Printing History in the Arabic-Speaking World 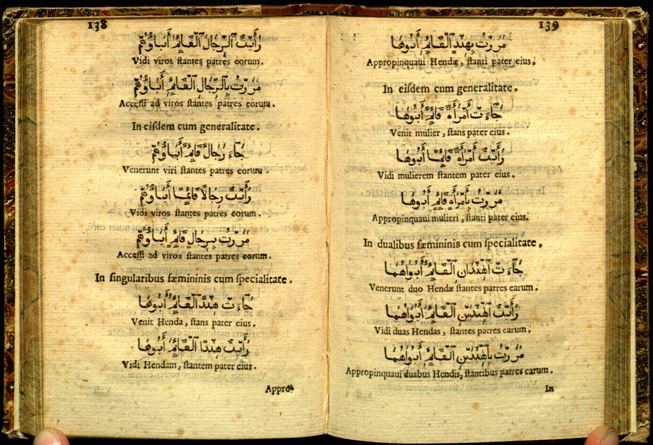 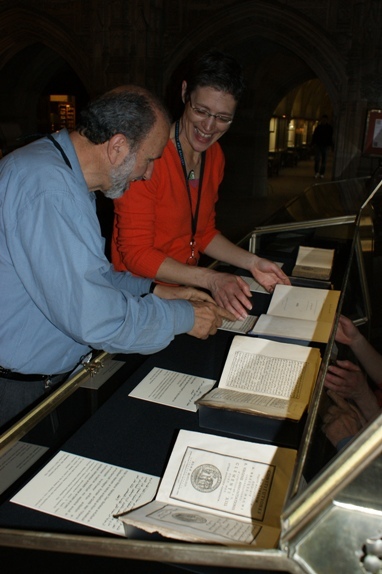 Simon Samoeil, Curator of the Near East Collection, and Margot Curran, Exhibit Conservator. 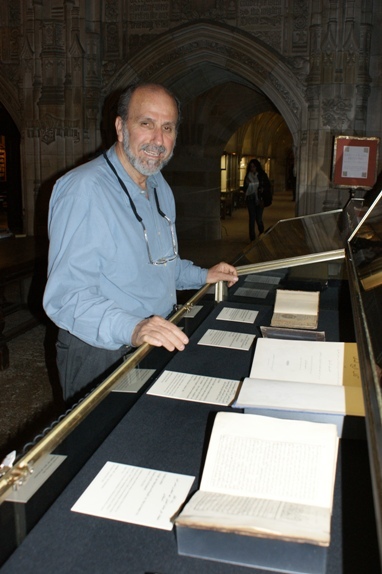 Simon Samoeil, Curator of the Near East Collection in 2009, arranging materials for the exhibit.

The contribution of the Arabs, though, to the art of printing is still under investigation. Scholars have found evidence that the Arabs have in deed known the art of block printing and have produced written evidences in addition to artifacts of Arabic block printed materials. These artifacts are scattered in museums and libraries in Europe and the United States and also in private collections. Several studies have been written on this subject (Cf. the excellent study: Enigmatic charms: medieval Arabic block printed amulets in American and European libraries and museums / by Karl R. Schaefer. Leiden; Boston: Brill, 2006).

The established tradition is that the moveable type and the wooden printing press which was modeled after the wine and olive press was invented by the German goldsmith Johann Gutenberg (1397?-1468). It is also said that Gutenberg was familiar with block printing and that he had worked on copper engravings with an artist known only by the epithet “Master of the Playing Cards.”

After learning to make paper and establishing paper mills throughout the Islamic Empire the Arabs wrote most of their handwritten manuscripts on paper. This tradition continued until the movable type printing press was widely introduced to the region after the French occupation of Egypt in 1798. For one reason or another, block printing among the Arabs was not developed, mostly, it seems, because those who practiced it were considered renegades, swindlers, sorcerers and magicians who wrote magical amulets to sell them in mass to simple people. On the other hand, block printing, however its degree of perfection, cannot rival the elegant calligraphy and decorations used in handwritten manuscripts.

Soon after the invention of the movable type in Europe, European scholars started to utilize other kinds of scripts. The first books to be printed in the Oriental languages in Europe were religious texts. In 1455 the Hebrew Bible was printed in Ferrara (Italy). The first Arabic book to be printed in movable type was also a religious book, Salat al-Sawa‘i bi-Hasab Taqs Kanisat al-Iskandariyah (صلاة السواعي بحسب طقس كنيسة الإسكندرية) “Prayers of the Hours According to the Liturgy of the Church of Alexandria.” It was printed in Fano (Italy). The Fano printing press was established by Pope Julius II (1443-1513). The second book was the Book of Psalms (in Hebrew, Greek, Arabic and Syriac with Latin translations). It was printed in 1516 in Genoa (Italy) at the order of the French king François I (1494-1547). Soon after, Arabic printing presses were established in other European cities; the most famous was the one founded by the Dutch scholar and Orientalist Thomas Erpenius (1584-1624) in Leiden (the Netherland). In this press Erpenius printed Arabic secular books, notably grammatical, poetical and historical books which he used in his teaching. The first Koran was printed in 1530 in Venice (Italy). Commentaries on the Koran by al-Baydawi (d. 1286?), al-Zamakhshari (1075-1144) and al-Suyuti (1445-1505) were printed in Padova (Italy) in 1632 with an introduction by the Catholic priest and scholar Louis (or Ludovico) Maracci (1612-1700).

The establishment of the Arabic printing presses in the Ottoman Empire was delayed due to the fear of the sultans that some biased persons might tamper with the sacred religious texts. Hence, in 1485 Sultan Bayezid II (1447 or 8-1512) issued a royal decree prohibiting the use of printed books. A similar decree was issued in 1515 by the Sultan Selim I (1470-1520). However, these prohibitions were not applied to books printed by Dhimmis (or People of the Book, i.e. Christians and Jews). Hence, Presses for printing Hebrew books were founded at the end of the 15th century in Constantinople and other cities in the Ottoman Empire.

The first Arabic press to be established in the Ottoman Empire was founded in Constantinople, ca. 1720 during the reign of the Sultan Ahmed III (1673-1736) by the endeavors of Ahmet Efendi Celebi (أحمد أفندي چلبي) and his son Sait (سعيد) who enlisted the expertise of the Hungarian convert to Islam, the talented artisan and expert printer, İbrahim Muteferrika (إبراهيم متفرقة) (1674?-1745). The first Arabic book to be printed in this press was a translation into Ottoman Turkish of the Arabic lexicon al-Sihah (الصحاح) of al-Jawhari (d. 1003?) in the year 1728.

However, it seems that the Greek Melkite Christian community of Aleppo (Syria) founded an Arabic press to print their religious and liturgical texts at the beginning of the 18th century. The first books to be printed were the Psalms and the Gospels (in 1706) both translated into Arabic by the Bishop ‘Abd Allah ibn al-Fadl al-Antaki (عبد الله بن الفضل الأنطاكي) (d. 1052). The second press in Aleppo was established by the Maronite Church in 1857 by the endeavors of the Bishop Yusuf Matar (يوسف مطر).

In Lebanon several Arabic printing presses were also established. The first was in the town of al-Shuwayr near Beirut, by the endeavors of the scholar Abd Allah ibn Zakhariya Zakhir (عبد الله بن زخريا زاخر) (1684-1748) who was originally a goldsmith from the city of Aleppo (Syria). The second was the famous American Press which was established in Malta and then transferred to Beirut by the Protestant missionary and Yale Graduate (class of 1821), the Revered Eli Smith (1801-1857) who started working on the translation of the Bible into Arabic. The translation was completed after his death by his colleague Cornelius Van Dyck, (1818-1895).

In Egypt, the first printing press started with Napoleon’s campaign in 1798 in which were printed leaflets and pamphlets of decrees and ordinances of Napoleon (1769-1821). However, when Muhammad Ali Basha ((محمد علي باشا (1769-1849) became the ruler of Egypt in 1805 he resumed the work of the press in 1819 and named it “al-Matba‘ah al-Ahliyah” (المطبعة الأهلية) “The National Press”. The press was then transferred to the district of Bulaq on the Nile from whence its name “Matba‘at Bulaq” (مطبعة بولاق), i.e. the Bulaq Press. The Bulaq Press produced magnificent works not only in the traditional Arabic/Islamic sciences but also in all aspects of modern sciences which were translated into Arabic from the different European languages by competent Egyptian scholars and translators.