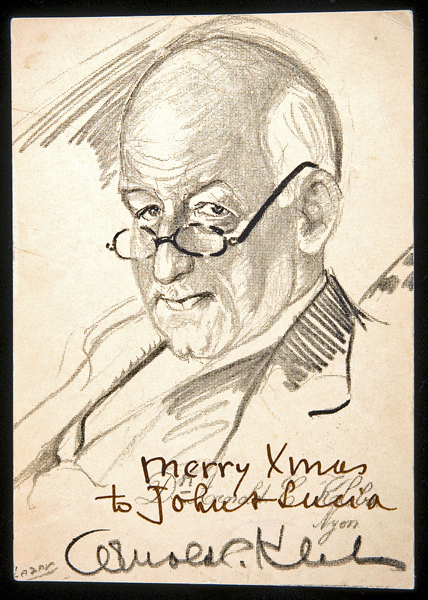 Arnold Carl Klebs was one of the three physician/historians who offered to donate their libraries of rare books to Yale if Yale would build a place to house them. That place was the Yale Medical Library, now the Harvey Cushing/John Hay Whitney Medical Library. Son of the famous pathologist and bacteriologist Edwin Klebs, Arnold Klebs followed his father from Switzerland to America in 1896, becoming a noted tuberculosis specialist in Chicago. In 1909, having inherited wealth, Klebs returned to Switzerland where he devoted his career to the history of medicine. Harvey Cushing and Klebs met at Johns Hopkins in the first decade of the twentieth century and became lifelong friends. Thirty years later, Cushing suggested to Klebs that he and John F. Fulton join him in pledging their books to become the nucleus of a new medical historical collection at Yale.

Born in Switzerland, Klebs lived in the United States from 1896 to 1909, becoming a citizen in 1904. During his period, he became one of the country’s leading experts on tuberculosis. In 1909, he returned to Switzerland to devote his time to books, bibliography, and the history of medicine. His special interests in collecting and bibliographical research were medical and scientific incunabula (the earliest books), tuberculosis, variolation (the predecessor to vaccination), the bubonic plague, and herbals. Through his meticulous research, Klebs became a well respected member of the nascent history of medicine community. In the 1920s and 1930s, his home at Nyon, “Les Terrasses,” on Lake Geneva, became famous for its library and as a welcoming meeting place for physicians and scholars. Klebs traveled to the U.S. frequently, the last time for Cushing’s 70th birthday party in New Haven in 1939. His only child, Sarah, married the Reverend Dr. George Stewart of Connecticut, a Yale graduate who presided over the dedication of the Yale Medical Library in 1941 and wrote the inspirational lines over the fireplace in the Historical Library Reading Room.

This exhibit on Klebs’ life and scholarship, featuring books donated by Klebs and photographs, was on display in the Medical Library Rotunda from February 1, 2008 to March 15, 2008.