The Dawn of Romanticism 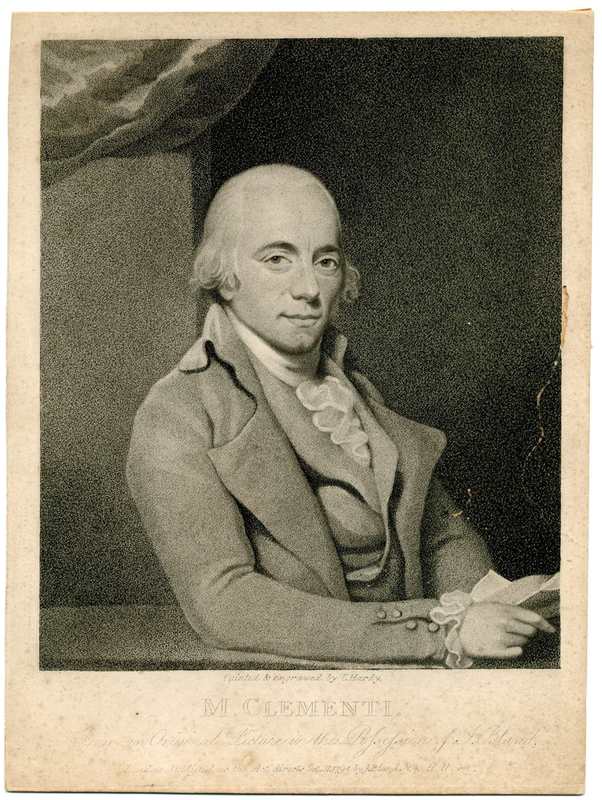 Muzio Clementi was born in 1752, four years before Mozart. But he lived well into the Romantic era; by the time of his death in 1832, Beethoven, Weber, and Schubert had died, Rossini had retired, Donizetti, Bellini, Meyerbeer, and Mendelssohn were already famous, and Berlioz, Chopin, and Schumann were beginning to come to prominence.

For too many music lovers today, Clementi’s name brings to mind only exercises and elementary sonatinas written for young pianists. But he was one of the greatest pianists of his era, the composer of impressive and ambitious works, and also a successful music publisher and piano manufacturer. Born in Rome, Clementi spent most of his career in England; he was so highly esteemed there that he was buried in Westminster Abbey.

This engraving is from a collection of drafts and research material belonging to Florence Wilshire, the author of an unpublished biography of Clementi. She was Clementi’s great-granddaughter.

The Gilmore Music Library also owns a letter that Clementi wrote to his father on Christmas Eve, 1781. Later same day, he and Mozart both performed for the Holy Roman Emperor Joseph II in a famous piano competition (which was declared a tie). 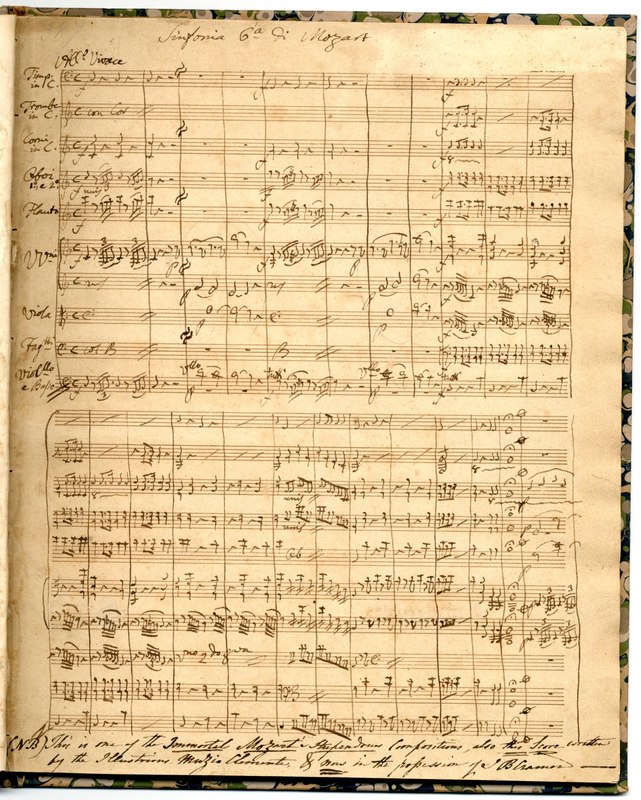 Misc. Ms. 582
Purchased with income from the Horowitz Fund

This manuscript score of Mozart’s celebrated Symphony No. 41 (often called the “Jupiter” Symphony) is in the hand of Muzio Clementi. In earlier centuries, when music publication was expensive and labor was cheap, copying music by hand was a cost-effective practice. Countless works circulated only in manuscript copies, and many young composers honed their skills (and expanded their libraries) by making handwritten copies of whatever music was available to them. But Clementi’s motive for copying this symphony is mysterious. His manuscript is apparently based on the first published edition of the full score (London: Cianchettini & Sperati, ca. 1810). By that time, Clementi had long been a famous musician and a prosperous businessman. He would have had no trouble purchasing published scores, and if he required a manuscript copy for some reason, he could have hired a copyist. Perhaps this time-consuming project is a mark of his esteem for his erstwhile rival, Mozart.

This manuscript belonged to the eminent pianist Johann Baptist Cramer, a student of Clementi. 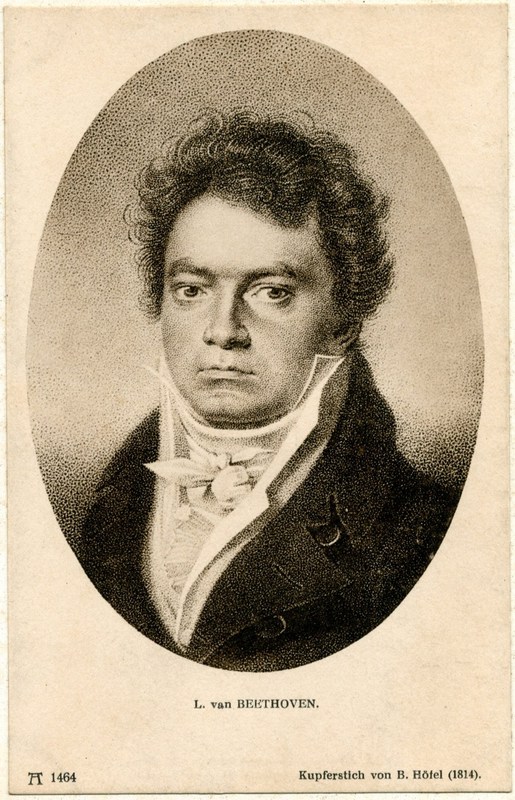 Ludwig van Beethoven Engraving by Blasius Höfel, based on a pencil drawing by Louis Letronne 1814

Ludwig van Beethoven (1770–1827) is widely acknowledged as one of the greatest composers in the history of music. In the transition between Classical and Romantic, he is the dominant figure. He began his career squarely in the Classical tradition typified for modern listeners by the music of Haydn and Mozart. Indeed, Beethoven was a student of Haydn, and was deeply influenced by Mozart. Most historians and critics classify Beethoven as the culmination of the Classical era. But if he was not fully Romantic in his own right, Beethoven exercised an overwhelming influence on the composers who came after him. They followed in his footsteps in countless ways, ranging from the technical (such as placing the second group of a sonata form in a key other than the dominant or the relative major) to the social (such his belief that a great musician belonged on an equal footing with the aristocracy). His Ninth Symphony, with its vast scale, narrative arc (including the quotation of earlier movements in the finale), and use of voices in an instrumental genre, was especially influential. 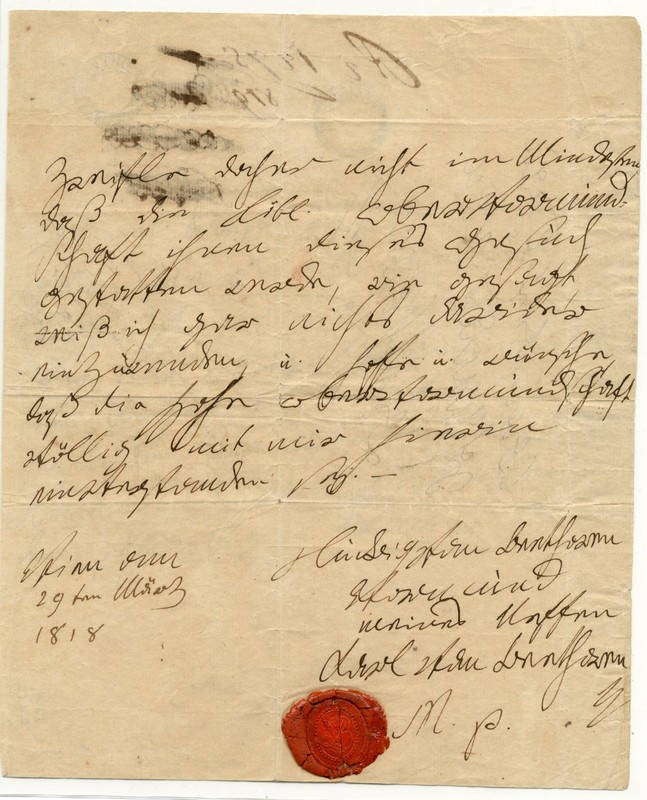 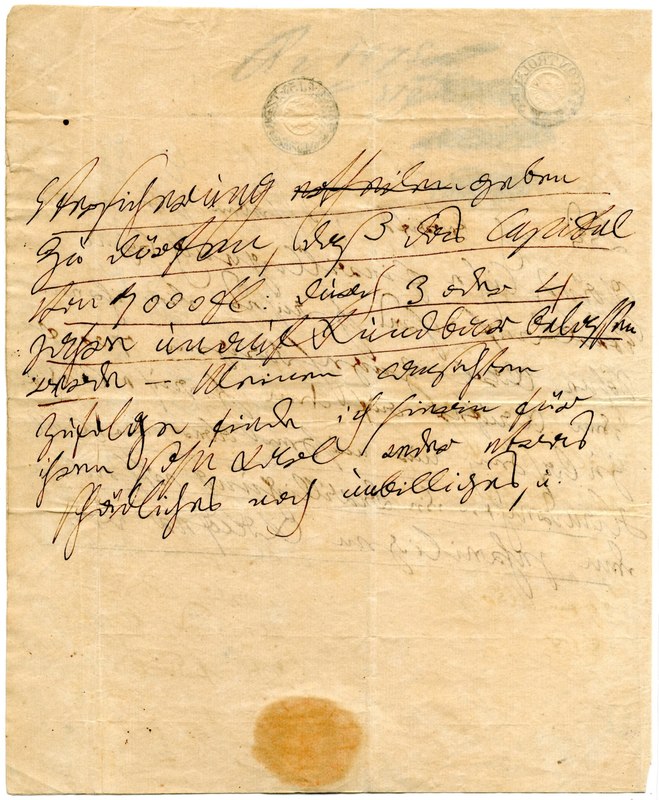 After the death of his brother, Beethoven fought for and eventu­ally gained custody of his nephew Karl, over the objec­tions of the boy’s mother. Moreover, because she was female, the law did not respect her authority to sell her own house, which legally belonged to her son. Since he was too young to make such decisions, she needed to seek permission from his guardian: the composer with whom she had already had legal disputes. Fortunately, Beethoven did not abuse his power; in this letter, he gave his consent:

So far as it concerns me, you have my full consent in sell­ing your house to allow the 7000 fl. belonging to your son Karl to re­main as a mortgage on it, but the Provincial Court should grant per­mission that assurance may be given the prospective buyer that the capital of 7000 fl. may not be called for during three or four years. There is in my opinion nothing unfair or damaging to your son herein and I have no doubt that the Surrogate’s Court will grant you this request. As stated I have no objections what­ever to make, and hope and wish that the Surrogate’s Court will herein fully agree with me.

Guardian of my nephew, 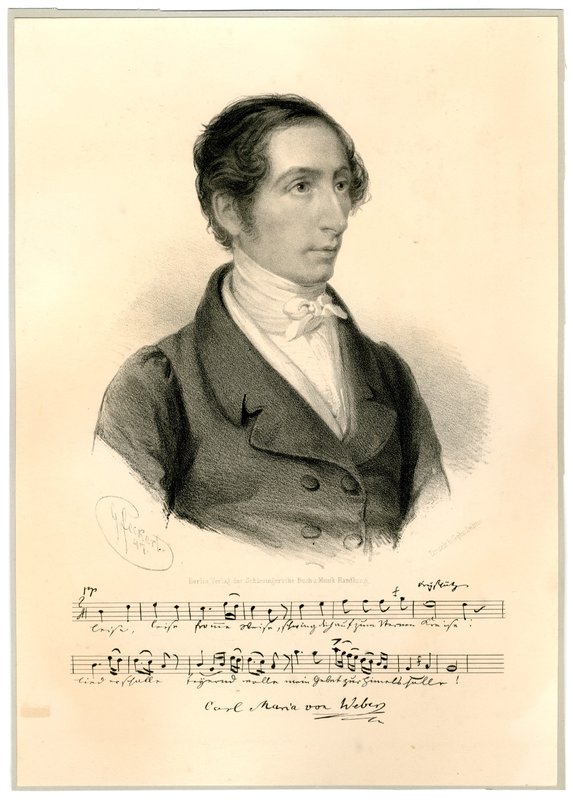 Carl Maria von Weber (1786–1826) ranks among the most important early Romantic composers, known for his virtuosic piano music, his clarinet concertos, and especially for his popular and influential German Romantic operas, of which Der Freischütz is the most famous. The musical quotation at the bottom of this engraving is “Leise, leise, fromme Weise,” Agatha’s prayer in Freischütz. 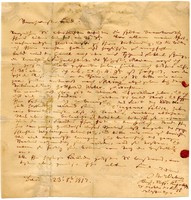 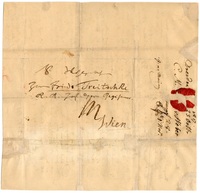 In 1817 Weber had recently become Kapellmeister in Dresden, and in this letter he accepts Georg Friedrich Treischke’s offer to provide advice on lighting in the opera house. (Treitschke was an opera producer and poet.) Weber also mentions three weddings. Treischke had recently married. Weber had composed a cantata for the upcoming wedding of the Princess Maria Carolina of Saxony and the Grand Duke of Tuscany. And on November 4, Weber himself married the singer Caroline Brandt.

This manuscript comes from the Gilmore Music Library’s Opochinsky Collection, which contains about 300 musical manuscripts, letters, and other documents written by prominent musicians. They were assembled by David Opochinsky, an engineer whose company, Titra-Film, provides subtitles and dubbing for the movie industry. Opochinsky, who was born in the Polish city of Lódz in 1900, was trained as a violinist at the Moscow Conservatory. (His success in business eventually enabled him to purchase violins by Stradivari and Guarneri.) He also played the piano; in fact, he got his start in the movie business as a pianist for silent films. Opochinsky moved to the United States in 1942, and he began collecting rare music documents in 1950. He died in 1974, and in 1986 his heirs generously donated his collection to Yale University. In this exhibit, the Schubert manuscript and coin and the Rachmaninoff letter are also from the Opochinsky Collection, which also includes compositions, letters, or autographs by C.P.E. Bach, Haydn, Mozart, Mendelssohn, Liszt, Schumann, Tchaikovsky, Dvorák, Grieg, Scriabin, Kreisler, Casals, Bartók, Stokowski, Stravinsky, Berg, Prokofiev, Copland, and many other eminent composers and performers. 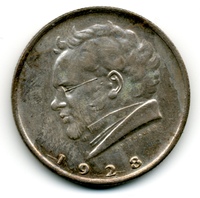 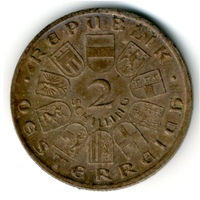 Franz Schubert (1797–1828) was clearly a Romantic composer, but many of his works draw upon Classical models. Listeners often mistake his Symphony No. 5 for Mozart, thanks to its overall style as well as its thematic similarities to Mozart’s Symphony No. 40. And while Schubert composed that symphony when he was still in his teens, even the masterpieces of his maturity reveal a debt to Beethoven. All three of his last piano sonatas (D. 958, 959, and 960) are strongly influenced by Beethoven, each in a different way. The first of these takes its opening theme from Beethoven’s 32 Variations in C minor. The structure of the finale of the second is modeled on Beethoven’s Sonata Op. 31, No. 1. And the finale of the third owes an obvious debt to the same movement of Beethoven’s String Quartet Op. 130.

Instead of displaying an ordinary portrait of Schubert, we present his likeness on a coin. When the Austro-Hungarian Empire disintegrated at the end of World War I, Austria suddenly became a small country. But the loss of territory and military power did little to diminish Austria’s remarkable musical heritage. In 1928, it honored Schubert, on the occasion of the 100th anniversary of the composer’s death.

For more information on the Opochinsky Collection, see the caption for the Weber letter in this exhibit. 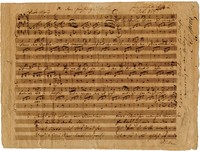 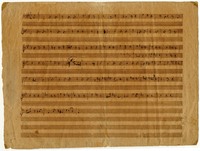 The German song (or Lied, in German) is one of the most important genres of the Romantic era, and Schubert was its most important exponent, in both quantity and quality.

Schubert composed “An den Frueling” (or “An den Frühling,” as it is spelled in modern German) in 1817. The text is by Friedrich von Schiller (1759–1805). Esteemed as one of the greatest German poets and playwrights of the age, Schiller is perhaps best known to American music lovers as the author of the “Ode to Joy” that Beethoven chose for the finale of his Ninth Symphony.

This title occupies no fewer than four numbers in Otto Erich Deutsch’s catalogue of Schubert’s music. Our manuscript is no. 245. Schubert later revised it (transposing it from A major to B-flat major), and that version is catalogued as D. 587. He also composed another song based on the same text, D. 283, as well as a setting for male voice quartet, D. 338.

On the verso of the manuscript, we find a sketch for a completely different song, “Die Blumensprache” (D. 519).

This manuscript formerly belonged to three generations of the Goldman family, all of whom were prominent musicians: first the brothers Sam and Nahum Goldman, then their nephew Edwin Franko Goldman, and finally his son, Richard Franko Goldman. David Opochinsky purchased it in 1968. For more information on the Opochinsky Collection, see the caption for the Weber letter in this exhibit. 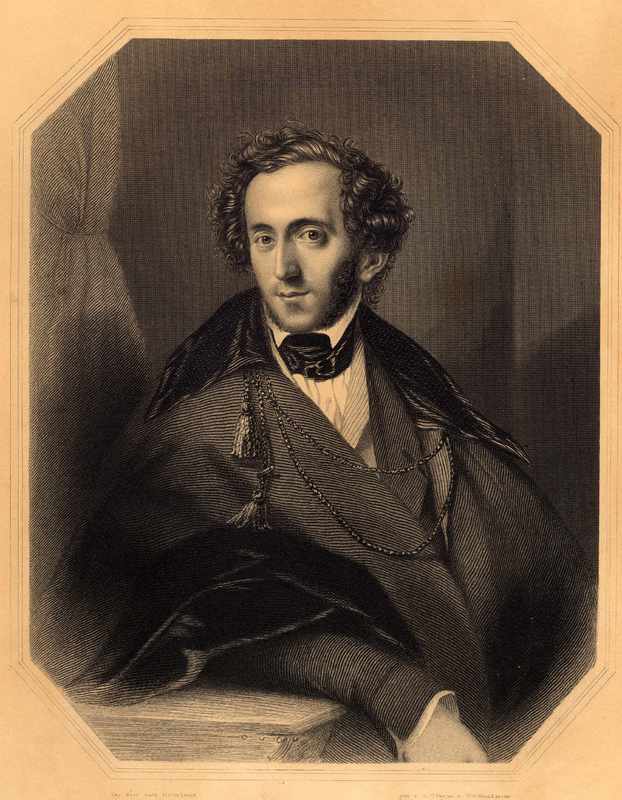 Of the major early Romantic composers, Felix Mendelssohn (1809–1847) was the most classically inclined. Although his works include their share of stormy, passionate, or sentimental passages, they often display a gracefulness, balance, and lightness of touch that can recall Haydn and Mozart. Nor were Mendelssohn’s links to the music of the past limited to the Classical composers; he was interested in many aspects of early music, and he was a key figure in the Bach Revival. 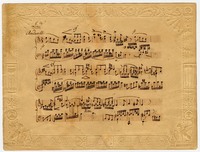 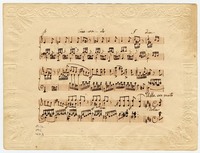 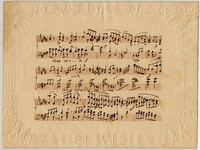 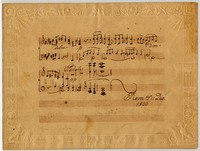 Many romantic composers produced numerous short character pieces for piano, and Mendelssohn was no exception. He frequently used the title “Lieder ohne Worte,” or “Songs without Words.” The piece displayed here is an example. The manuscript is dated December 11, 1830. It was published in 1833 as Opus 19, No. 2. Mendelssohn gave evocative titles (such as “Hunter’s Song” and “Gondolier’s Song”) to some of the pieces in Op. 19, but No. 2 has no title. The manuscript consists of two pages, with writing on both the front and back. Mendelssohn’s musical handwriting was always meticulous, and he wrote this piece on embossed music paper.

This manuscript formerly belonged to Vladimir Horowitz (1903–1989). The most celebrated pianist of the 20th century, Horowitz became a wealthy man from his concert fees and record royalties, so he was able to acquire a number of important musical artifacts. In addition to this manuscript, Horowitz owned letters by Mendelssohn, Liszt, Robert and Clara Schumann, and Tchaikovsky. Horowitz and his wife, Wanda Toscanini Horowitz, donated their papers to Yale between 1986 and 1992, but their collection of rare letters and manuscripts was cataloged separately, so this manuscript is not formally considered part of the Horowitz Papers.