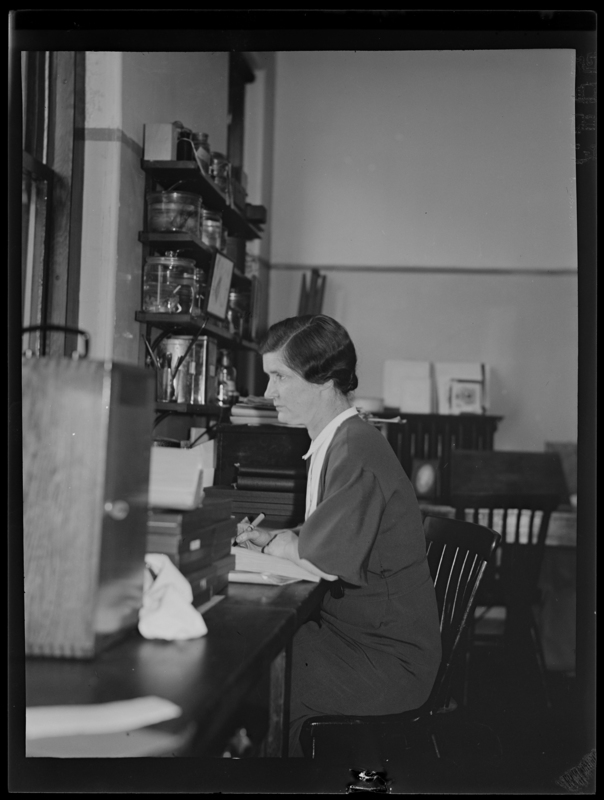 Photograph by Richard U. Light, courtesy of the Harvard Medical School Archives at the Countway Library of Medicine

Dr. Cushing hired Louise Eisenhardt (1891-1967) of Ramsey, New Jersey as a secretary and editorial assistant in 1915 to help with the technical writing for Tumors of the Nervus Acusticus (1917). As Eisenhardt became more involved in the neurosurgical aspects of Dr. Cushing's work, she decided to pursue her own medical education. She graduated from Tufts Medical School in 1925 with the highest academic record ever obtained at the school and completed an internship at the Boston Hospital for Women and Children. 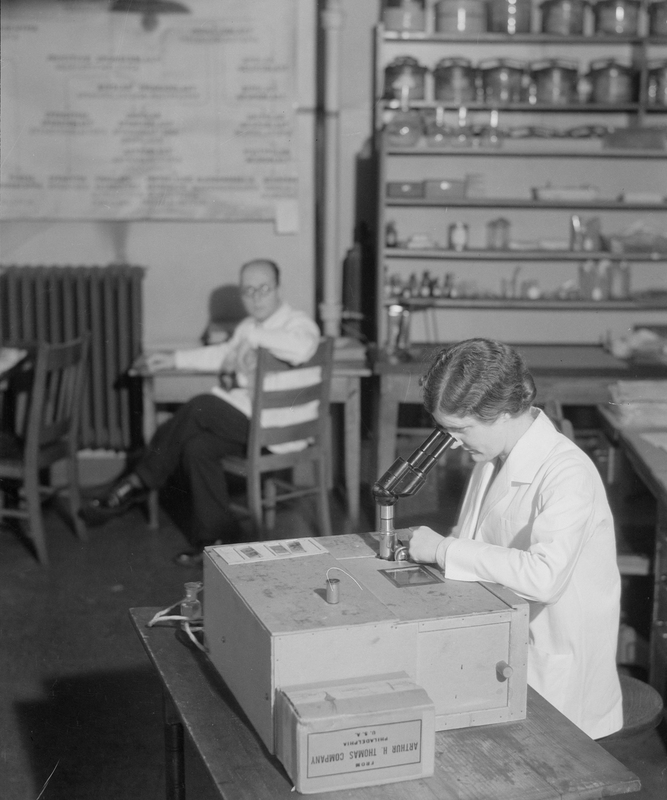 Photograph by Richard U. Light, courtesy of the Harvard Medical School Archives at the Countway Library of Medicine

From 1928 until 1934, Louise Eisenhardt held the position of Junior Associate in Surgery at the Peter Bent Brigham Hospital. Eisenhardt worked as Cushing’s pathologist, diagnosing and classifying the different kinds of tumors that Cushing removed. She is shown here in the laboratory at the Peter Bent Brigham Hospital around 1932. Perhaps tellingly, most photographs of Eisenhardt from this period show her working in the lab.

She was known for her use of the "supravital technique," which allowed for faster diagnosis of tumors by using a fresh sample of living cells, compared with the traditional technique of examining a sample that has been "fixed" or preserved. Eisenhardt was considered one of the leading world experts on tumor diagnosis. 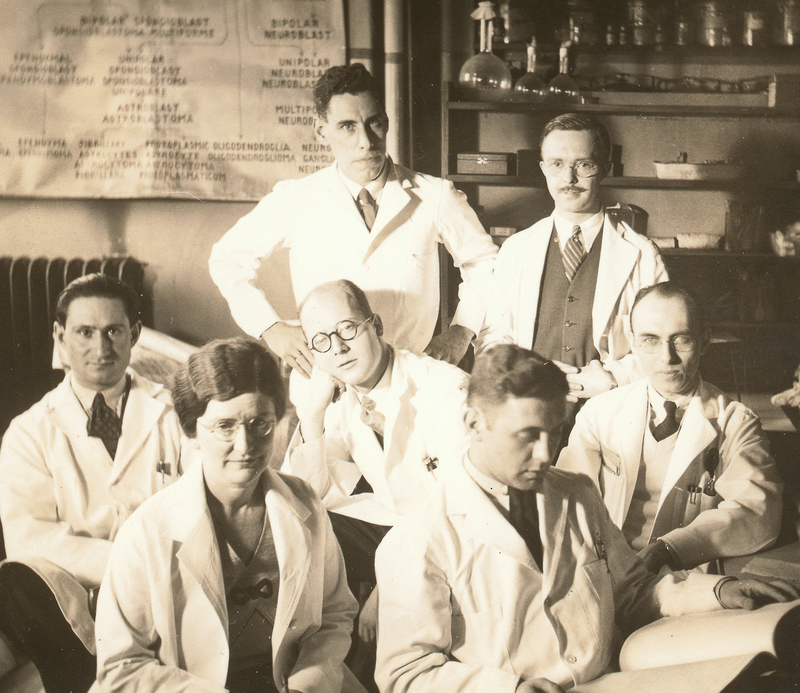 During her time as Junior Associate in Surgery, Louise Eisenhardt also authored a number of scientific publications in collaboration with Cushing and pathologist Dr. Percival Bailey, and taught a course on neuropathology at Tufts Medical School. All the while, she maintained records of Cushing’s surgical outcomes in her "little black book," from which she was able to calculate postoperative mortality rates for the different types of tumors. 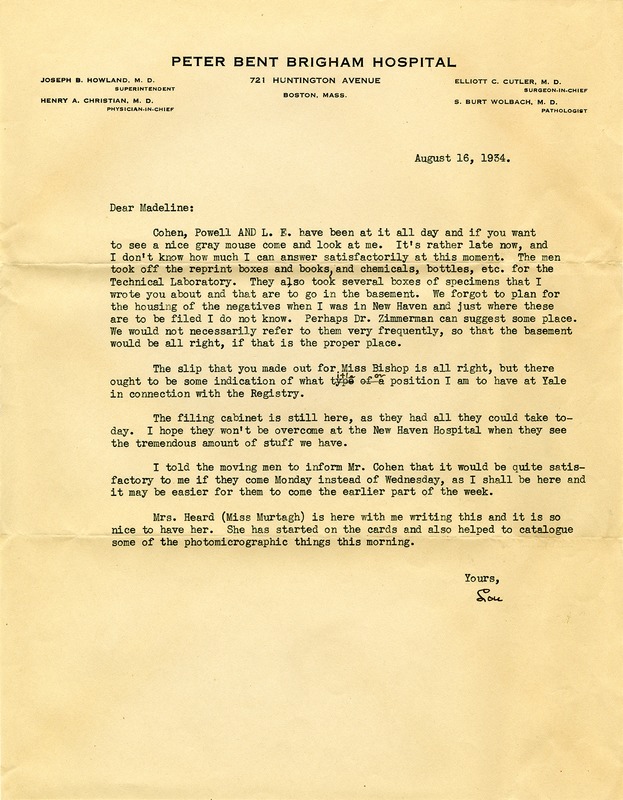 When Harvey Cushing retired from the Brigham Hospital and relocated to New Haven in 1933, Louise Eisenhardt followed shortly thereafter. Dr. Eisenhardt moved to New Haven in September 1934, bringing with her over 2,000 pathological specimens collected over the course of Dr. Cushing's career. From 1934 until 1936, Dr. Eisenhardt and Dr. Cushing worked diligently to have the clinical records pertaining to each pathological specimen reproduced photographically and brought to New Haven. This letter from Dr. Eisenhardt ("Lou") to Madeline Stanton details some of the challenges of moving such a "tremendous amount of stuff" to a new home. 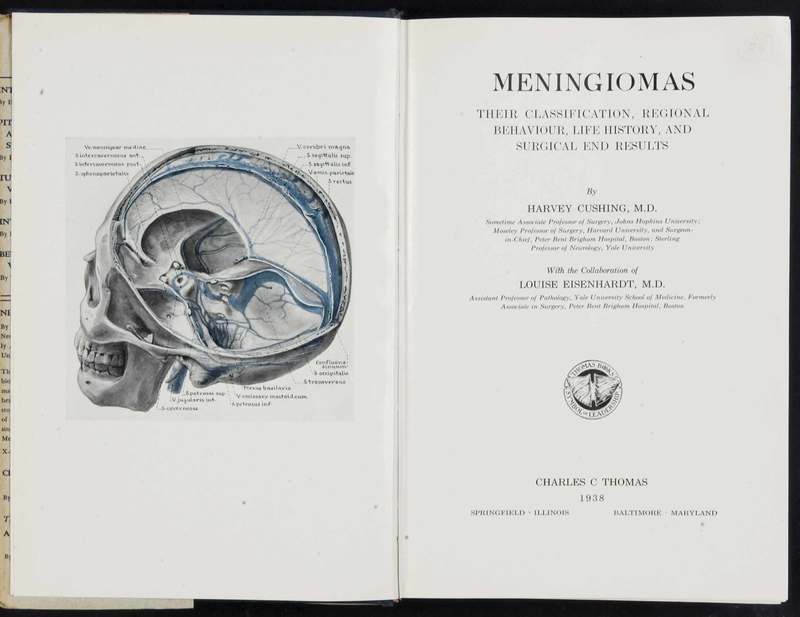 During their time at Yale, Eisenhardt and Cushing were also working on a book that Cushing had started years before, the final part of Cushing's trilogy on intracranial tumors. The monograph was published in 1938 as Meningiomas: Their Classification, Regional Behavior, Life History and Surgical End Results by Harvey Cushing with the collaboration of Louise Eisenhardt. 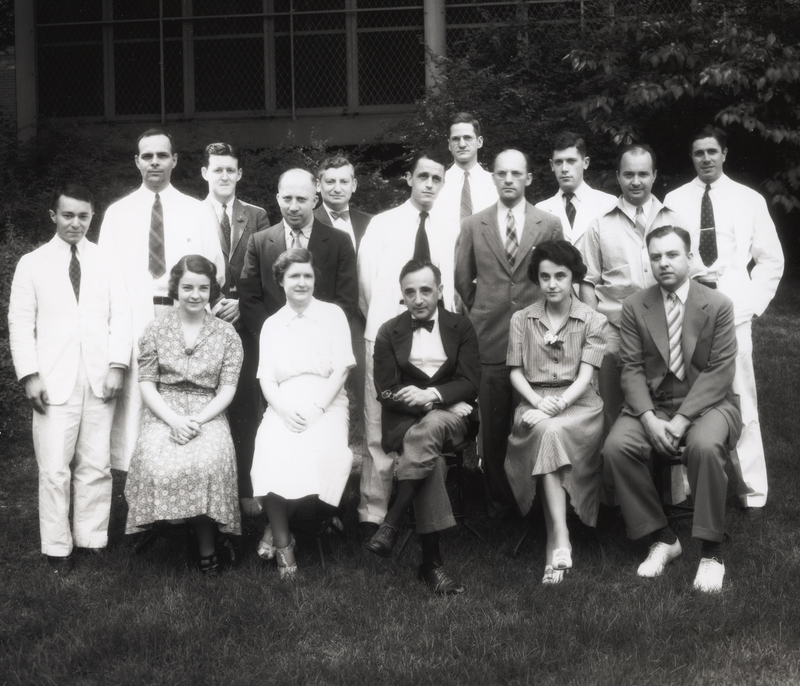 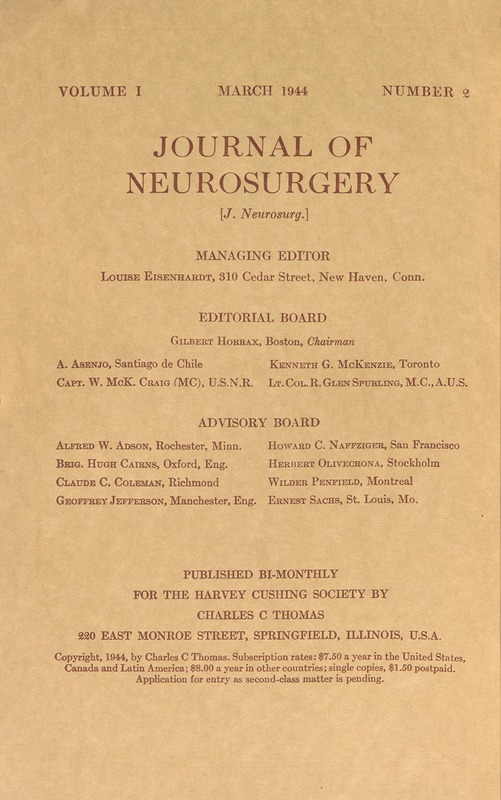 In 1943, Dr. John F. Fulton and the Harvey Cushing Society established the Journal of Neurosurgery, which was the first English-language journal dedicated to the topic.

With her scientific and secretarial experience, Dr. Eisenhardt was the perfect choice to serve as the new journal’s managing editor, a position she would hold for 22 years. 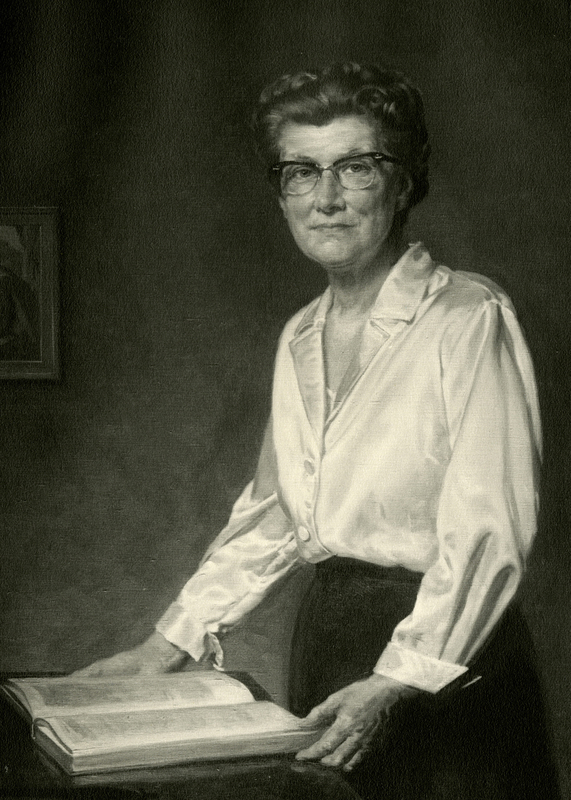 Her health in decline, Dr. Eisenhardt retired from the Journal of Neurosurgery in 1965. She died in 1967 at her sister’s home in Rockport, Massachusetts.

Today, a portrait of Dr. Eisenhardt hangs in the Brady Memorial Laboratory at the Yale School of Medicine, and her legacy as the curator of the Brain Tumor Registry lives on in the Cushing Center, in the basement of the Yale Cushing/Whitney Medical Library.