Unlike sign languages, manually coded languages are signed versions of spoken or written languages. Fingerspelling, a form of manually coded language, has been in use for centuries. Monks who took vows of silence, for example, were known to communicate using fingerspelling, and the Venerable Bede (672-735 CE) famously recorded a system for spelling and indicating numbers on the hands. Since at least the 1600s deaf students have been taught the manual alphabet with different handshapes for each letter, while gloves marked with the alphabet offered another option for spelling out words.

Individual signs representing particular words have also been developed for cryptic, silent, or supplementary communication among hearing people. Native American Sign Languages are a good example of such “alternate” or “auxiliary” systems. Plains Indian Sign Language facilitated communication among at least forty different language groups. It survives in storytelling, ceremonies, and prayers, and some Deaf Native Americans also use Plains Indian Sign Language, which they have enriched through primary use. 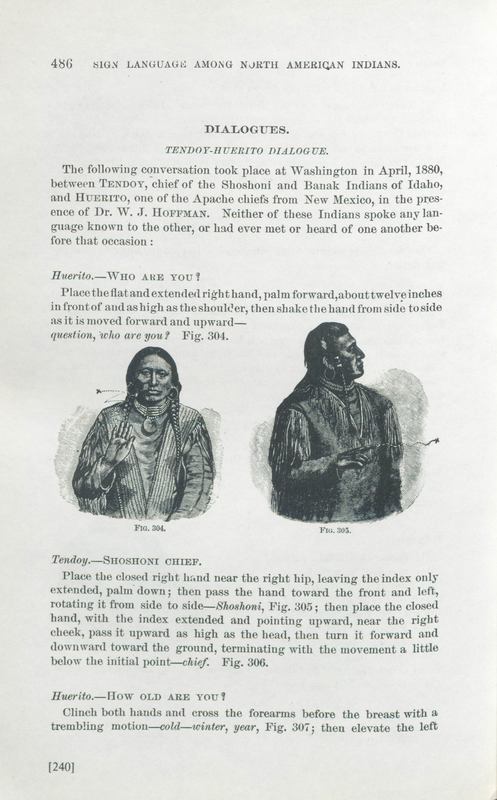 The ethnologist Garrick Mallery (BA Yale 1850) grew interested in indigenous gestural communication systems while stationed with the Signal Corps in Dakota Territory in the 1870s. He later produced several major reports on “hand talk” for the Bureau of American Ethnology, identifying the system’s significance as a lingua franca. Intrigued by the number of Native American signs that appeared to have analogs in Deaf sign languages, Mallery, like many, pondered the possibility of an underlying, primitive system of universal human gestures. In 1880, he took seven members of the Ute tribe to the National Deaf-Mute College (later Gallaudet) in Washington and was intrigued to find that the two groups seemed to understand each other. 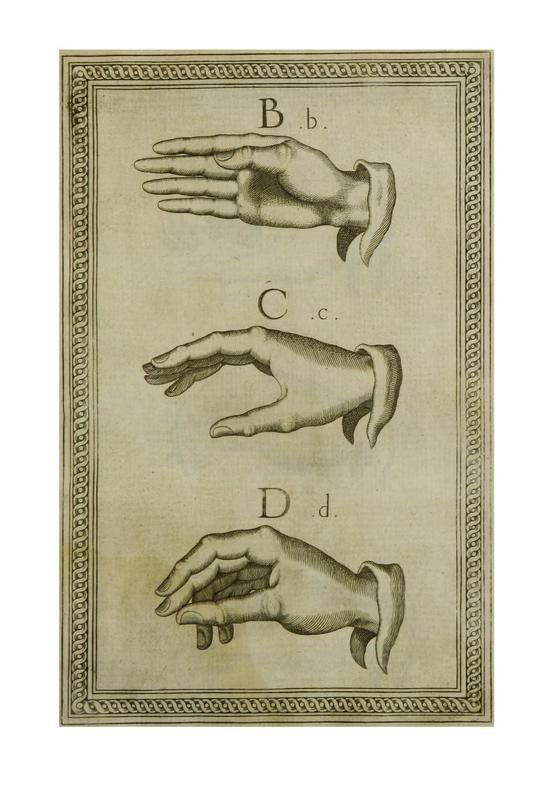 This book, Simplification of the Letters and the Art of Teaching Mutes to Speak, is the first known text to focus on deaf instruction and is emblematic of the rise of deaf education in sixteenth- and seventeenth-century Spain, led by the Benedictine monk Pedro Ponce de León (1520-84). The engravings by Diego de Astor document a one-handed manual alphabet intended specifically for deaf communication and education. This system strongly influenced French Sign Language and eventually American Sign Language, which shares many of the same letter signs. 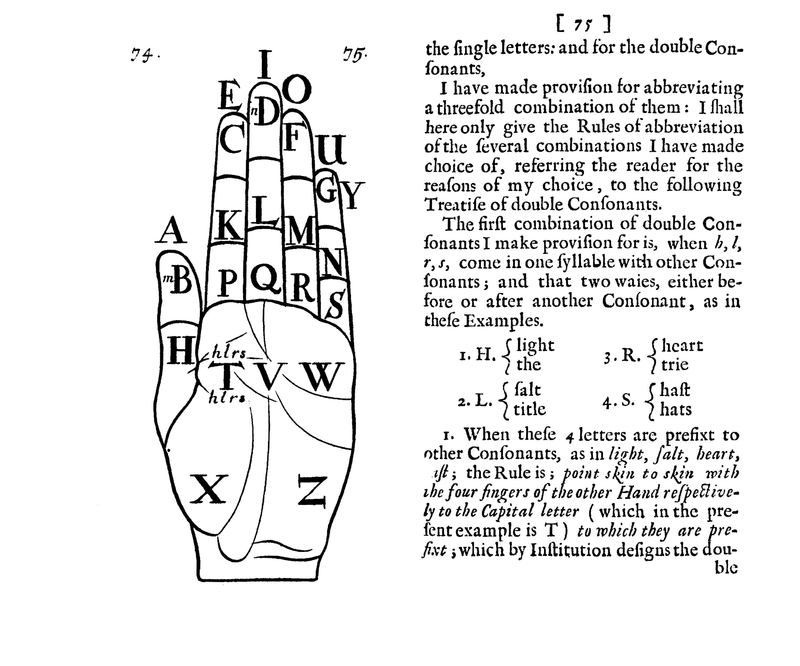 Didascalocophus, or, The Deaf and Dumb Mans Tutor 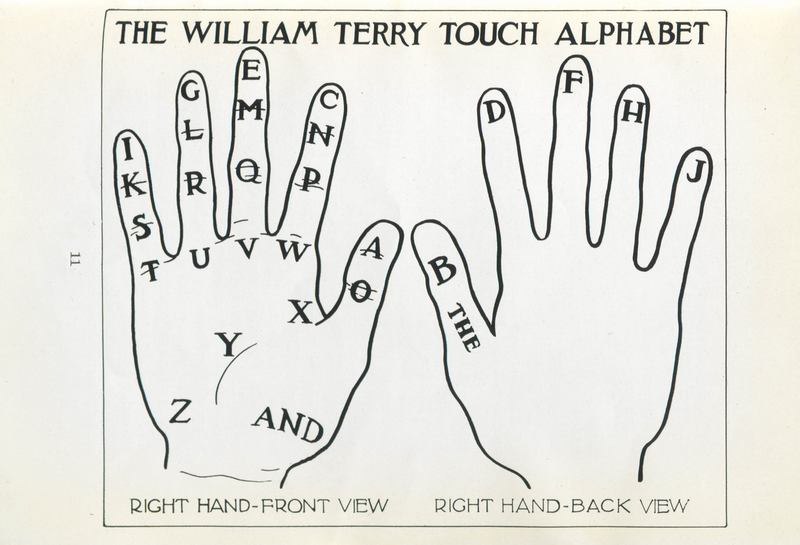 Connecticut’s William Terry (1822-1908), who was both deaf and blind for the last fifteen years of his life, also advocated manual spelling. A labeled glove allowed people unfamiliar with the system to communicate with the Deaf or deafblind person. Social integration and normalization are dominant themes in this brochure, which states that the “talking” glove “can be used without attracting the least attention by two people sitting near each other in church, at the theatre, on a train, or elsewhere.” 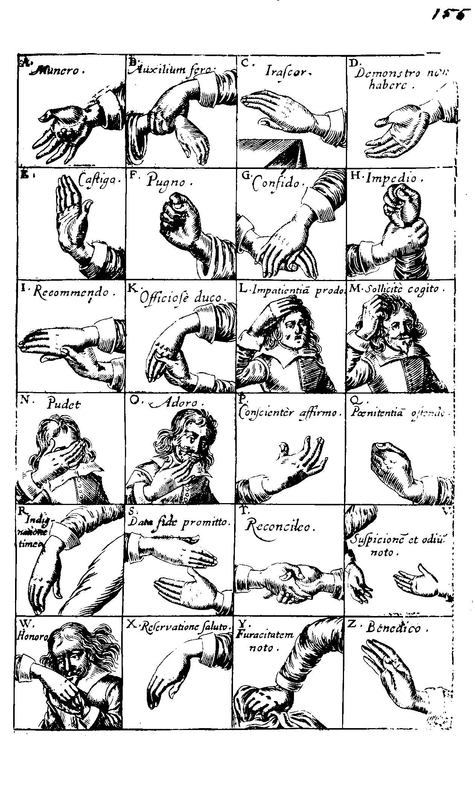 Chirologia, or the Naturall Language of the Hand

Chirologia, by English physician and natural philosopher John Bulwer, analyzes gestures, which Bulwer saw as an innate form of communication. Bulwer used examples from a number of different contexts, including the Bible, ancient Rome, and jokesters in Billingsgate market, to illustrate what he believed were universal uses of human gesture. Bulwer’s interest in communication would soon inspire him to publish Britain’s first book on the education of deaf children, although he generally advocated oralism and speech reading rather than signing. 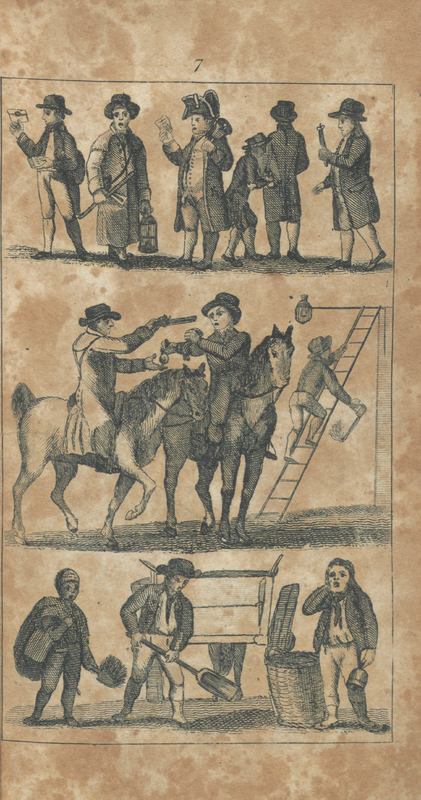 Vocabulary for the Deaf and Dumb

Thomas Braidwood founded Britain’s first school for the Deaf and Dumb in Edinburgh in 1760, and his nephew, Joseph Watson, was headmaster at the London Asylum for the Deaf and Dumb, a charity school established in 1792. Watson declared, “Give [the Deaf] language, and you, in a great measure do away their defect, and bring them on a level with those of their age and station in life.” The school specialized in vocational training for deaf children between the ages of nine and fourteen. Although he generally endorsed oralism, reading, and writing for the purposes of assimilation, Watson acknowledged that it was virtually impossible to teach Deaf students without learning at least some of their sign language and the manual alphabet. He developed this extensive set of illustrations to accompany his Instruction of the Deaf and Dumb (1809). The images would help Deaf students learn about things not readily available in the classroom, including occupations, foods, and highway robbery.