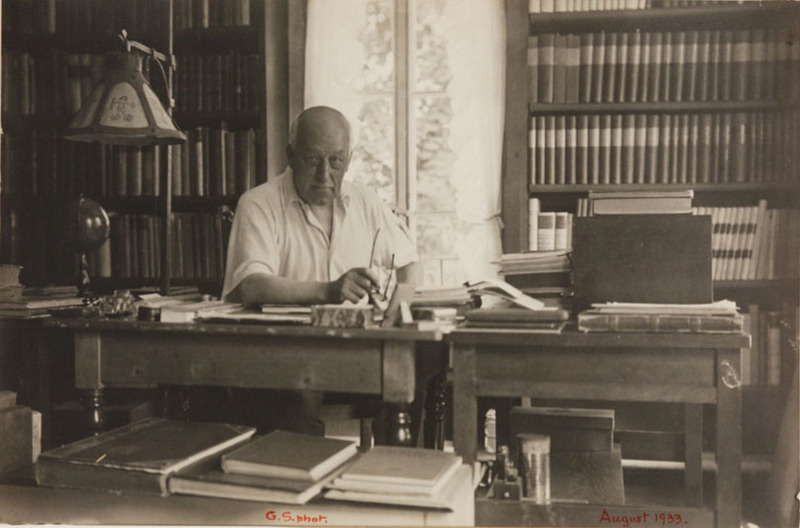 In 1896, after receiving his medical degree from the University of Basel, Arnold Klebs followed his father, the famous Swiss bacteriologist Edwin Klebs, to the United States.  Cushing and Klebs became acquainted in 1903 when Klebs was working with William Osler at Johns Hopkins.  In America, Klebs practiced medicine as a sanatorium director and tuberculosis specialist in Citronelle, Alabama and Chicago and edited a major work on the subject.  In 1909, he returned to his native Switzerland, eventually settling in his villa, Les Terrasses, on Lake Geneva. 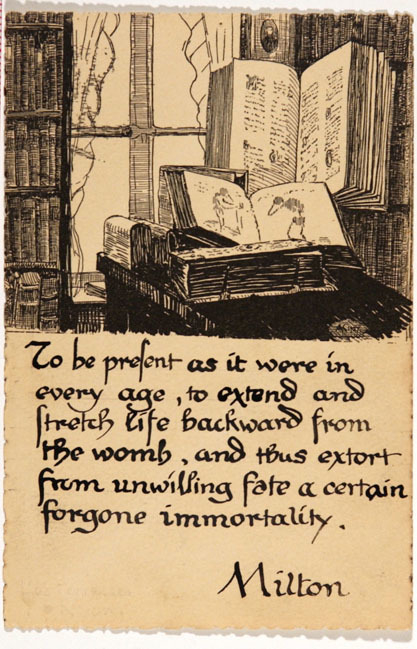 Christmas card designed by Klebs with one of his favorite quotations by Milton.

A historian, bibliographer and humanist, Klebs specialized in collecting reference works about incunabula, plague tracts, herbals, books and pamphlets on tuberculosis, and books on inoculation and vaccination.  Although Klebs’ only direct connection with Yale was through his son-in-law, the Rev. Dr. George Stewart, Cushing convinced his friend to promise his collections to Yale.  Klebs visited New Haven for Cushing’s 70th birthday party in April 1939, but because of the war and ill health, never got to see the completed library. 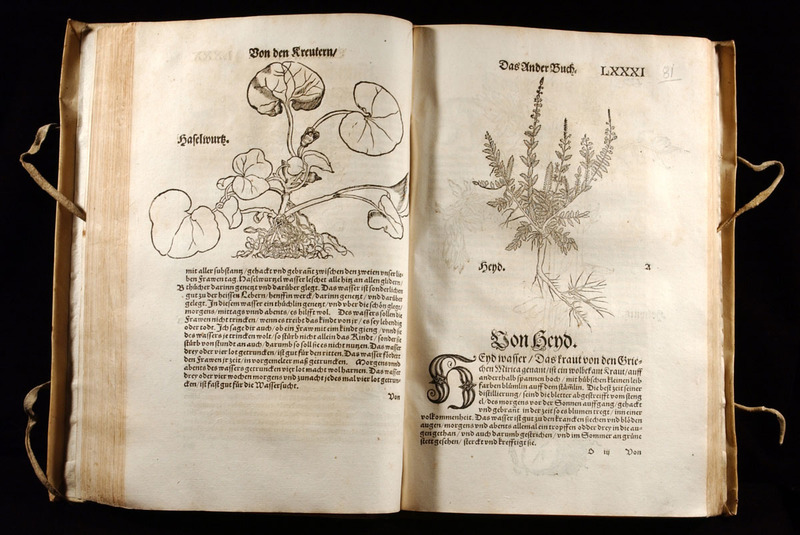 This 16th century book by the surgeon Brunschwig on preparation by distillation of all parts of herbs “for all uses of the entire human body” is an example of an early herbal collected by Arnold Klebs. 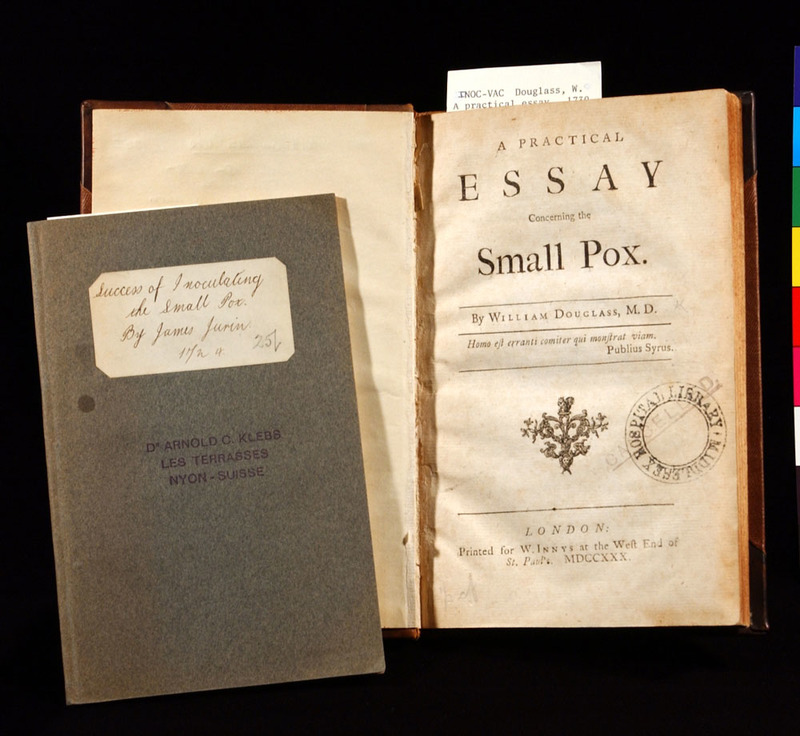 William Douglass, a British-born and educated physician living in Boston, one of earliest Amerian physicians to hold an M.D., championed the use of inoculation for smallpox. Inoculation had been first used in America by Dr. Zabdiel Boylston in the 1721-22 smallpox epidemic in Boston. In inoculation, a small amount of smallpox pus from an infected person was injected into the arm of a healthy person to create a light case of the disease and consequent immunization.  Inoculation was later replaced by Edward Jenner’s cowpox vaccination for smallpox.   Klebs collection of inoculation and early vaccination literature, which formed the basis for his early bibliography, numbered over 1000 items.

Inoculation, first used in England and America in the 1720s, spawned a huge and controversial pamphlet literature in Europe and America. Jurin was a British physician and inoculator who wrote several tracts in favor of the procedure. Klebs stamped his books instead of using a bookplate. 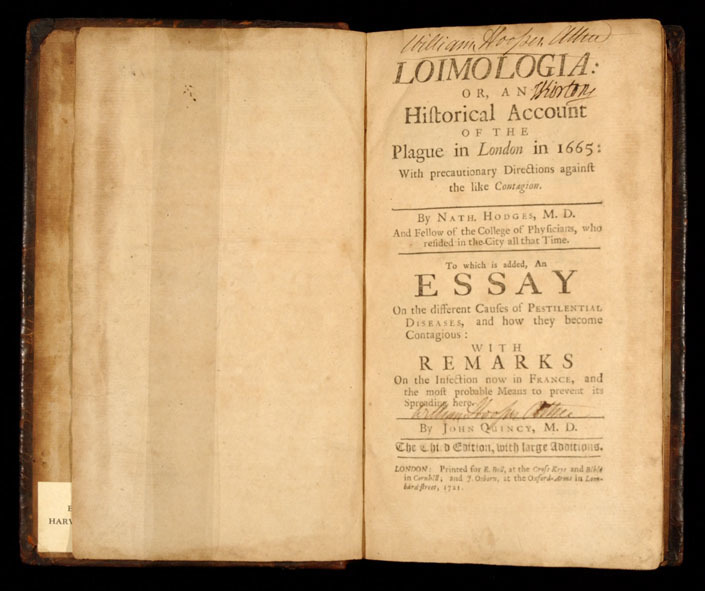 Nathaniel Hodges, 1629-1688
Loimologia: or, An Historical Account of the Plague in London in 1665: with Precautionary Directions Against the Like Contagion. To Which is Added, an Essay on the Different Causes of Pestilential Diseases, and How They Became Contagious ... By John Quincy, M.D.
London, Printed for E. Bell [etc.] 1721
Gift of Arnold C. Klebs.

This work has been described as the best medical record of the Great Plague of London in 1665.  Hodges, physician of city of London, performed heroic service in the epidemic. His book was first translated from Latin into English in 1720.  It is one of many works on the plague collected by Klebs.  With coauthors, Klebs edited reprints of early German and French plague tracts. 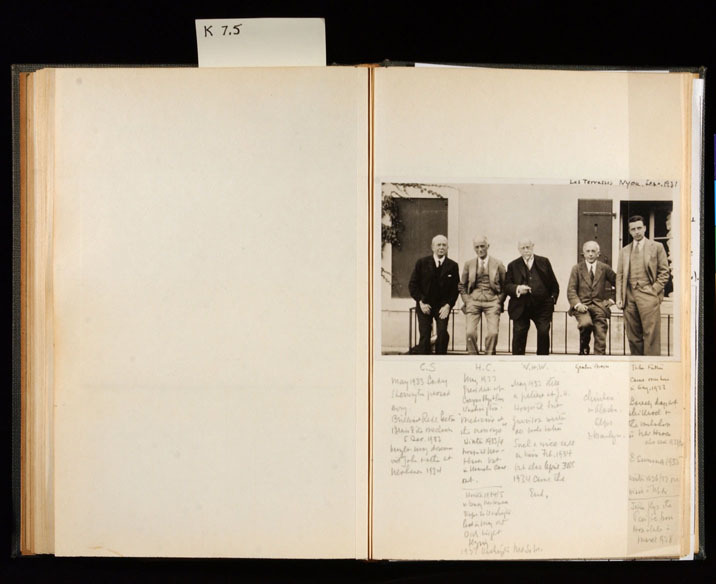 Klebs’ home on Lake Geneva was frequently visited by physician and scientist travelers.  Two wooden panels from Les Terrasses with signatures of visitors are on opposite sides of the entry to the Historical Library offices. 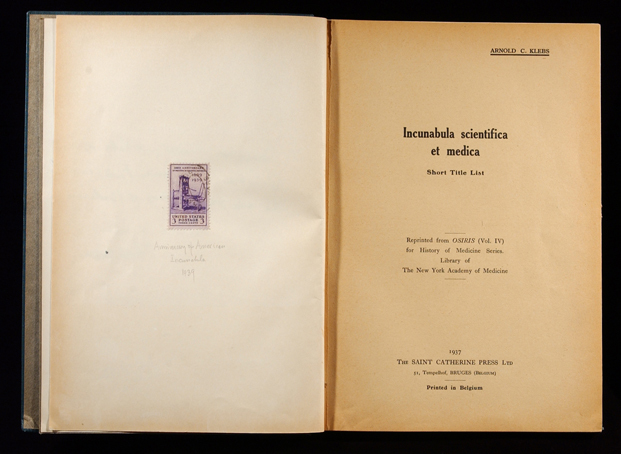 This catalog, representing an immense amount of work, listed all known incunabula on scientific and medical topics. Klebs was working on a more complete version at the time of his death.