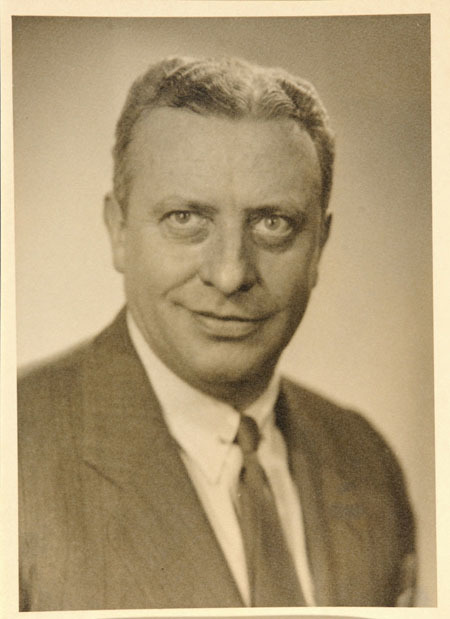 John Fulton, the youngest of the three founders of the Historical Library, trained in medicine and physiology at Harvard and Oxford, and came to Yale in 1930 as professor of physiology. He was already deep into collecting books when he served as a resident and disciple of Harvey Cushing at the Peter Bent Brigham Hospital. The two men shared a close friendship based on both scientific and historical interests. Like Cushing, Fulton became a bibliophile, bibliographer, and historian. His special collecting interest was physiological works from the 16th to 18th century. In addition to his major texts in physiology, Fulton authored or coauthored biographies of Harvey Cushing, Benjamin Silliman, and Michael Servetus, and bibliographies of Fracastoro’s poem Syphilis, Luigi Galvani and his nephew Aldini, Richard Lower and John Mayow, Joseph Priestley, Robert Boyle, and early works on anesthesia. Fulton became the first chairman of the Department of History of Medicine at Yale in 1951 with offices across the hall from the Historical Library offices. 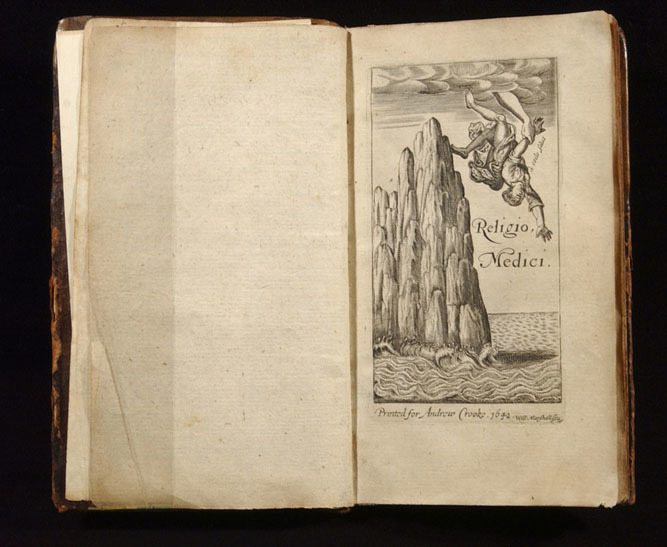 Religio medici, essays on the religious philosophy of a practicing doctor, has been said to be one of the most famous works of English literature written by a physician. Browne circulated manuscripts privately, not intending to publish, but two unauthorized editions appeared in 1642, and the work has been printed scores of times since. Fulton collected a large number of editions. Osler and Cushing both loved the work. A copy was placed in Osler’s coffin. Cushing named a book of his essays Consecratio medici after Religio medici. The engraved title page was by William Marshall. 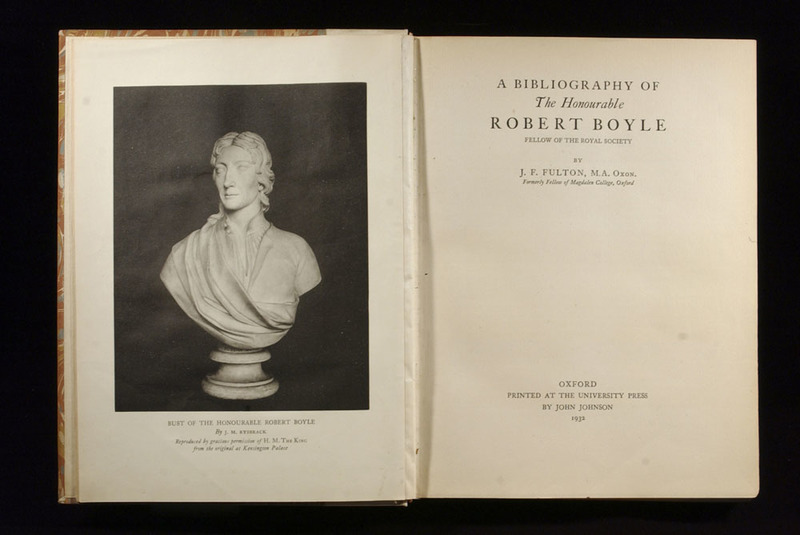 John F. Fulton’s A Bibliography of the Honourable Robert Boyle (Oxford: Oxford University Press, 1932) remains the authoritative bibliography for works of the famous 17th century natural philosopher, chemist, and physiologist. Any book dealer today offering a book by Boyle continues to identify it by its Fulton number. This copy belonged to Klebs and is bound in partial vellum. 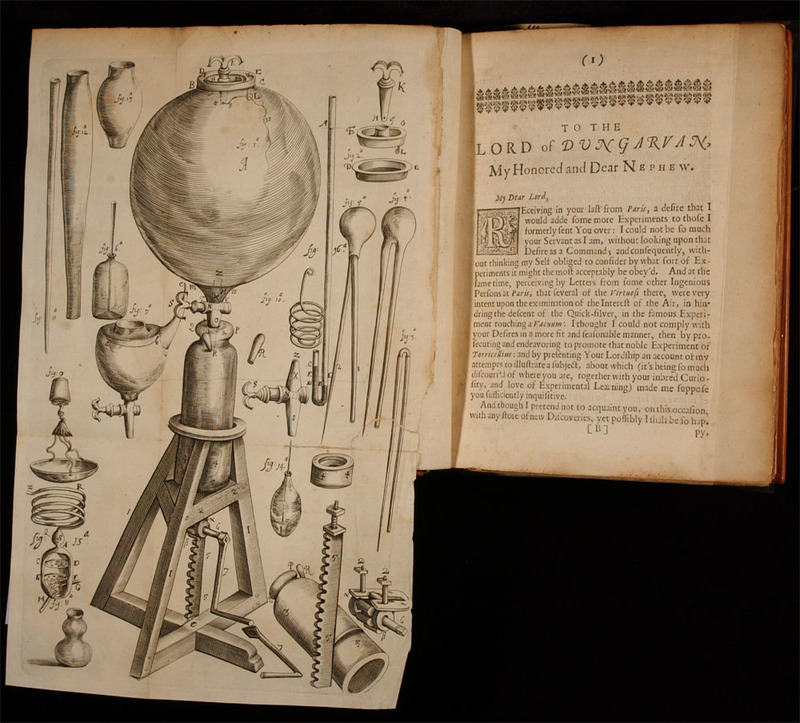 Robert Boyle, 1627-1691
New Experiments Physico-mechanical, Touching Spring of the Air, and its Effects.
(Made, For the Most Part, in a New Pneumatical Engine).
Oxford: H. Hall for T. Robinson, 1662.

Robert Boyle was one of the chief figures associated with the new Royal Society of London founded after the Restoration. Fulton collected editions of Boyle’s many works on chemistry, physics, physiology, and religion, as a basis for his definitive bibliography. Although Boyle was not a physician, he wrote also on remedies. The plate shows Robert Boyle’s pneumatic machine used in studies of the air, including animal respiration. 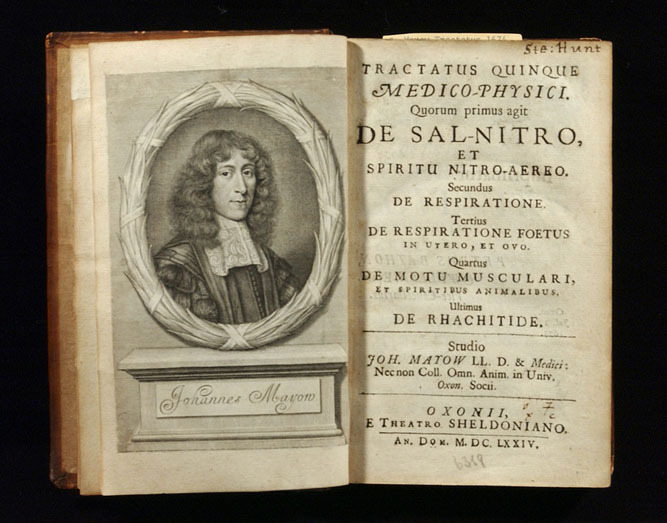 Fulton collected and wrote a bibliography of the works of two 17th century British physiologists Richard Lower and John Mayow. Mayow was the first to locate the production of animal heat in the muscles, and suggested that the purpose of breathing was to extract specific life-sustaining particles from the ambient air. This book, five treatises on nitro-aerial spirits, respiration, fetal respiration, muscular motion, and rickets, is a medical classic. 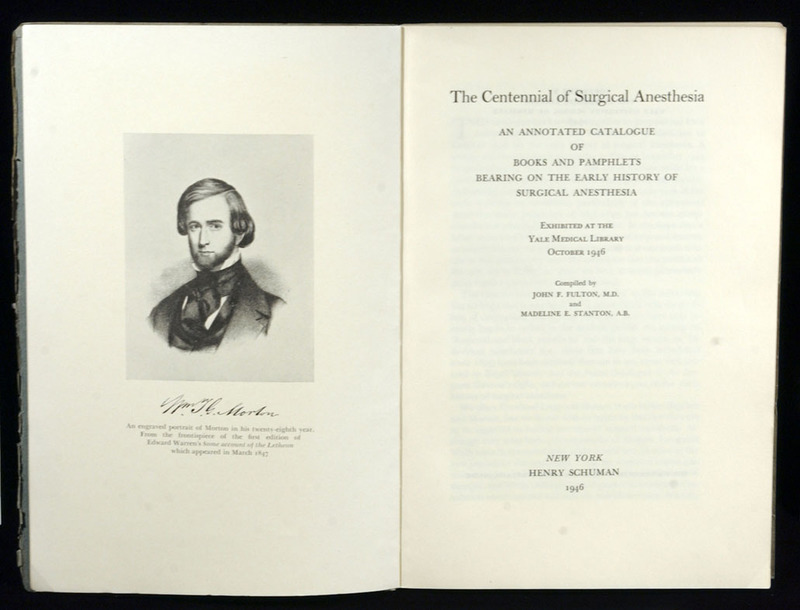 Fulton’s collection of works on anesthesia, on which this bibliography is based, includes works on early methods of relieving surgical and dental pain, works related to Crawford Long, Horace Wells, William T.G. Morton, Charles Jackson, James Young Simpson, and other early books and pamphlets. 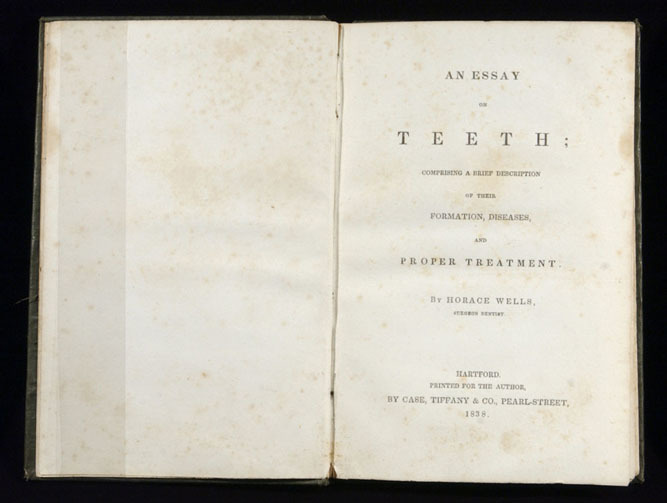 Horace Wells, 1815-1848
Essay on Teeth; Comprising a Brief Description of Their Formation, Diseases, and Proper Treatment.
Hartford: Printed for the author, 1838.
Gift of John F. Fulton

This early American work on dentistry, part of Fulton’s anesthesia collection, was published by Hartford dentist Horace Wells when he was only 23. Wells discussed here the problem of toothache and other dental pain and the available means of alleviation. In 1844, he successfully used nitrous oxide anesthesia in his dental practice, but the demonstration of his method at Harvard Medical School proved a failure. Wells destroyed his life trying to wrest credit for the discovery of anesthesia from William T.G. Morton who successfully demonstrated ether anesthesia in October 1846.

Fulton Fund bookplate. The original design was cut circular. The fund is used to purchase rare books and prints for the Historical Library.  Also pictured is Fulton’s own bookplate, found in the books he donated. 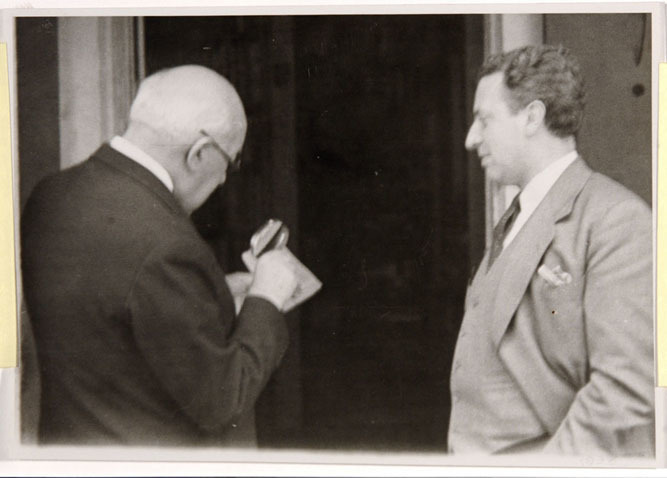 Arnold Klebs and John Fulton, who along with Harvey Cushing co-founded the Medical Historical Library.