The Making of a Renaissance 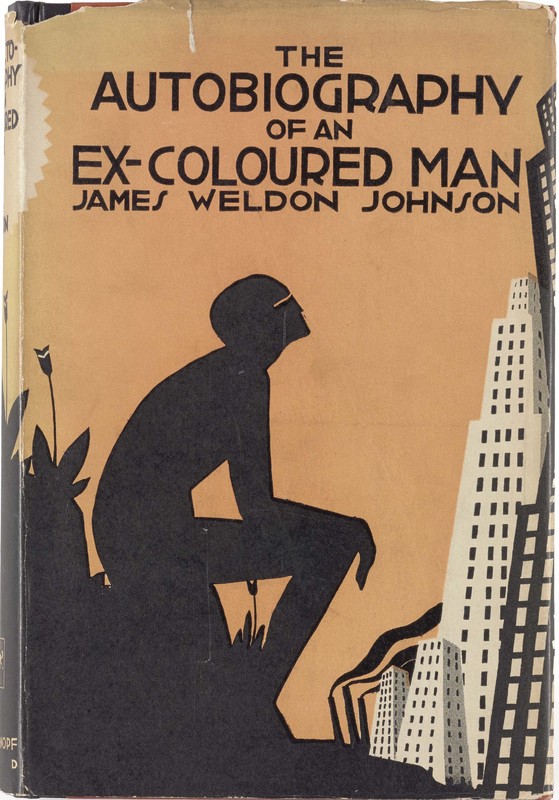 Scholars have debated what conditions made for the explosion of African American cultural production in the 1920s and ‘30s, with some crediting changes in American intellectual life at the turn of the century, and others pointing to the consolidation of African American political power with the formation of the National Association for the Advancement of Colored People in 1909 and the National Urban League in 1910. Most historians agree that the tremendous demographic shift known as the Great Migration, in which African Americans began moving from the rural South to northern urban centers in droves beginning in the 1910s, concentrating in enclaves in Harlem, New York, U Street in Washington, D.C., and Bronzeville in Chicago, made the cultural collaborations of the Renaissance possible.

The Harlem Renaissance was also made by the individuals involved, whose partnerships, sponsorships, and friendships were the engine of cultural production. Aesthetic debates led to manifestoes from many corners about the purpose, style, and proper subject matter of African American art. Meanwhile, a culture of prizes, publishers newly amenable to black writing, and patrons eager to support budding artists made for previously unseen economic support for young artists.

The Push for Art 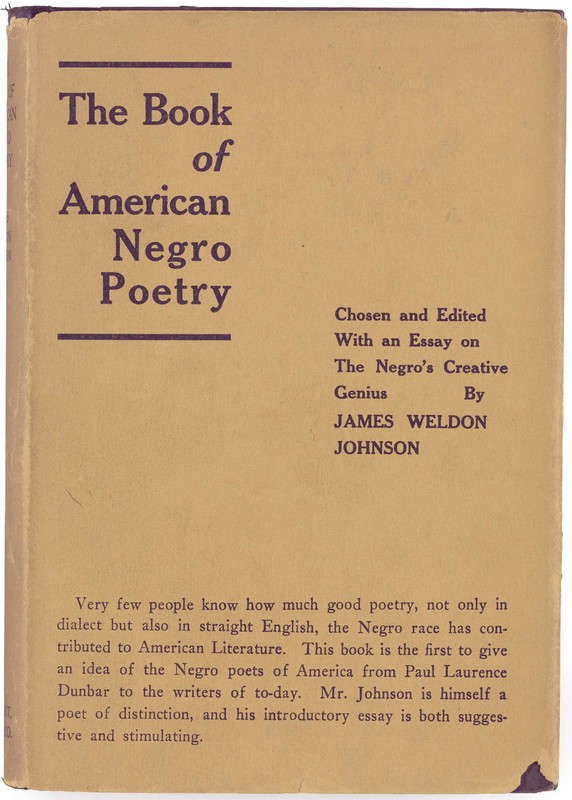 Critics throughout the Harlem Renaissance called for art that would make a point. Whether through fiery didacticism or “the sheer humanness and beauty of their own story,” as Charles Spurgeon Johnson described it, intellectual leaders such as James Weldon Johnson, Charles S. Johnson, Alain Locke, and W. E. B. Du Bois all insisted that African American art would serve as a front in the fight for racial equality. Both Johnsons made this program explicit, James Weldon in the preface to his anthology The Book of American Negro Poetry, and Charles Spurgeon in his Opportunity editorial announcing annual prizes to be given for creative writing. Though W. E. B. Du Bois’s claim that “all art is propaganda and ever must be” is often quoted out of context, his statement indicates his recognition that all art, whether making an explicitly political statement or not, can influence attitudes, biases, and assumptions. At the same time, Alain Locke described the emerging art as a “spiritual emancipation” and a “spiritual coming of age” for African American artists, who were newly free to take on a wider range of subjects.

What is Negro Art? 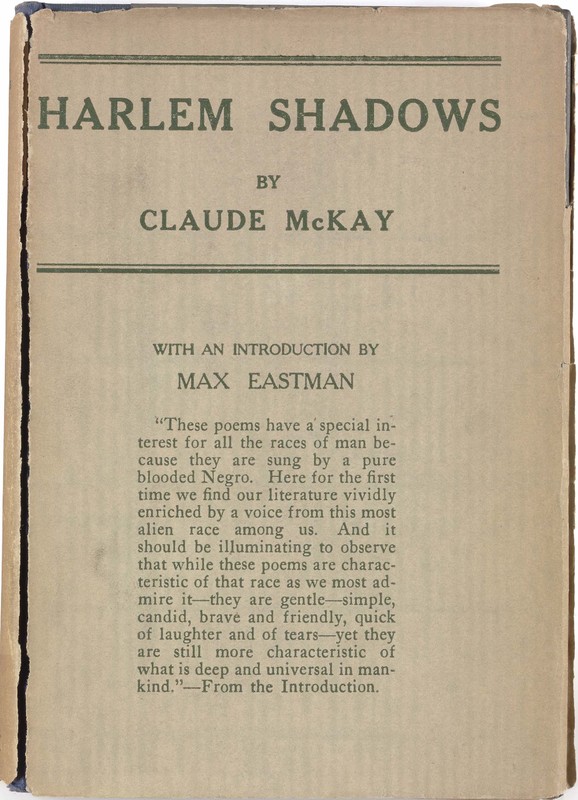 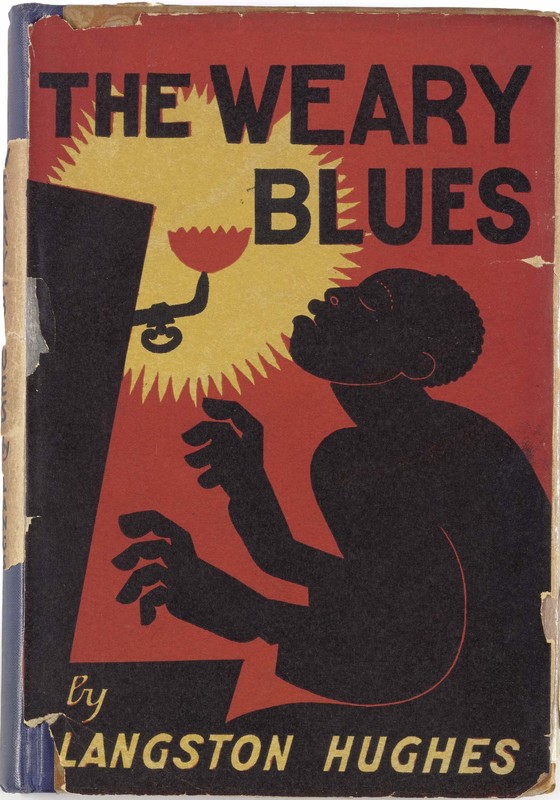 The Weary Blues by Langston Hughes, 1926

As declarations were made about the purpose of art, the artists themselves experimented with style and content. While poets like Claude McKay and Countée Cullen “adhered to older traditions,” as McKay put it, writing sonnets, villanelles, and other rhymed verse, Langston Hughes, Sterling Brown, and James Weldon Johnson experimented with incorporating African American vernacular rhythms, borrowed from blues music and folk culture, into their formal poetry. Jessie Fauset remarked to Hughes in a letter, “your free verse is too free”; she also objected on more than one occasion to Hughes’s choices of content. Hughes, McKay, Zora Neale Hurston, and others all embraced portrayals of ordinary people, unrestrained by mores of respectability, sometimes to the chagrin of some middle-class readers. Hurston, in particular, saw the everyday African American “folk” as a source for unique attitudes, behaviors, and language.

"How shall he be portrayed?" 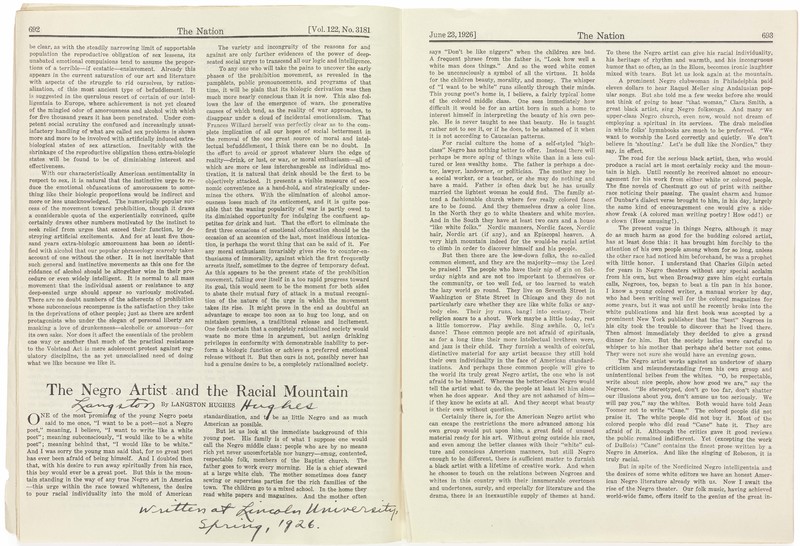 Signed copy of "The Negro Artist and the Racial Mountain" by Langston Hughes, 1926

In 1926, Jessie Redmon Fauset, in her capacity as literary editor of The Crisis, circulated a survey whose responses would be published over a series of issues. Langston Hughes, perhaps reacting immediately to the tendentious questions, began composing a hasty response on the back of the letter enclosing the questionnaire. These thoughts formed the basis for his seminal essay “The Negro Artist and the Racial Mountain,” in which Hughes contrasted the pretensions of the “smug Negro middle class” with “the so-called common element,” deciding in favor of the latter. An often-forgotten essay preceded Hughes in The Nation: George S. Schuyler’s “Negro-Art Hokum,” which excoriated the very idea of differences between the races in the United States. Schuyler blamed Black American writers’ emphasis on folk culture for creating the illusion of racial difference, insisting that there were no inherent characteristics of either race. After Hughes’s second volume of poems, Fine Clothes to the Jew, earned him the title “poet low-rate of Harlem,” Hughes answered back with the essay “These Bad New Negroes” in the Pittsburgh Courier. 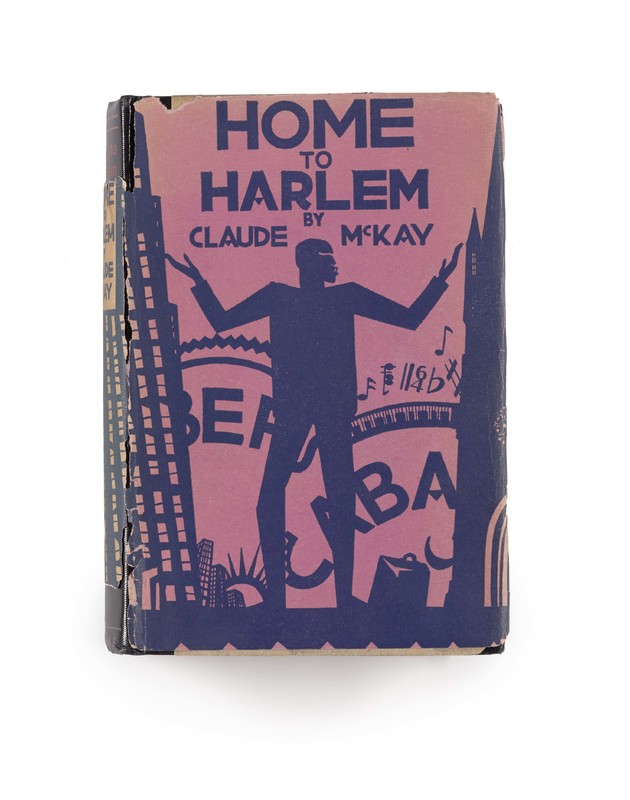 While some leaders objected to portrayals of crude or licentious behavior, stories about Harlem’s freer residents surely sold. Carl Van Vechten’s novel Nigger Heaven, scandalous not only for its title, but also for its plot of sexual promiscuity and murder, sold out its initial printing of 16,000 copies and went through nine printings in its first four months on the market. W. E. B. Du Bois called the novel “a blow in the face” and “an affront to the hospitality of black folk and the intelligence of white.” Van Vechten’s novel was followed by Claude McKay’s Home to Harlem, which Gwendolyn Bennett greeted as a “blue-black symphony.” While many reviewers compared the two novels, based as both were on Harlem night life, Gwendolyn Bennett argued that McKay was an “African chief telling the story of his tribe to the children of unborn men” as compared to Van Vechten’s “student of research giving a cursory account of his findings.” 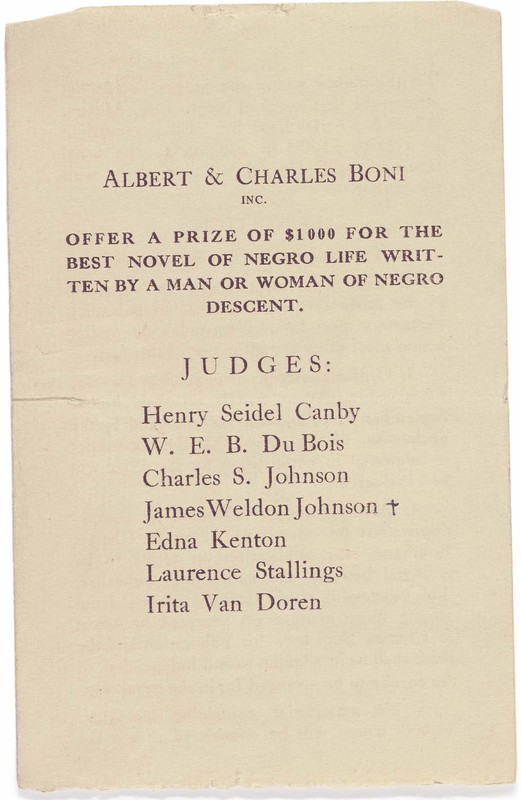 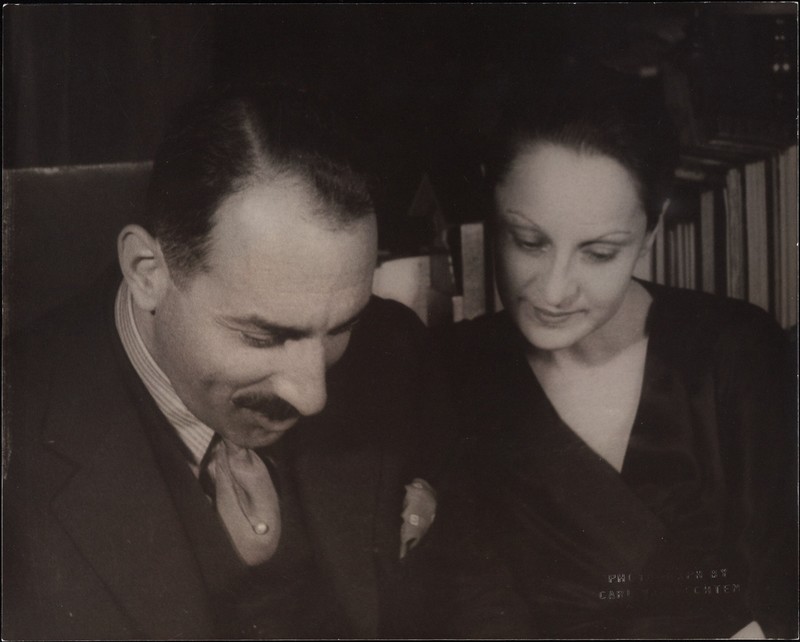 Photograph of Alfred A. Knopf, Sr. and Blanche Knopf, taken by Carl Van Vecthen in 1932.

James Weldon Johnson's Spingarn Medal, awarded by the NAACP in 1925.

A key component of the success of African American writers and artists in the 1920s was the marked increase in economic support for African American art. What Langston Hughes called the “vogue” for the Negro meant that publishers were increasingly interested in Black writers. Foundations like the Harmon and the Rosenwald created fellowships explicitly for Black American artists. Patrons like Joel and Amy Spingarn, Carl Van Vechten, and Charlotte Osgood Mason personally supported individual artists and funded prize competitions and projects. Older, established African Americans at journals like The Crisis and Opportunity prided themselves on providing an outlet for poets, fiction writers, and visual artists.

This support for artists came with strings attached, however. Publishers like Blanche Knopf could be condescending in their attitudes toward writers, whether as a result of their youth (Langston Hughes was just 25 when The Weary Blues was accepted for publication) or their race. Patrons like the eccentric Charlotte Mason could be capricious and demanding, with racist expectations of their protégées. And, of course, the younger generation cohort that created Fire!! rebelled against their older forebears concerning the subject matter and style of proper African American art. Artists’ desire for legitimacy and recognition stood in tension with their knowledge that they might not change the biases of the arbiters of those rewards. 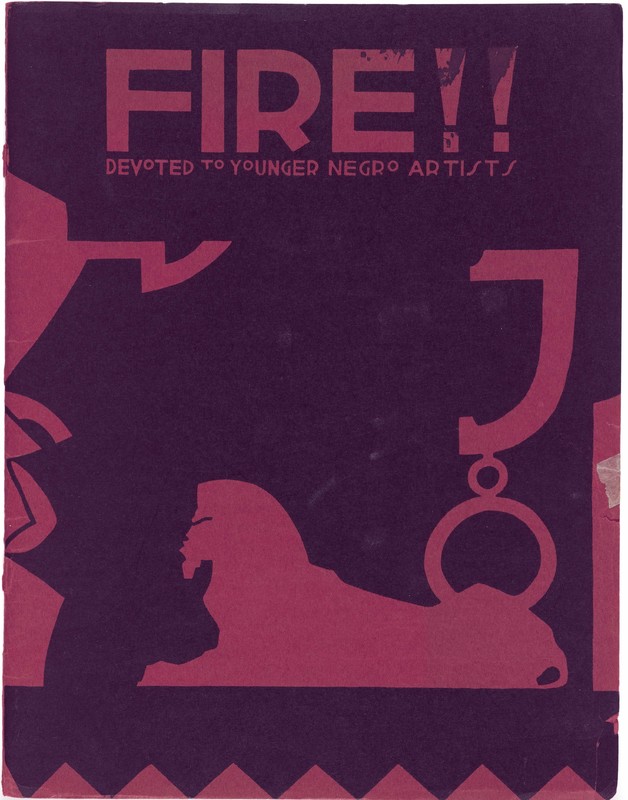 Fire!! A Quarterly for the Younger Negro Artists, 1926. 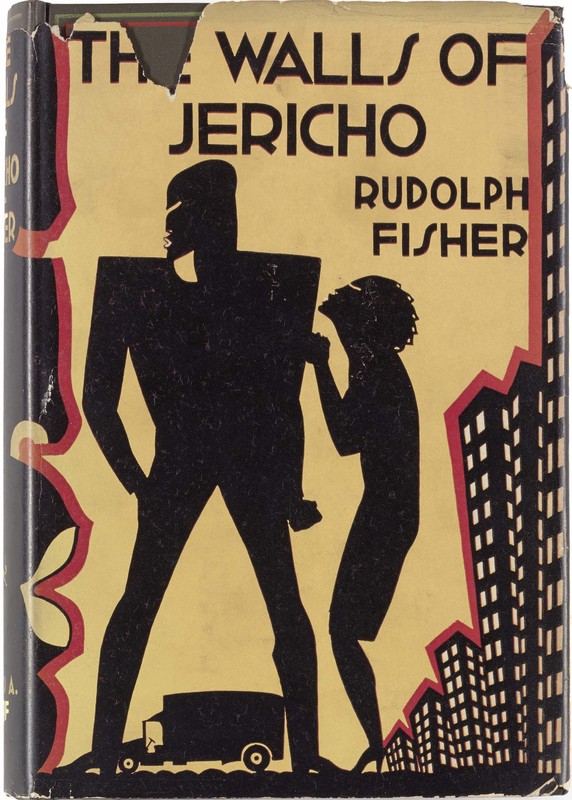 Walls of Jericho, a novel by Rudolph Fisher, 1928. 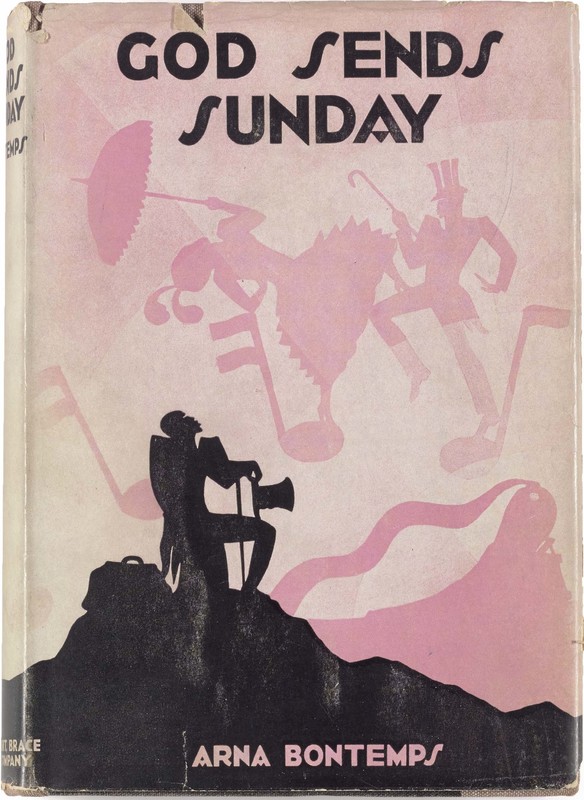 The Harlem Renaissance is noted for its synergy of visual art, music, and literature. Collaborations were nowhere more evident than in the artwork Aaron Douglas and Miguel Covarrubias created for dust jackets and limited editions. Douglas, who left a position teaching high school in Kansas to make art in Harlem at the behest of Opportunity editor Charles S. Johnson, was commissioned by Knopf to provideartwork for James Weldon Johnson’s God’s Trombones. This project was followed by so many more that Douglas’s bright palettes and slit-eyed silhouettes became the hallmark of the era’s visual culture.

The cohort of the “younger generation,” so named by Charles S. Johnson and Alain Locke in the latter’s The New Negro, decided to speak for themselves a year after Locke’s publication. Led by Wallace Thurman, they formed an editorial board for Fire!!, a quarterly “for the younger generation of Negro writers.” The venture only survived one issue, but that single issue contained numerous notable pieces. Thurman later founded a second serial, Harlem: A Forum of Negro Life. Friendships like those of Langston Hughes and Zora Neale Hurston also produced collaborative projects, though Hurston and Hughes’s most ambitious venture, the play Mule Bone, ended in bitter acrimony over rights and authorship.

African American literary salons cropped up in cities from coast to coast. The most prominent of these was Georgia Douglas Johnson’s Saturday Nighters, who met at herhome in Washington, D.C. 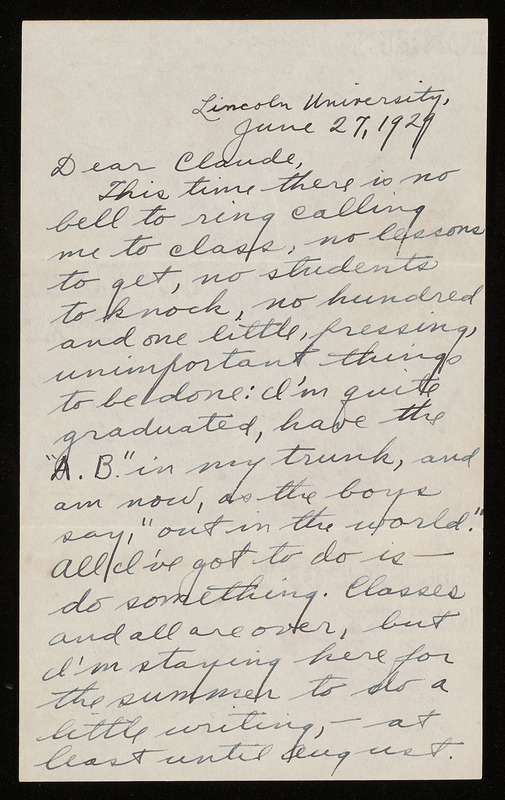 If the Harlem Renaissance is often viewed as resting on a divide between an older and a younger generation, the warm friendship between Claude McKay and Langston Hughes suggests one of big and little brother. McKay, born in 1889, and Hughes, born in 1902, communicated largely through their correspondence after both left New York in the early 1920s, and their letters reveal their mutual admiration, feedback, and support. As McKay writes to Hughes in 1924, “I want to talk to you about your writings. Your stuff seems the most sincere and earnest to me of any that young Afro-America is doing….You ought to pay more attention to technique I think. That blues thing for instance I thought remarkably good but you should have made the whole of it more colloquial. You bring in some literary words which appear strange in such an atmosphere.” Hughes, who often composed on the backs of letters, was inspired by McKay’s encouragement on multiple occasions. For his part, Hughes gushes about McKay’s novel Home to Harlem, writing that it “is the most exciting thing in years. Undoubtedly, it is the finest thing ‘we’ve’ done yet. And I don’t mean limited by the ‘we.’”