Hot Spots: Highlights from the Jazz Collections in the Gilmore Music Library 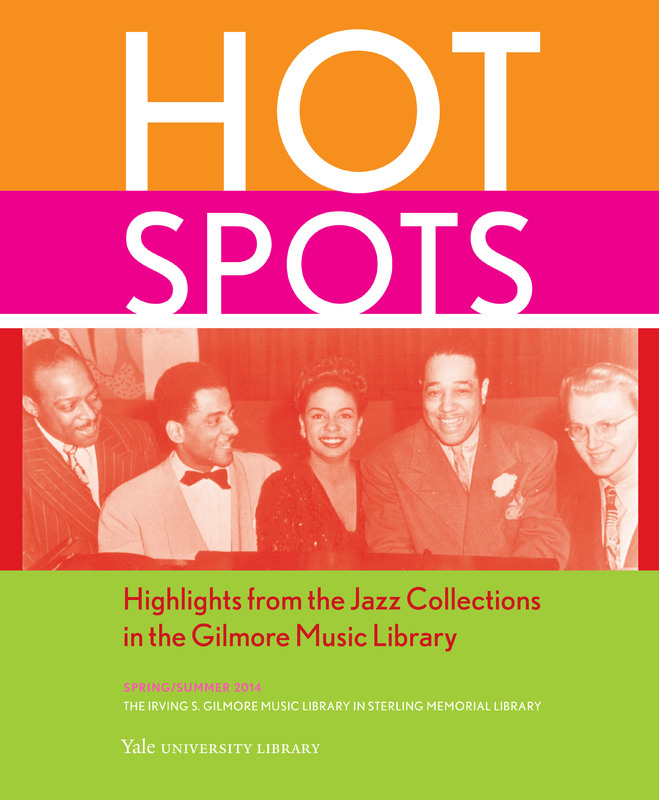 For many years, the word "music" at Yale referred mainly to the European concert tradition, leavened by football songs and a cappella singing groups. Jazz and most other varieties of popular music were kept discreetly in the background. In recent decades, however, Yale has recognized the importance of jazz in a variety of ways. Prof. Willie Ruff won international acclaim for his performances on horn and bass with the late pianist Dwike Mitchell. Beginning in 1972, Ruff organized the Duke Ellington Fellow­ship at Yale, which has brought a long series of jazz luminaries to the campus and to local public schools. In addition to these special events, jazz has become an integral part of the curriculum, with courses taught by Profs. Michael Veal, Brian Kane, and others. The Yale Jazz Ensemble (directed by Thomas Duffy) offers performance opportunities to students.

In a similar fashion, the Yale Music Library was at first slow to discover jazz, but under the leadership of Harold Samuel (who served as head librarian from 1971 to 1994), it became one of the world's foremost repositories of jazz archives, with a special emphasis on music of the swing era. The crown jewel in this collection is the Benny Goodman Papers: 129 boxes of big band arrangements, correspondence, photo­graphs, and other materials from the "King of Swing" himself. Yale also holds the papers of many other distinguished jazz musicians, such as J. Rosamond Johnson, Ted Lewis, Red Norvo, Mildred Bailey, Eddie Sauter, Mel Powell, Slam Stewart, Marian McPartland, and John Mehegan. The Library's holdings are further enhanced by the papers of the critics Stanley Dance and Helen Oakley Dance, the record producer and legendary talent scout John Hammond, and the recording engineer and photographer Fred Plaut. The photographs displayed here are from the Dance Papers, the Plaut Papers, and the Goodman Papers. The Library also holds notable individual manu­scripts by Duke Ellington, Fats Waller, Artie Shaw, and Glenn Miller.

This exhibit, which has been prepared to coincide with Jazz Lives: The Photographs of Lee Friedlander and Milt Hinton at the Yale University Art Gallery and Jazz and the Book Arts at the Haas Arts Library, offers a small sample of the jazz treasures to be found in the Gilmore Music Library. Portions of this exhibit are based on a 2006 exhibit by Kendall Crilly and Richard Boursy: A Celebration of Jazz at Yale.