The Kings at Yale 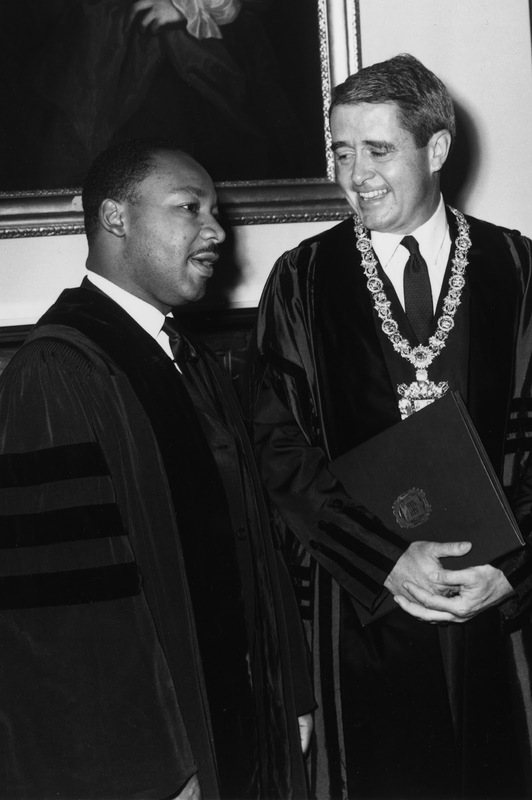 The visits to Yale by Martin Luther King Jr (1959 and 1964) and Coretta Scott King (1969) are documented in Manuscripts and Archives in the Yale Library. King was invited to Yale in 1959 by an undergraduate lecture committee and spoke on "The Future of Integration." He returned to Yale in 1964 to receive an honorary degree, along with Averell Harriman, Philip Jessup, Sargent Shriver Jr., Alfred Lunt, and Lynn Fontanne. King was released on bail from the St. Augustine, Florida, jail just two days before receiving the degree from Yale. He had been arrested for ordering food in a whites-only motel. King's honorary degree caused considerable reaction, both pro and con, around the country.

The citation for King’s honorary Doctor of Laws degree read:

As your eloquence has kindled the nation’s sense of outrage, so your steadfast refusal to countenance violence in resistance to injustice has heightened our sense of national shame. When outrage and shame together shall one day have vindicated the promise of legal, social, and economic opportunity for all citizens, the gratitude of peoples everywhere and of generations of Americans yet unborn will echo our admiration as we proudly confer upon you the degree of Doctor of Laws. 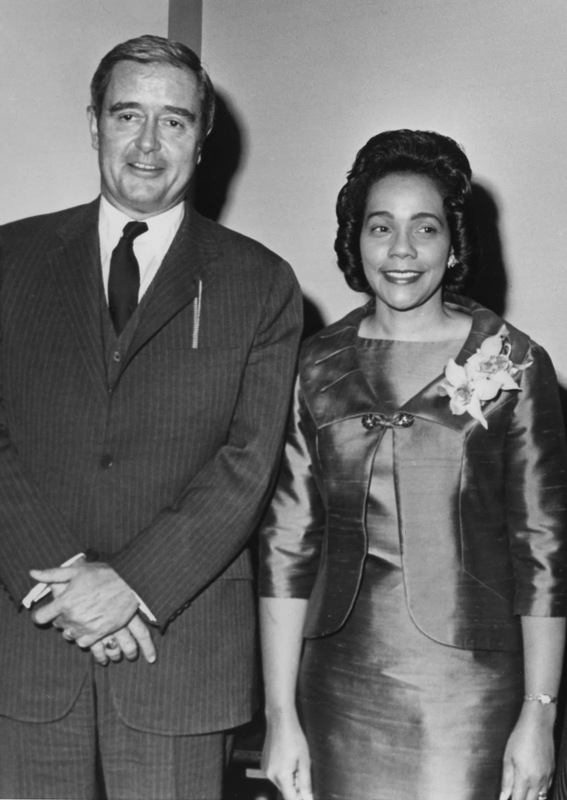 Coretta Scott King was named the first Frances Blanshard Fellow at Yale in 1969, the year after her husband’s assassination. While on campus in February of that year she met with women graduate students and spoke to a standing room only crowd in Woolsey Hall on the importance of campus unrest in addressing social injustices. In her speech, “The Role of the Academic Community in Today’s Turbulent World,” Mrs. King reminded her audience that “a new order which does not understand and appreciate the past . . . is only going to repeat those same errors.”

Read more about connections between the Kings and Yale in Chief Research Archivist Judith Schiff's 2004 article from the Yale Alumni Magazine.

The materials in this exhibit are reproductions of records from the Office of the President, Kingman Brewster Jr (RU 11); Office of Public Affairs and Communications, Yale Events and Activities Photographs (RU 690); Buildings and Grounds Photographs (RU 703); the Helen Hadley Hall Fellowship Program (RU 9); and Yale News.

This exhibit was produced by Sarah Davis, MLIS, Library Exhibits Technician, for Yale University Library’s observance of the birthday of Martin Luther King Jr, with assistance from Bill Landis, Trip Kirkpatrick, Colin McCaffrey, Kristen McDonald, and Jessica Quagliaroli. Christine Weideman and Patricia Carey provided invaluable reviews of the exhibit. It is adapted from a physical exhibit curated by William Massa and Christine Weideman and designed by Mark Saba.