From Stoeckel to Hindemith: The Early Years of the Yale School of Music 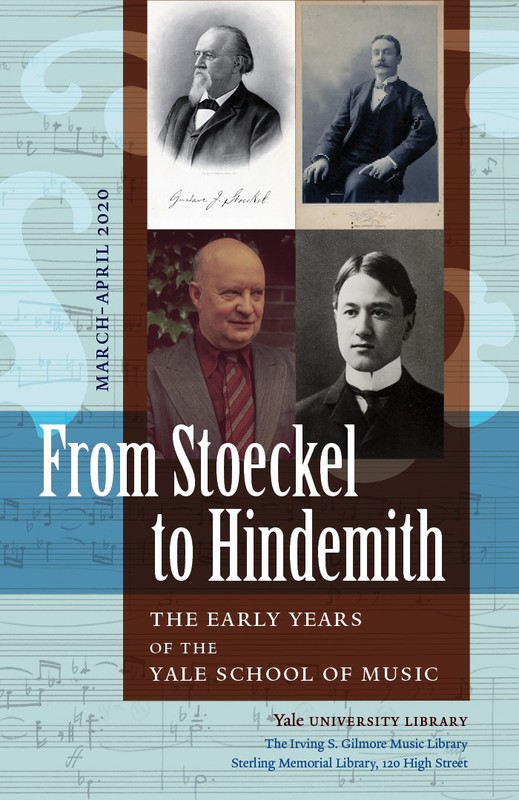 "From Stoeckel to Hindemith" poster

In 2019-2020, the Yale School of Music celebrates its 125th anniversary. The Music Library and the School of Music have been partners from the beginning, so we are delighted to take this opportunity to highlight some major figures in the early history of the YSM: Gustave Stoeckel, Horatio Parker, Paul Hindemith, and Charles Ives.

Gustave Stoeckel (1819-1907) was the first music professor at Yale. Born in Germany, he came to the United States after the unsuccessful Revolution of 1848, and settled in New Haven. In 1855 he was appointed Instructor of Vocal Art, Organist, and Chapelmaster at Yale, and in 1890 he became Battell Professor of Music. He composed numerous works, he conducted the Yale Glee Club and other ensembles, and he strove to establish music’s rightful place in the Yale curriculum, despite the opposition of those who regarded it as a mere avocation, and not a fit subject for study in a university.

In 1894, the first Bachelor of Music degrees were awarded, the music program was formally separated from Yale College, and Horatio Parker and Samuel Sanford were appointed to lead it. In the long and complex evolution of music at Yale, these milestones are traditionally regarded as the founding of the School of Music.

Horatio Parker (1863-1919) was one of the few American composers of his generation to develop an international reputation, especially for his oratorio Hora Novissima. In 1904, after he had already been at the School of Music for a decade, he was named the School’s first Dean, a position he retained until his death. Parker was also the founding conductor of the New Haven Symphony Orchestra, which was closely associated with Yale (in an era when today’s student orchestras—the Yale Philharmonia and the Yale Symphony Orchestra—did not yet exist).

Like Stoeckel, Paul Hindemith (1895-1963) left his native Germany because of an intolerable political situation—in his case, the Nazi regime. He came to Yale in 1940; initially he was a visiting professor, but he was quickly appointed to a permanent position. Hindemith was already one of the world’s leading composers when he arrived at Yale. He helped establish the School of Music as one of the world’s leading conservatories, and attracted numerous brilliant young musicians to Yale. Hindemith was an important theorist as well as a composer, and an expert not only on contemporary music, but also early music; he founded and directed the Yale Collegium Musicum, which performed Medieval and Renaissance music at a time when they were rarely heard. Hindemith became an American citizen in 1946, but in 1953 he left Yale and moved to Switzerland, where he spent his final decade.

Unlike Stoeckel, Parker, and Hindemith, Charles Ives (1874-1954) was never a faculty member; he was an undergraduate (Class of 1898), and he went on to have a very successful career in the insurance industry, while continuing to compose in his spare time. Parker was his principal teacher at Yale, and he benefited greatly from the technique he acquired under Parker’s guidance, even as he developed a musical style that was very different from Parker’s. For much of his career, Ives worked in obscurity, but by the time of his death, he was hailed by many as the greatest American composer.

Our exhibit features music manuscripts, photographs, and other documents that bring to life a crucial period in the illustrious history of music at Yale.