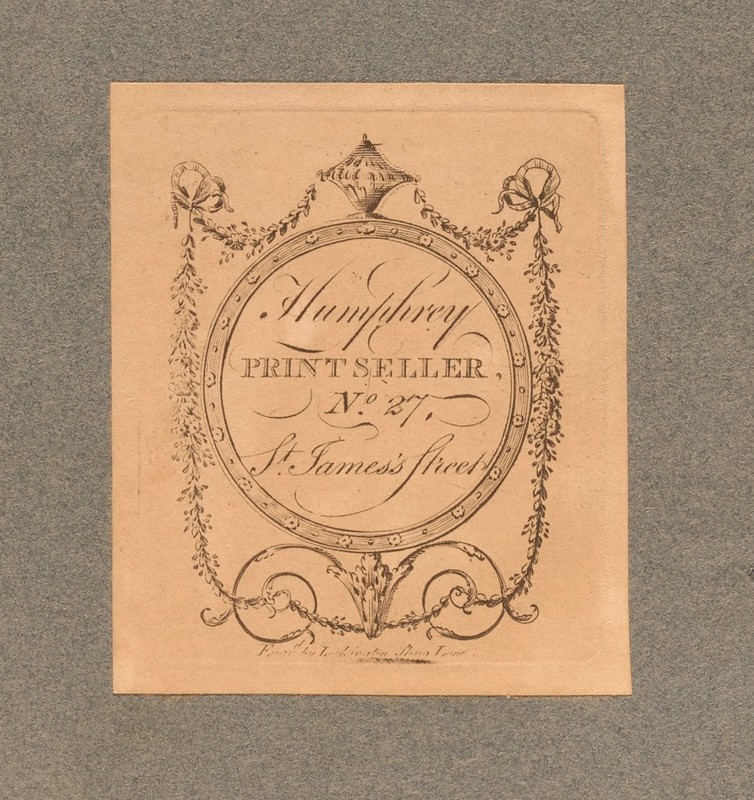 Humphrey Shop Album and Royal Divorce in the Media

The Lewis Walpole’s Library’s Humphrey shop album is rich in stories - not just the stories of the historical events of a scandalous royal divorce, but also stories about the role of visual media in early nineteenth-century London as historical witness and as arbiter of public opinion.

The Humphrey Album was created by prominent London satiric print publisher George Humphrey (1773?-1831?), the nephew and successor to Hannah Humphrey, who published the graphic satires by James Gillray for most of his career. George Humphrey took over his aunt’s successful print business following her death at the same fashionable West End address at 27 St. James’s Street. Just as she had done, he specialized in satires of current political events and social gossip. George Humphrey’s trade card is pasted inside the original front board.

The album is a rare surviving example of a blue-paper folio that a print seller would present for clients visiting the shop to browse prints available for purchase either from existing inventory or to be printed to order from copper plates in the publisher’s stock. Most such albums are broken up and sold as individual prints by later dealers. Remaining complete, Humphrey’s large folio album (approximately 660 x 500 mm) includes 131 early nineteenth-century graphic satires of which 118 represent prints were not previously represented in the Lewis Walpole Library collection. All are etchings and engravings with original, fresh publisher’s hand color by Theodore Lane (54), George Cruikshank (17), Robert Cruikshank (14), William Heath (6), J.L. Marks (6) and Charles Williams (5). Although offered for sale by George Humphrey, the album also includes prints by competitors, S.W. Fores, William Benbow, J.L Marks and John Fairburn. Virtually all the prints are satires dedicated entirely to the events surrounding the marriage of George IV and Queen Caroline, including her alleged affair with Count Bergami at the center of “A Bill of Pains and Penalties” brought before Parliament whereby George IV sought to divorce Queen Caroline and deny her coronation. Several sympathetic images of the Queen are also included. The album spans roughly one year of prints published from June 1820, when the Queen returned to London from residency in Europe during an estrangement from George IV, through May 1821. She died shortly thereafter on August 7, 1821. In addition to Queen Caroline, King George, and Bergami, the collection features many major figures involved in the scandal: Sir Matthew Wood who advised the Queen and Castlereagh, Sidmouth, Liverpool, Brougham, Wellington, Denman, among others.

Queen Caroline assumed multiple personalities according to the perspective of public opinion. Advocates of divergent agendas crafter varying narrative of the affair. For example, two seemingly identical images printed from the same copper plate etched by Theodore Lane and published by George Humphrey have different titles that acknowledge different facets of Caroline’s public image and direct the viewer to opposing interpretations. Is she Bergami’s Darling (the adulterous Queen) or alternatively John Bull’s Darling the queen of the reform movement? The royal domestic quarrel “assumed a symbolic weight far in excess of its manifest political or constitutional importance.” These are the words of Thomas Laqueur whose 1982 foundational article, “The Queen Caroline Affair: Politics as Art in the Reign of George IV” set out to account for a disproportional infusion of significance in the queen’s affairs … “of how a divorce action became a great radical as well as a women’s cause.” A full-blown partisan debate surrounded the trial. Scandalous details on both sides inundated the media and contemporary discussion. 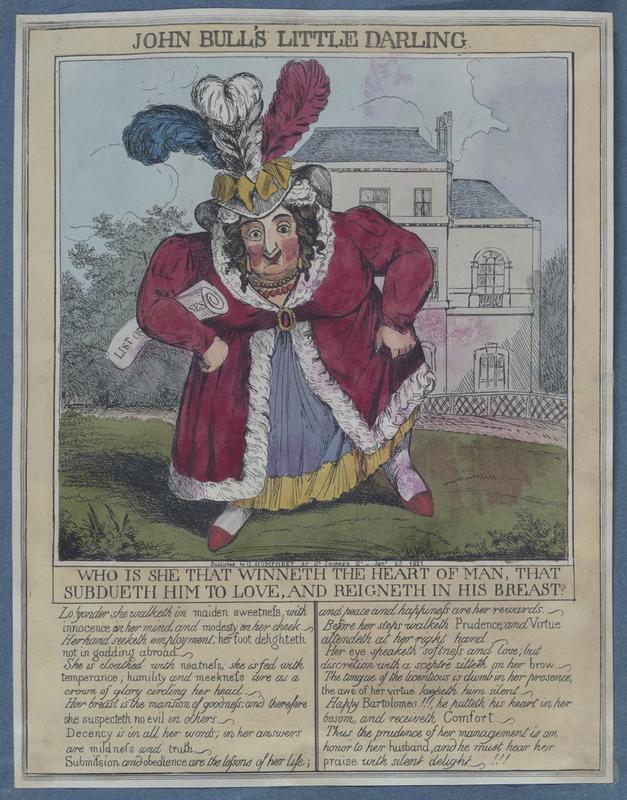 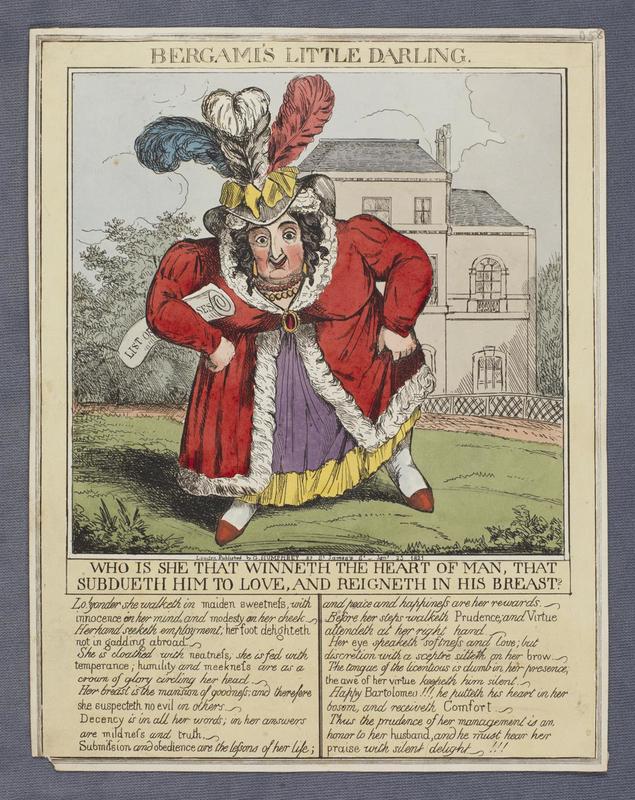 Each print captures aspects of news, gossip, political debate and parliamentary proceedings around the Queen Caroline Affair which embroiled and bitterly divided the nation. King George IV’s attemot to divorce the Queen gave his political opponents their opportunity to undermine this authority and the reform movement accordingly adopted Caroline as their figurehead. Both Queen Caroline and her estranged husband George IV played starring roles in the prints of this era. Those of Queen Caroline were often cruel satires, steeped misogyny that were part of a wider debate over the women’s roles in English society. But George IV did not escape the satirists’ venom.

Many of the satires from the Humphrey shop album on the Queen Caroline affair serve in at least two instances as illustrations to the printed text of The Attorney-General’s Charges against the late Queen: Brought forward in the House of Peers on Saturday, August 19th, 1829. In both cases, the ridiculing satires support the charges against the queen. The two are however unique. An album at Princeton’s Firestone library includes nicely hand-colored prints printed one per page. The prints in a variant album at the University of Colorado, Boulder on the other hand remain uncolored with more than one plate printed on a page as they fit.* This album was apparently produced under commission by George IV to circulate the slanderous prints thereby damaging the reputation of his estranged wife.

Over the last few years, the album has undergone significant treatment by library conservator Laura O’Brien Miller including extensive cleaning and providing a new custom binding so that pages can be turned, and scholars and students can browse the volume as contemporary customers would have done. The album, together with much additional material in the library’s collections, is available for scholars and students to explore. Researchers can visit the library by appointment or browse the content virtually. Library assistant Scott Poglitsch has fully cataloged each individual print in Orbis where records include digital images. Alternatively, one can browse the full album.