Beginnings: The American School for the Deaf

Schools have long been key sites for the development of Deaf culture, so the establishment of the first permanent school for deaf children in the United States is widely celebrated. The popular account of its founding states that in 1814, the young reverend Thomas Hopkins Gallaudet (BA Yale 1805, MA Yale 1808) wondered why the daughter of his Hartford neighbor did not laugh or play with his own younger siblings. Nine-year-old Alice Cogswell was deaf, and her family and friends struggled to communicate with her. Gallaudet traced the letters H-A-T into the dirt with a stick and pointed to his hat. Alice immediately understood, and Gallaudet realized his life’s calling. After observing different methods of instruction and communication on a European voyage supported by Alice’s father, Dr. Mason Fitch Cogswell (BA Yale 1780), Gallaudet concluded that the French method of sign language was most effective. He recruited Deaf Frenchman Laurent Clerc to help establish the Connecticut Asylum for the Education and Instruction of Deaf and Dumb Persons, which opened in Hartford on April 15, 1817. Alice Cogswell was its first registered student. Now called the American School for the Deaf, this historic institution will celebrate its bicentennial in 2017. 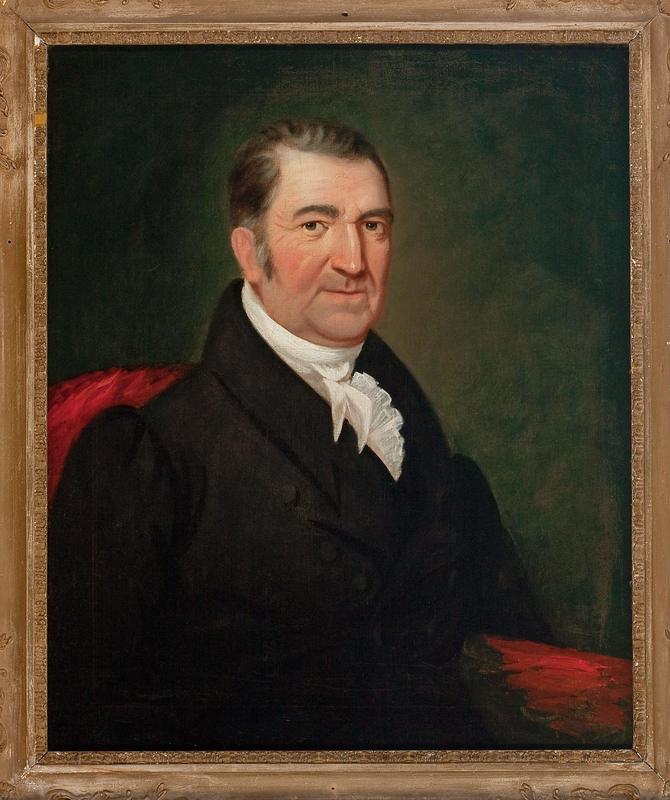 Mason Fitch Cogswell, 1780, valedictorian of Yale College, was a Hartford physician who performed the first successful cataract removal in the United States. His youngest daughter, Alice, was deafened by illness at age two. The Cogswells lived next door to the prominent Gallaudet family: Peter Wallace Gallaudet, Thomas Hopkins Gallaudet’s father, had previously served as personal secretary to President Washington. 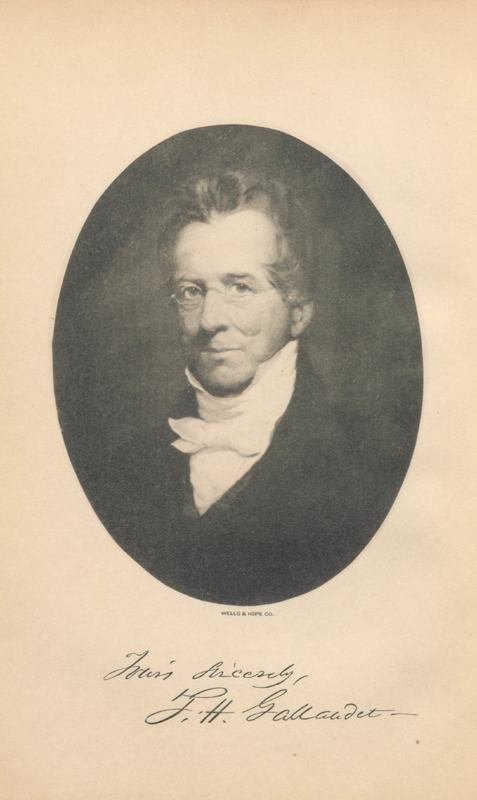 Gallaudet is shown here wearing glasses; his name in American Sign Language is the same as the sign for GLASSES.

Thomas Hopkins Gallaudet earned his bachelor’s and master’s degrees at Yale before graduating from Andover Theological Seminary in 1814. Following his serendipitous encounter with Alice Cogswell, Gallaudet embarked on a year-long tour of European deaf schools. After a frustrating visit to the secretive Braidwood Academy in England, which taught speech and speechreading, he attended a demonstration of the French manual method—that is, sign language—in London. The National Institute of the Deaf in Paris invited Gallaudet to study French Sign Language and deaf instruction. Impressed with their curriculum, Gallaudet persuaded the esteemed instructor Laurent Clerc, a former student of the Institute, to  teach deaf children in America. 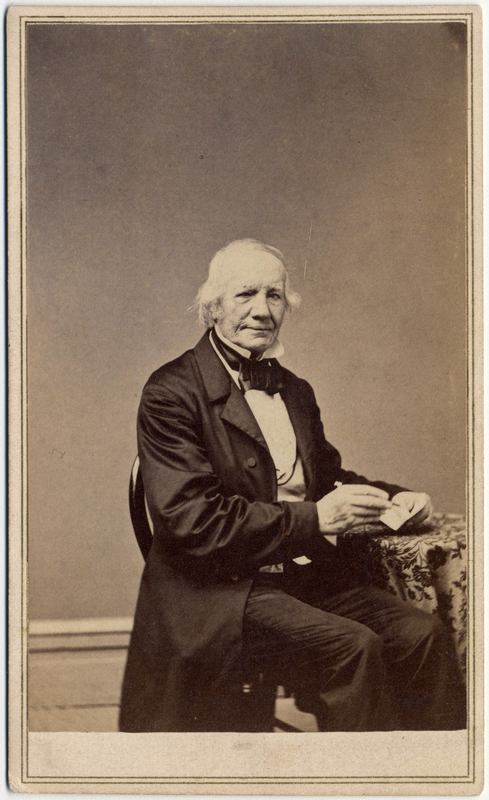 Laurent Clerc was born in La Balme, France in 1785. As he later recounted in his autobiography, he fell into a fire as a toddler, which left him deafened and scarred his cheek. His name is signed by brushing the index and middle fingers twice down the cheek. Clerc was an exceptional student and later an internationally known instructor at the National Institute of the Deaf in Paris. He left his students only reluctantly in 1816, when Gallaudet persuaded him to come help American children. During the fifty-two-day voyage across the Atlantic, Clerc and Gallaudet exchanged lessons in French Sign Language and English, and Clerc kept a diary to practice his English. 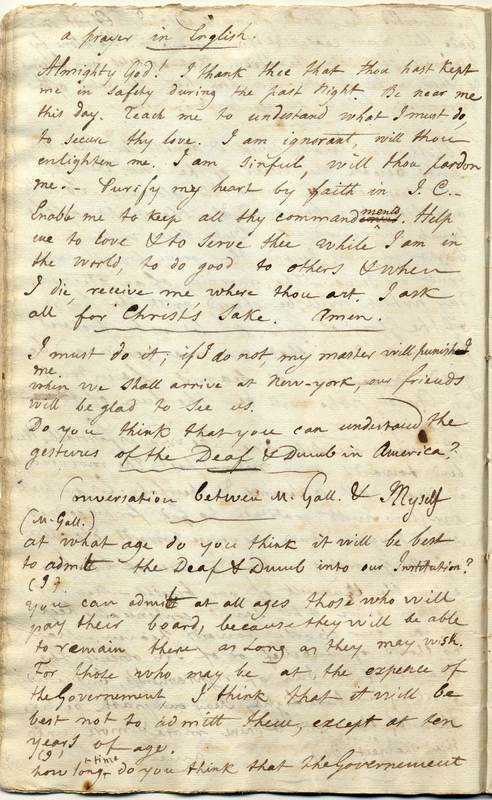 Manuscript pages from Laurent Clerc's diary of trip to America, 1816 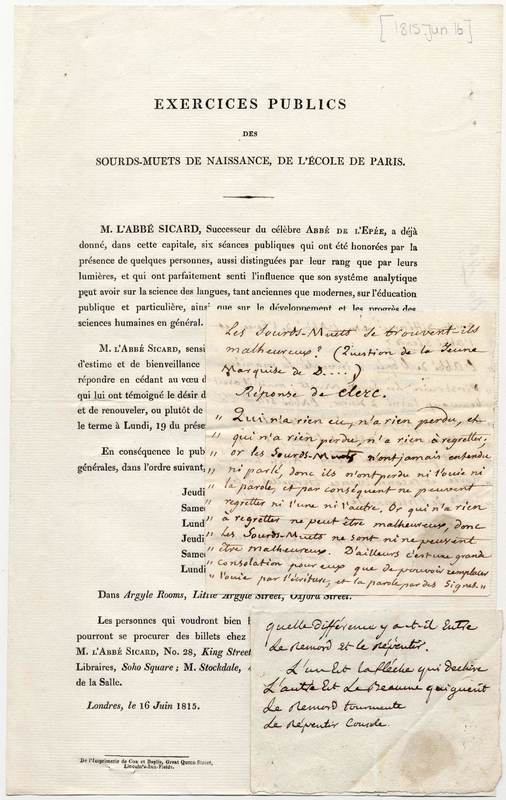 While Gallaudet was visiting London’s Braidwood Academy in 1815, the Abbé Sicard, principal of the National Institute of the Deaf in Paris, was also in London with Clerc and another Deaf teacher, Jean Massieu, demonstrating the French method of deaf instruction to paying audiences. Sicard, who was hearing, solicited questions from the spectators and interpreted into French Sign Language for Clerc and Massieu. The Deaf men then wrote eloquent responses in French, demonstrating their intellect and linguistic proficiency.

Replying to a question about whether deaf people are unhappy, Clerc wrote,