No universal method of deaf education exists. One communication strategy—the oral method—relies on spoken language and speechreading (also known as lipreading, though it involves more than just the lips). Oralism requires intensive practice and is most successful for individuals who learned to speak before becoming deaf. An alternative to oralism is the manual method, which uses sign language. Manualism facilitates natural and efficient communication, but few people outside Deaf communities know American Sign Language (ASL), which can limit interaction.

Despite Gallaudet and Clerc’s preference for manualism, in the late nineteenth century, oralism gained currency in the United States and Europe. By the early twentieth century, ASL was banned in a majority of deaf schools across the United States. Today, however, many schools, including the American School for the Deaf in Hartford, subscribe to a Total Communication Philosophy, which encourages all forms of communication, including speech, speechreading, English, and ASL. 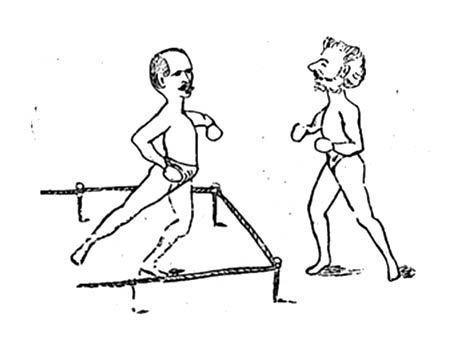 This cartoon of Alexander Graham Bell and Thomas Hopkins Gallaudet’s son, Edward Miner Gallaudet, satirizes their longstanding and heated debate over deaf instruction. Bell championed the oral method and led the fight against manualism, while Gallaudet defended the use of sign language both inside and outside the classroom. 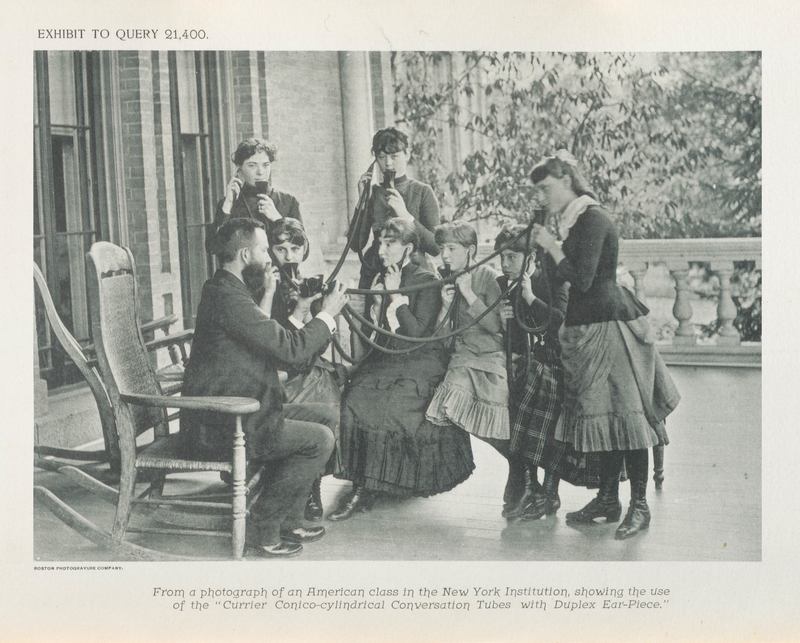 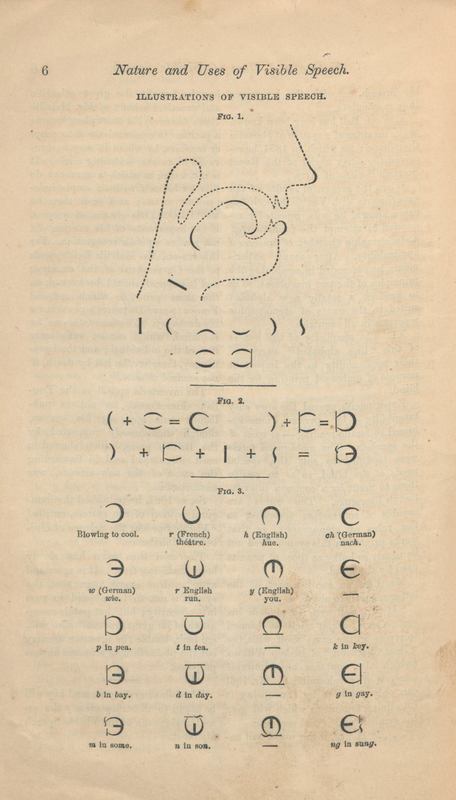 Melville Bell's On the Nature and Uses of Visible Speech

Melville Bell developed a written system of sounds called Visible Speech. To demonstrate its utility, he had his young sons wait in a separate room while audience members suggested a series of complex sounds, including phrases in foreign languages, nonsensical utterances, and non-speech sounds such as kissing and laughter. When summoned, the Bell children read their father’s notations and faithfully replicated the sounds. His work on speech improvement had a lasting impact on his son Alexander Graham Bell, who believed deaf people could learn to speak. 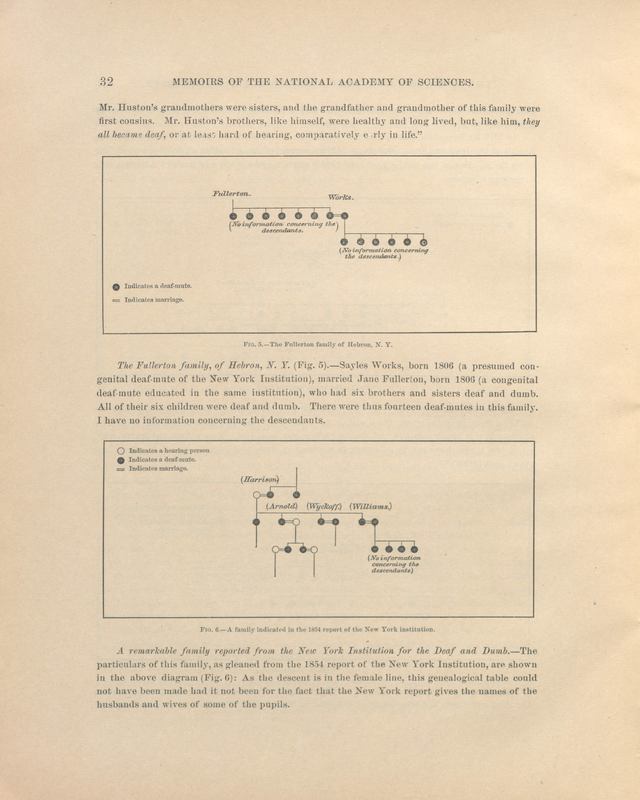 A. G. Bell, Memoir Upon the Formation of a Deaf Variety of the Human Race

Bell warned that sign language jeopardized deaf people’s potential to integrate fully into mainstream hearing society. An avid eugenicist, he presented his paper “Upon the Formation of a Deaf Variety of the Human Race” to the National Academy of Sciences in New Haven in 1883. This work suggested that deaf couples bore similarly “afflicted” children at higher rates than hearing parents, provoking other eugenicists to condemn intermarriage among deaf people. Bell, who married a deaf woman named Mabel Hubbard, believed deafness could be reduced or eradicated through “superior” breeding with hearing people.

This pedigree chart depicts a deaf marriage resulting in deaf offspring, but modern research shows this to be rare. While some causes of deafness are inheritable, ninety percent of children with two deaf parents are hearing, and ninety percent of deaf people have two hearing parents. 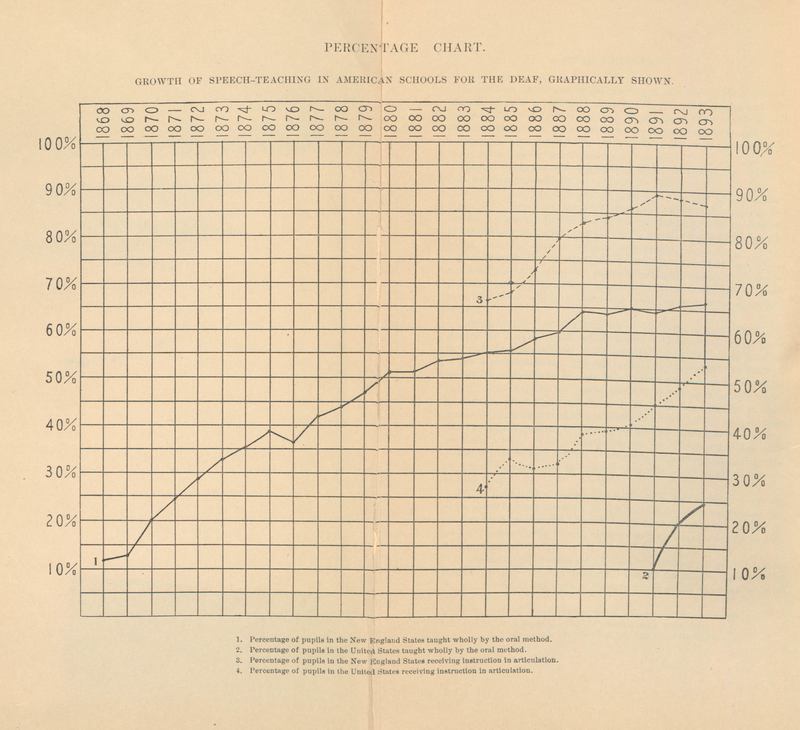 Growth of the Oral Method of Instructing the Deaf

Thomas Hopkins Gallaudet’s youngest son, Edward, taught at his father’s school in Hartford for several years before establishing a new school in Washington, D.C. Like his father, Edward believed American Sign Language was the most natural language for Deaf Americans, but he also saw value in speech training for some deaf students. He promoted a combined method of oralism and manualism and fiercely debated Bell’s oralist-only approach. However, on September 11, 1880, an international congress of educators of the deaf, meeting in Milan, Italy, voted 160-4 to declare oralism the superior method of instruction. As this chart shows, articulation training rose  in the U.S. following the Milan Conference.

Considering the incontestable superiority of speech over signs in restoring the deaf-mute to society, and in giving him a more perfect knowledge of language,

That the Oral method ought to be preferred to that of signs for the education and instruction of the deaf and dumb.