Annie Burr Lewis grew up with family connections to Yale University through male alumni and enthusiastic female devotees, but her 1928 marriage to W.S. “Lefty” Lewis, Yale Class of 1918, cemented those ties. Scholarship on the British world of the long eighteenth century was a focus of the Lewises’ life together and, by extension, of her support for the university. In addition, her connections to the Mount Vernon Ladies’ Association and her interest in nursing also influenced her individual contributions to Yale.

In her lifetime and by bequest Annie Burr provided funds to support a range of Yale programs and initiatives, most notably the production and publication of the Yale Edition of Horace Walpole’s Correspondence (Yale University Press, 1937-1983); ongoing support for the Lewis Walpole Library in Farmington; support students in the School of Nursing and in the Graduate School of Arts and Sciences; and funding for the Yale University Press. The letter from Carlos “Tot” Stoddard Jr., of the Office of University Development, dated January 5, 1956 reflects Annie Burr's modest insistence that her gifts be treated without fanfare. 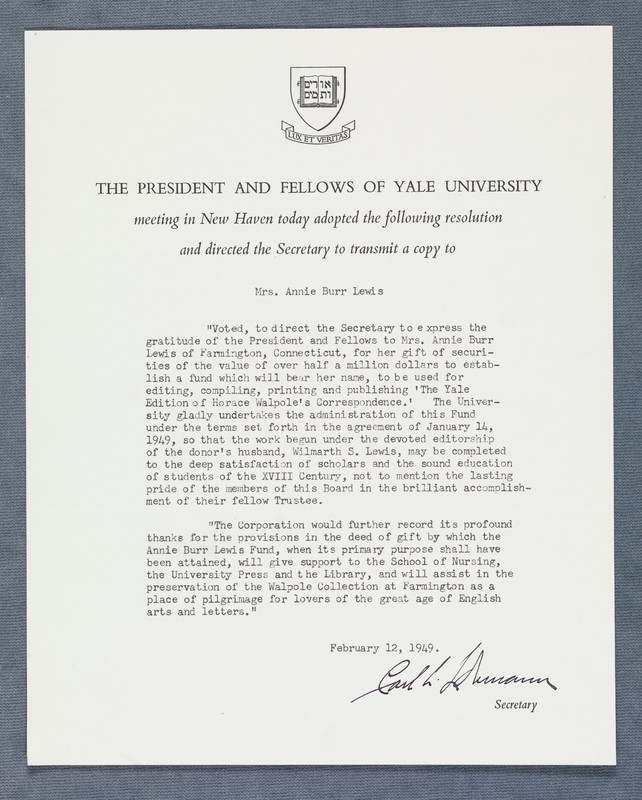 Resolution in gratitude for the Annie Burr Lewis Fund 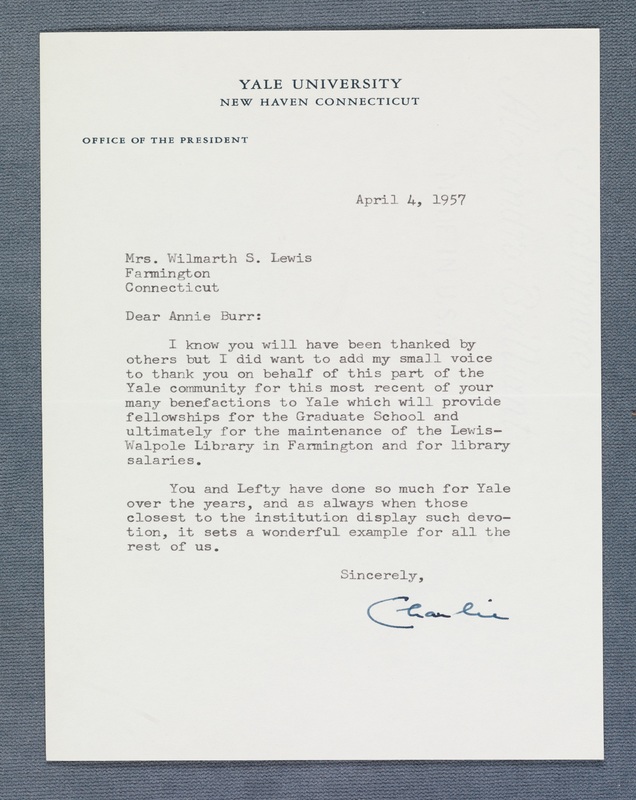 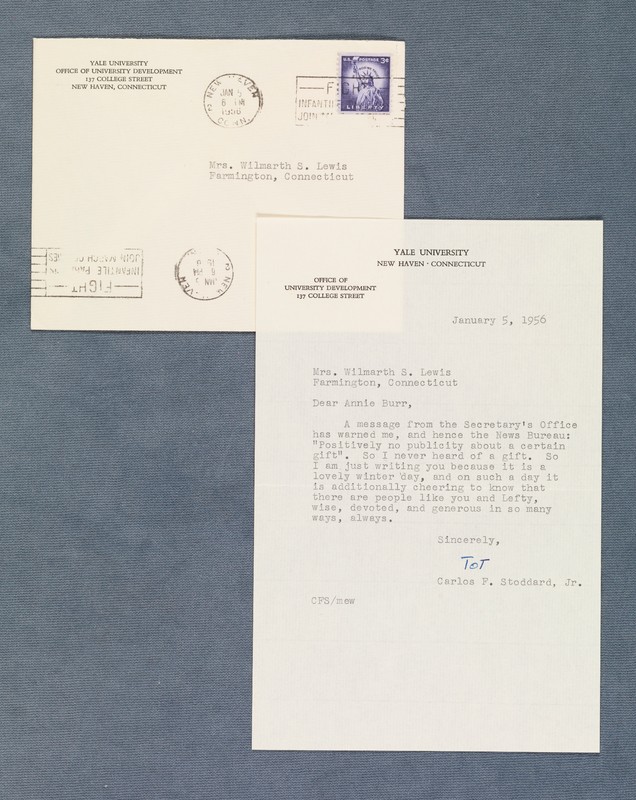 Annie Burr made a gift of this portrait of George Washington, by the noted American painter Rembrandt Peale, to the Yale University Art Gallery in 1953, and it was gratefully received by the recently appointed director, Lamont Moore. The portrait hung for many years over the mantel in the Old Library in the eighteenth-century Cowles House portion of the Lewises’ home in Farmington, as shown in this photo. Also in the Old Library were a number of items, some still on view, depicting either George Washington or his home at Mount Vernon, reflecting Annie Burr Lewis’s position as Vice Regent for Connecticut for the Mount Vernon Ladies’ association. Although now the property of the Yale University Art Gallery, the painting remains in Farmington. 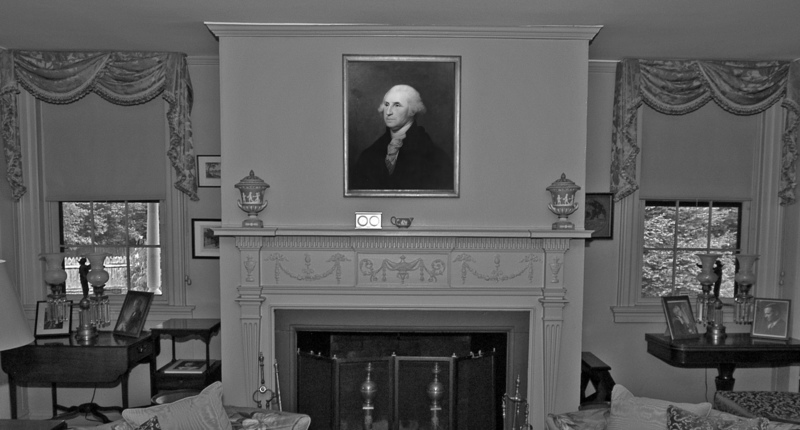 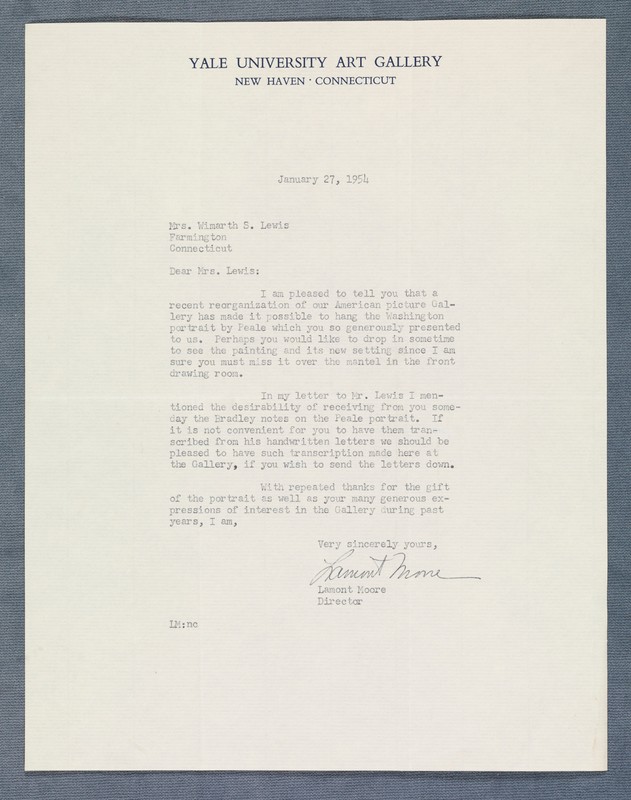 Interest in nursing is a thread that ran through Annie Burr Lewis’s life. Elsewhere in this exhibition her service to the American Red Cross is explored. That interest, her connections to Yale, and her proximity to the campus, not to mention her gender, made her a welcome addition to the university’s Committee on Medical Affairs subcommittee on the School of Nursing, on which Reginald Coombe tapped her to serve. At the time, both the School of Nursing and the School of Medicine were losing money, and uncertainties about their future were affecting morale among the faculty and students. Annie Burr made a small but welcome gesture to improve the students’ living conditions with the gift of a Victrola radio. As a result of the subcommittee’s work and actions subsequently taken on the recommendation of the Medical Affairs committee, Yale committed to strengthening the school’s academic program, and the School of Nursing was positioned to thrive. 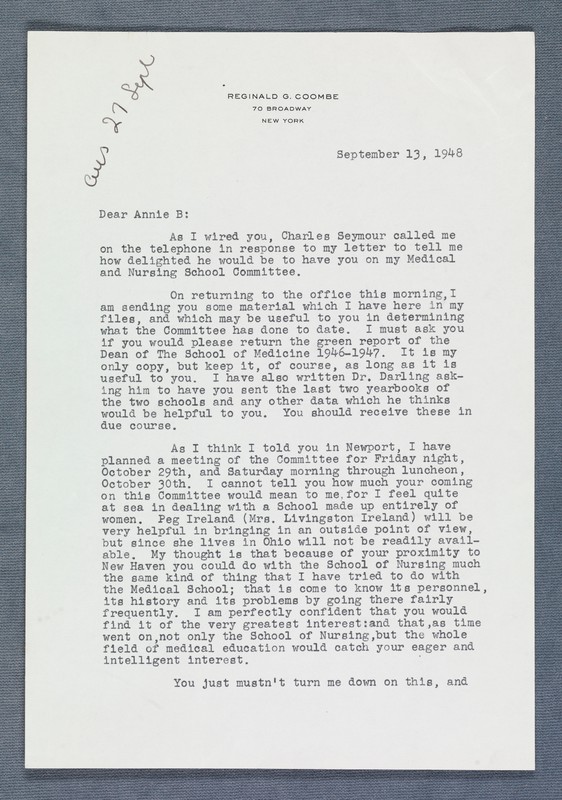 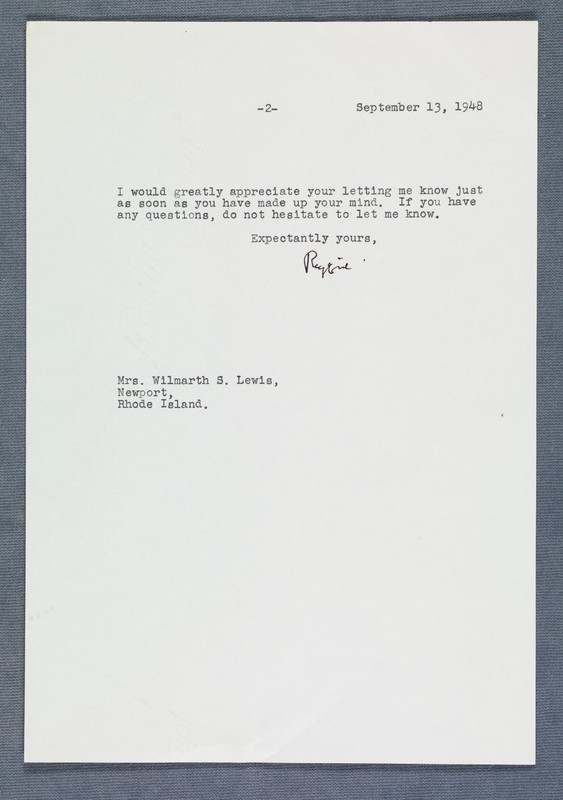 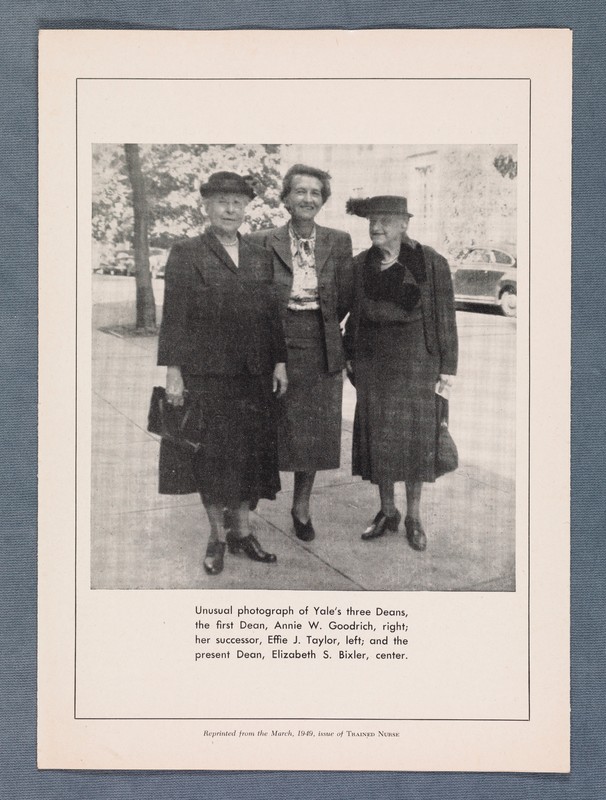 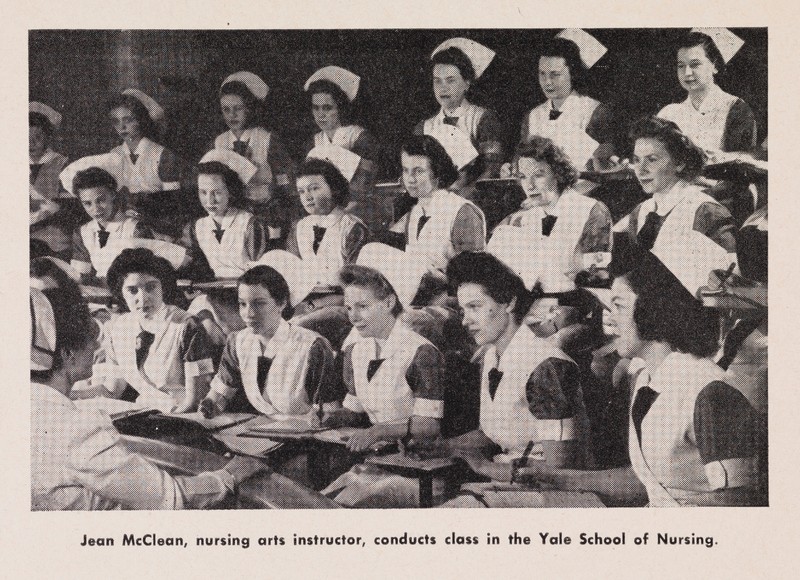 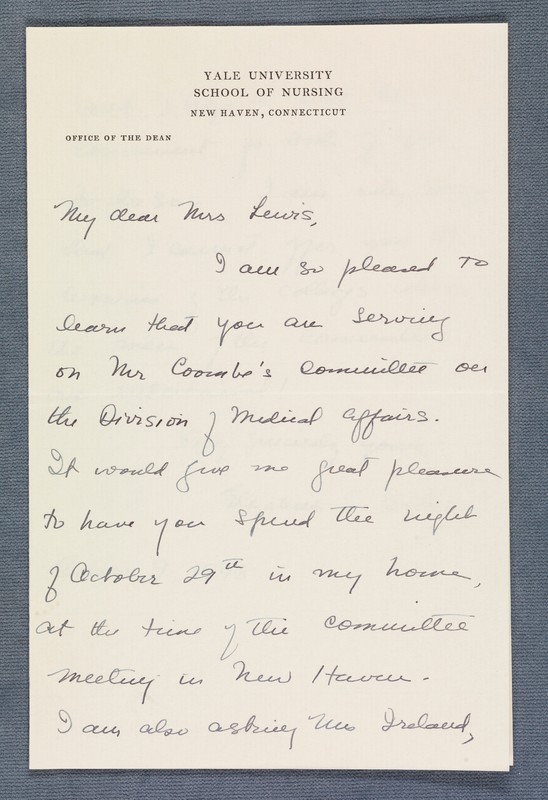 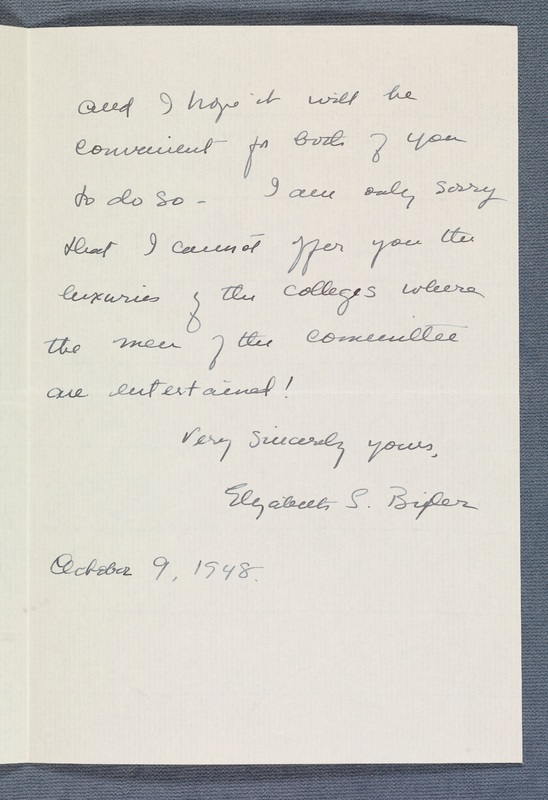 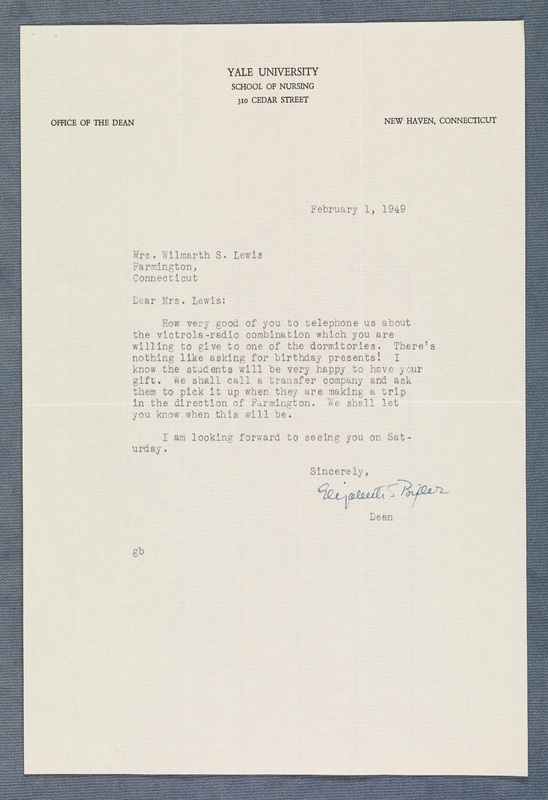 Damrosch, Leo
The Club: Johnson, Boswell, and the Friends Who Shaped an Age, 2019
*One of the 10 Best Books of 2019 by the New York Times Book Review

Eltis, David
Atlas of the Transatlantic Slave Trade, 2015
*PROSE Award for Excellence in Single Volume Reference/Humanities and Social Sciences category, given by the Association of American Publishers

Taylor, David
The Politics of Parody: A Literary History of Caricature, 1760–1830, 2018
*Outstanding Academic Title for 2019 by Choice Magazine