From Blues to the Emperor Jones: African American Performing Arts 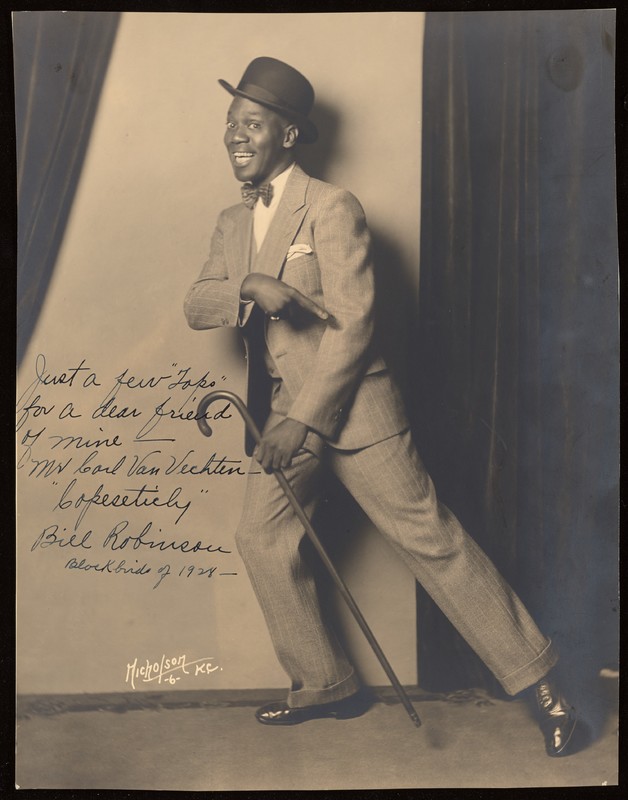 The Harlem Renaissance marked an explosion of African American performing arts into mainstream American culture. From blues and jazz music to dances like the Charleston and the Lindy Hop, from musical theater to serious drama, commenters noted that suddenly African American performers seemed to be everywhere one looked. Langston Hughes would later write disdainfully of the persistence of blackface performance—Ethel Barrymore appeared on Broadway as the title character in Scarlet Sister Mary in 1930. But Broadway stages were also newly open to African American performers, with plays like Porgy (1927) and Run Little Chillun (1930) employing enormous casts.

African American participation in the performing arts was perhaps even more fraught with racialized power dynamics than the publishing or art worlds, but performers like Bill Robinson, Josephine Baker, and Paul Robeson were still often able to dictate the terms of their engagements, refusing to perform for segregated audiences. From the chorus line that was reinvented by Shuffle Along to the influence of blues and jazz on American popular music, African American performance of the Harlem Renaissance period had perhaps the most lasting impact. 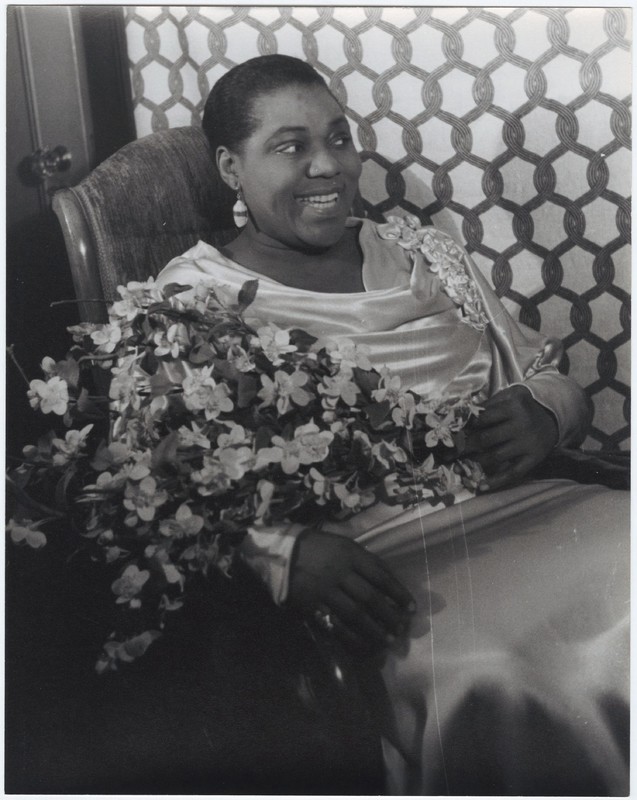 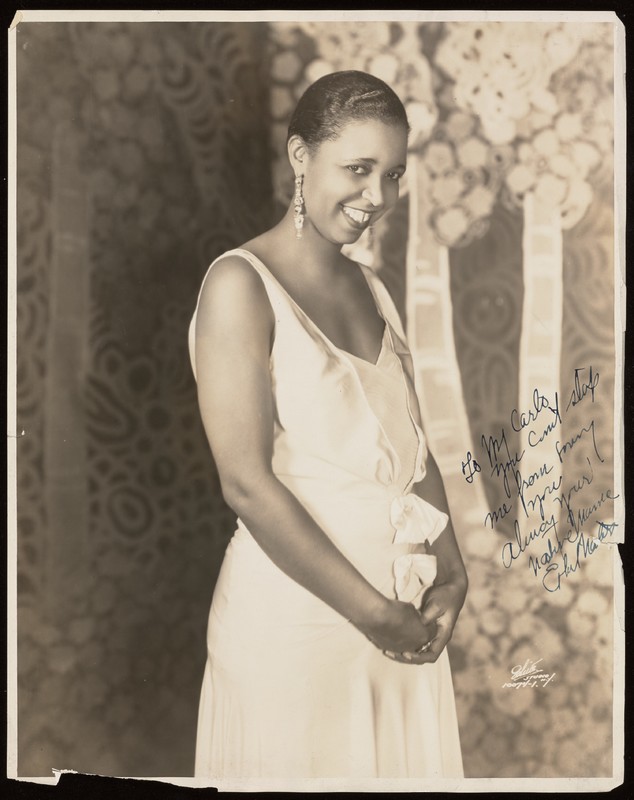 The vogue for African American culture brought a musical form known as the blues out of the rural south and into broad circulation. Female blues singers like Bessie Smith (“the Empress of the Blues”), Gertrude “Ma” Rainey (“the Mother of the Blues”), and Ethel Waters captivated audiences with their songs of heartbreak, misfortune, and misery. As Langston Hughes observed of the strangely cathartic form, “The mood of the blues is almost always despondency, but when they are sung people laugh.” In an article for Vanity Fair, Carl Van Vechten compared the vocal styles of Bessie Smith, Clara Smith, and Ethel Waters, bringing all three singers to a broader audience. Van Vechten never became close friends with the irascible Empress, though he did photograph her on one occasion in his studio, just a year before her tragic death in an automobile accident.

Ethel Waters met Van Vechten backstage after a performance, and the two became fast friends. In her letters to Van Vechten, Waters uses a variety of playful salutations, including “Darling Pal” and “My Nordic Lover.” Waters was one of Van Vechten’s most photographed subjects, with hundreds of portraits of her spanning decades.

The Rise of Race Records

The emergence of blues as a popular form was fueled by a nascent recording industry. After a recording of Mamie Smith singing Perry Bradford’s “Crazy Blues” sold over 100,000 copies in 1920, record companies like Victor, Okeh, and Vocalion produced 78rpm records by the thousands to be marketed explicitly to African Americans. Harry Pace, who had previously partnered with W. C. Handy in a sheet music publishing venture, founded the Pace Phonograph Corporation in 1921 with the label Black Swan. His recording of Ethel Waters singing “Oh Daddy” topped the charts. The race record industry was not confined to blues and jazz; recordings of various jubilee singing groups, such as the Fisk Jubilee Singers, were also popular. Nor were race records purchased exclusively by African Americans; many white listeners collected them as well. Carl Van Vechten donated his collection of hundreds of 78s as part of the James Weldon Johnson Memorial Collection; today they are housed in the Historic Sound Recordings Collection in the Irving S. Gilmore Music Library. 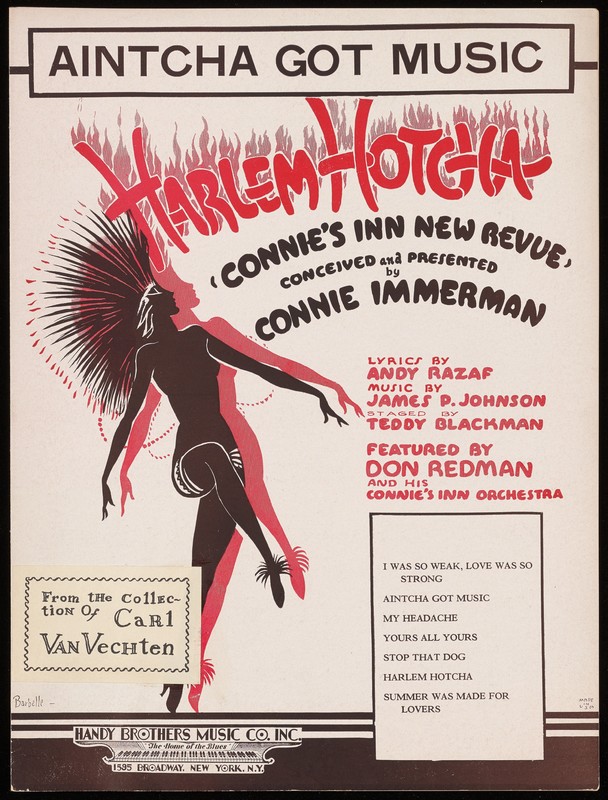 Cover of Sheet Music for "Aintcha Got Music" from Harlem Hotcha, ca. 1932

Harlem’s clubs ushered in the era of big band music, beginning with the celebrated jazz orchestras of Fletcher Henderson, Duke Ellington, and Cab Calloway, all of whom headlined for a time at the storied Cotton Club. These clubs were widely advertised to whites downtown: in 1929 Variety published a list of eleven Harlem night clubs catering to white patrons. Of these, the top three were The Cotton Club, Connie’s Inn, and Small’s Paradise—Small’s was the only one of these three that allowed African American customers on its floor. The injustice and voyeurism led Langston Hughes to write to Claude McKay in 1928, “Harlem cabarets are disgracefully white. The only way Negroes get in nowadays is to come with white folks, whereas it used to be the other way around.” 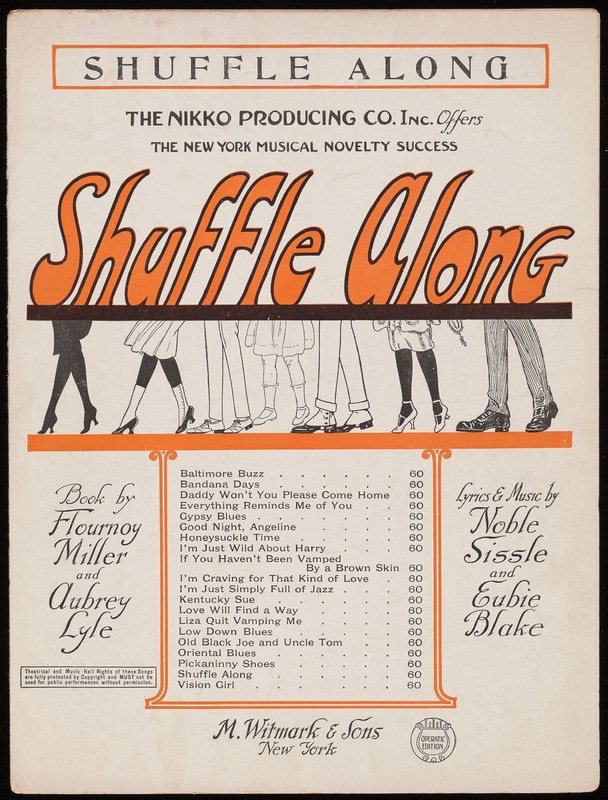 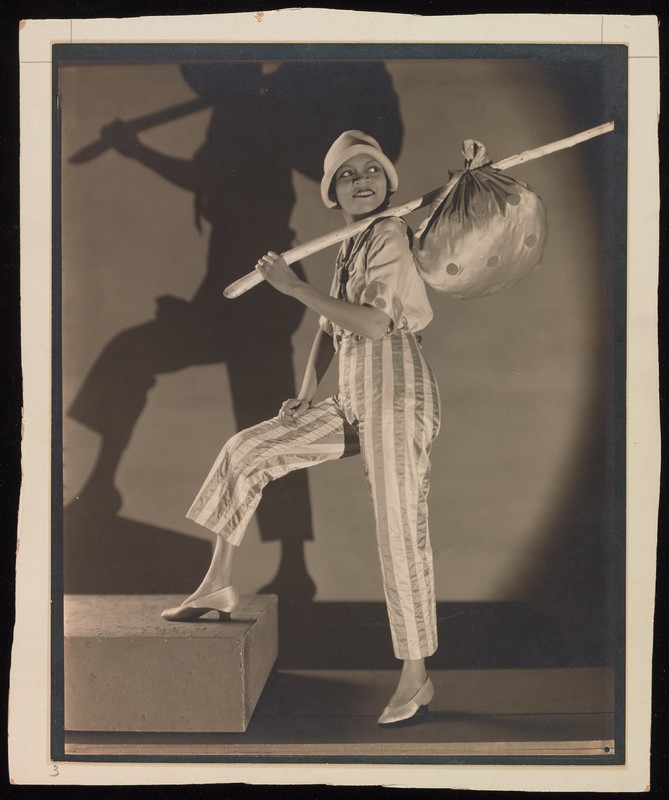 In 1921, two veteran vaudeville duos—the songwriting team of Noble Sissle and Eubie Blake, and the comedy team of Flournoy Miller and Aubrey Lyles—teamed up to stage an all-African American musical. The result, Shuffle Along, became a sensation. The show ran for 504 performances in New York before touring for two years, netting enormous profits for its creators.

Chiefly remembered for its songs, including “I’m Just Wild about Harry” and “Gypsy Blues,” Shuffle Along also revolutionized musical theater, refashioning the chorus line as a group of dancers performing fast-paced, synchronous routines, rather than standing in place in elaborate costumes. Future stars passing through its cast included Josephine Baker; the show was also the breakthrough performance of Florence Mills. Mills, nicknamed the songbird of Broadway, would go on to star both in New York and overseas in Lew Leslie’s Blackbirds musical revue. Though Mills died tragically in 1927 at the age of 31, the changes brought by Shuffle Along would reverberate throughout musical theater for decades to come. 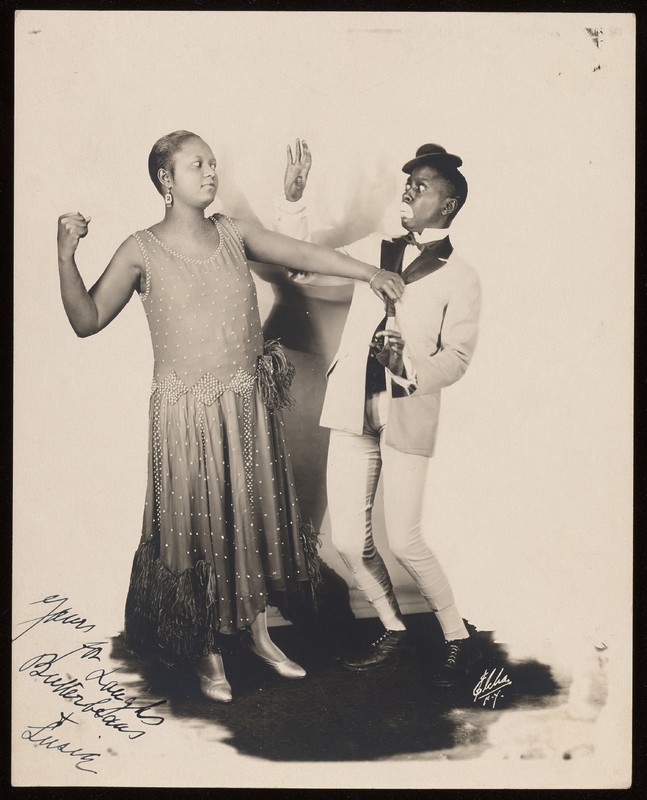 Photograph of Butterbeans and Susie, ca. 1925

Butterbeans and Susie, a vaudeville act created by Jodie and Susie Edwards, featured the bickering and sexual double-entendres of an older married couple. They were regular performers on the vaudeville circuit managed by the Theater Owners Booking Association, or TOBA. TOBA’s treatment of African American performers was so notorious that its acronym was glossed by some as “Tough on Black Actors” (or “Asses”). Because many of the most prestigious theaters did not participate in the association, TOBA performers were often considered inferior to Broadway performers.

Zora Neale Hurston once proclaimed that “Butterbeans and Susie, Bojangles [Bill Robinson] and Snake Hips [Earl Tucker] are the only performers of the real Negro school it has ever been my pleasure to behold in New York.” 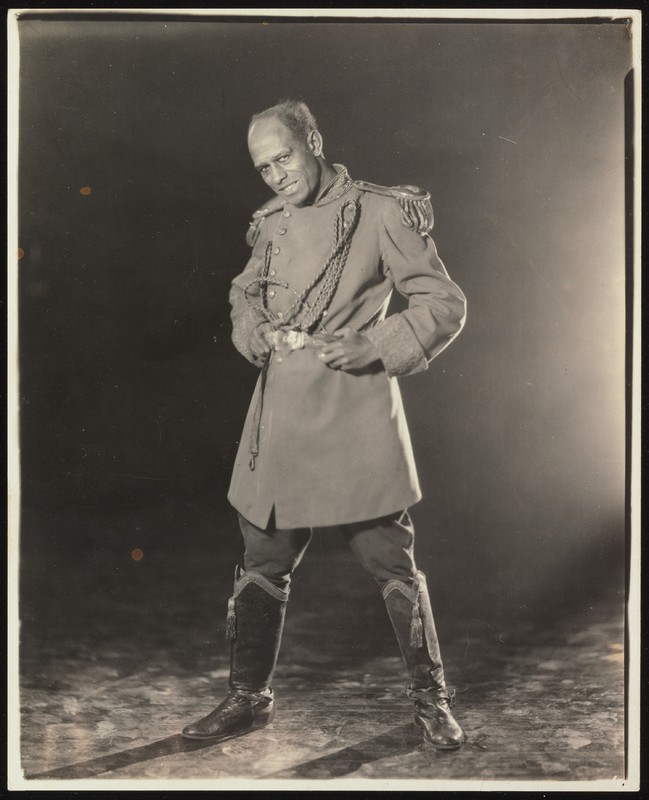 Photograph of Charles Gilpin in The Emperor Jones, 1920. 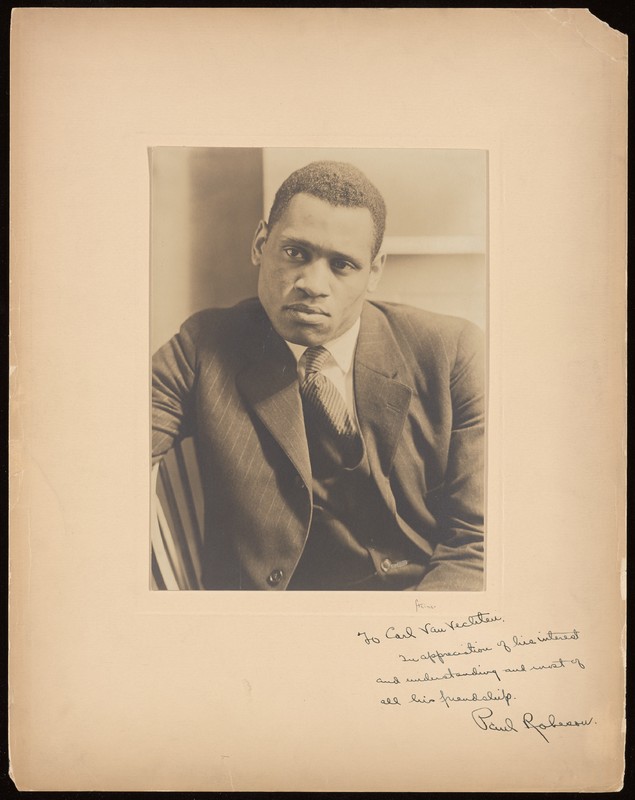 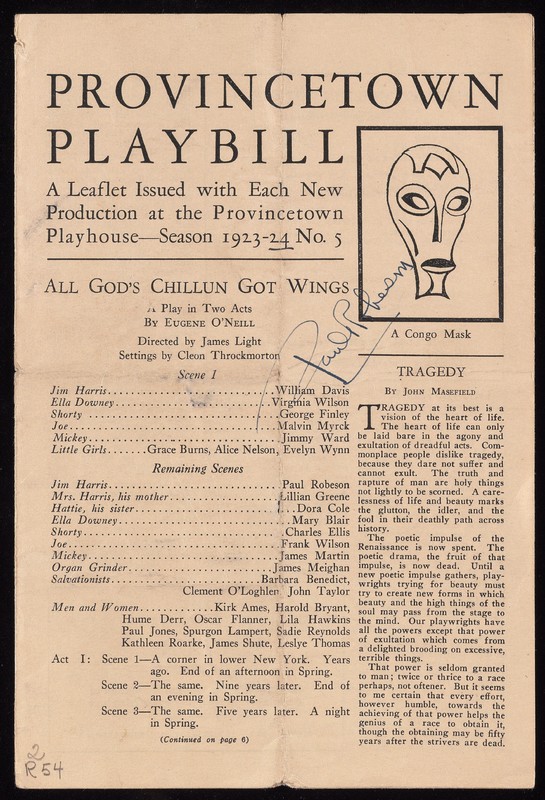 Provincetown Playbill for All God’s Chillun Got Wings, 1923

In an essay published in Theatre Arts Monthly, Alain Locke credited the actors appearing in these plays as much as the white playwrights with the creation of new dramatic possibilities. Charles Gilpin created the title role of The Emperor Jones, and he would be followed in 1924 by Paul Robeson, who rose to stardom in a noted revival of the play while he also starred in All God’s Chillun Got Wings.

A Window onto Catfish Row

Photograph of the cast of Porgy on the Boardwalk in Atlantic City, 1929 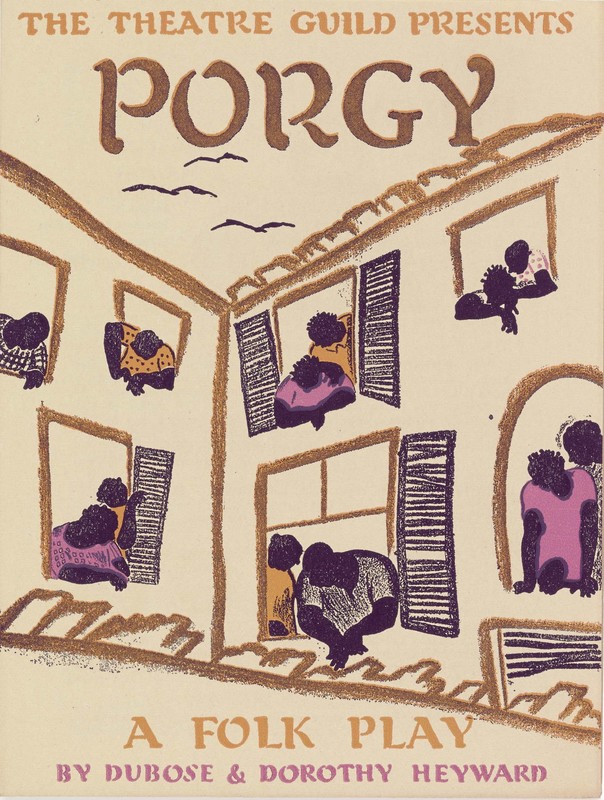 Adapted from white South Carolinian DuBose Heyward’s novel by his wife Dorothy, Porgy was based on Heyward’s observations of the Gullah communities in his native Charleston, South Carolina. The play’s claims to verisimilitude were reinforced by the detailed scenery of Catfish Row designed by Cleon Throckmorton. Produced by the Theatre Guild, the play’s enormous cast afforded opportunities for some of Harlem’s finest actors, including Georgette Harvey, Rose McClendon, and Frank Wilson. Writers Wallace Thurman and Richard Bruce Nugent responded to an open casting call for extras and were accepted; Thurman dropped out, but Nugent toured with the company for two years. The panoramic photograph of the cast on Atlantic City’s boardwalk features McClendon in a turban and raccoon fur coat directly behind Porgy’s goat; Georgette Harvey is to her right; Nugent stands two rows behind McClendon. In 1935, George and Ira Gershwin would adapt the Heywards’ play into their famous folk opera Porgy and Bess.

It was McClendon’s enduring dream to form a successful dramatic theater in Harlem. In 1935, she co-founded with Dick Campbell the Negro People’s Theatre, which staged an all-African American cast production of Clifford Odets’s play Waiting for Lefty. The success of the group caught the attention of the planners of the Federal Theatre Project, and the gravely ill McClendon was able to see the FTP’s Negro Units come to fruition before her death in 1936 from pleurisy. 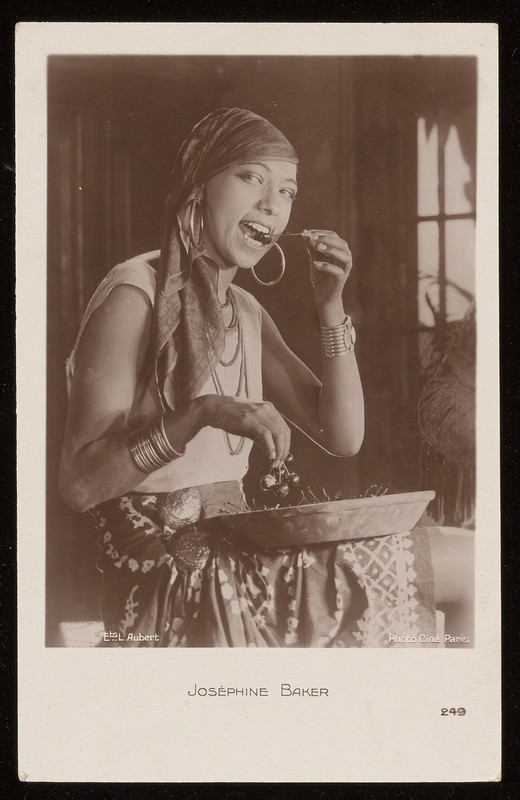 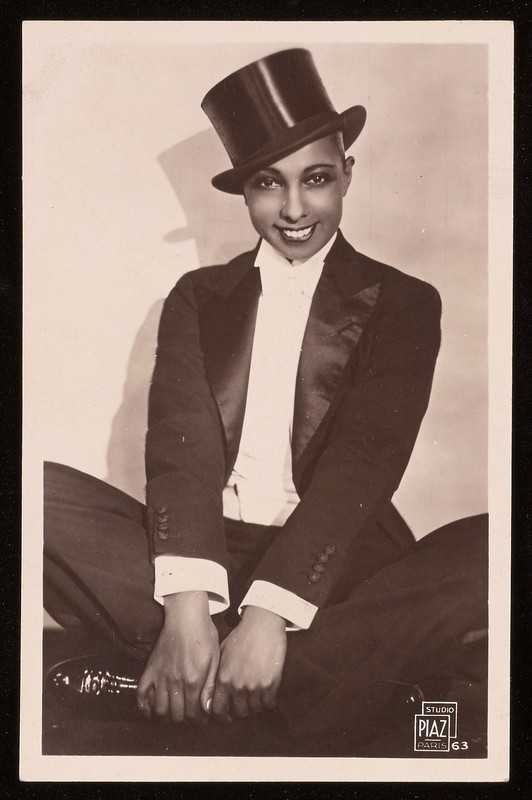 One of many postcards of Josephine Baker, taken by Waléry Manuel and Henri G.L. Manuel Freres. 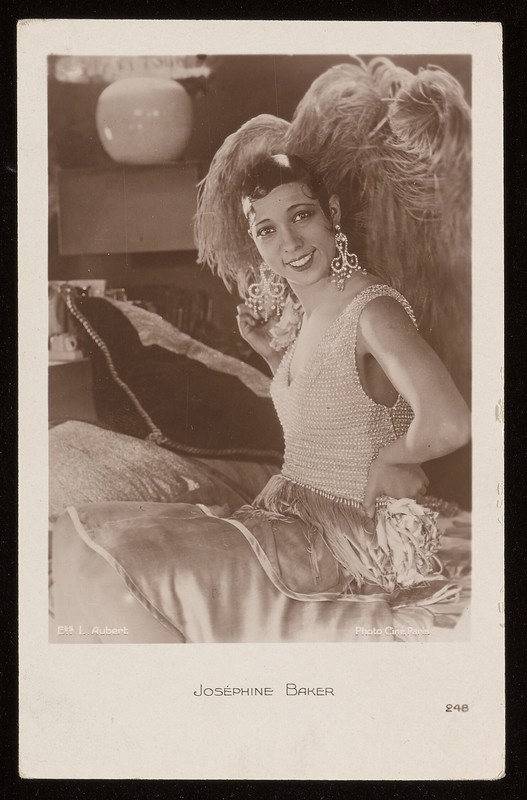 Having first achieved recognition in the touring company of Shuffle Along, Josephine Baker took Paris and the world by storm when she appeared in La Revue Nègre in 1925. The danse sauvage, performed topless in a feathered skirt, shocked and delighted Parisian audiences. Starring at the Folies-Bergère and frequently outdoing her own audacity, Baker next appeared in a skirt made entirely of bananas.

These postcards hint at the extent to which Baker’s image circulated in this period. She was photographed in several of Paris’s most popular studios, including Walery, Gaston and Henri Manuel, and Studio Piaz. Other photographers included Paris-based emigres Dora Kallmus (“Madame d’Ora”), Boris Lipnitzki, and Arthur O’Neill. As postcards that could be sent through the mail, the cards serve as a nice figure for Baker’s transatlantic appeal, as well as her encapsulation of both technological modernity and the so-called primitive alike.

Mr. Bojangles, the Mayor of Harlem 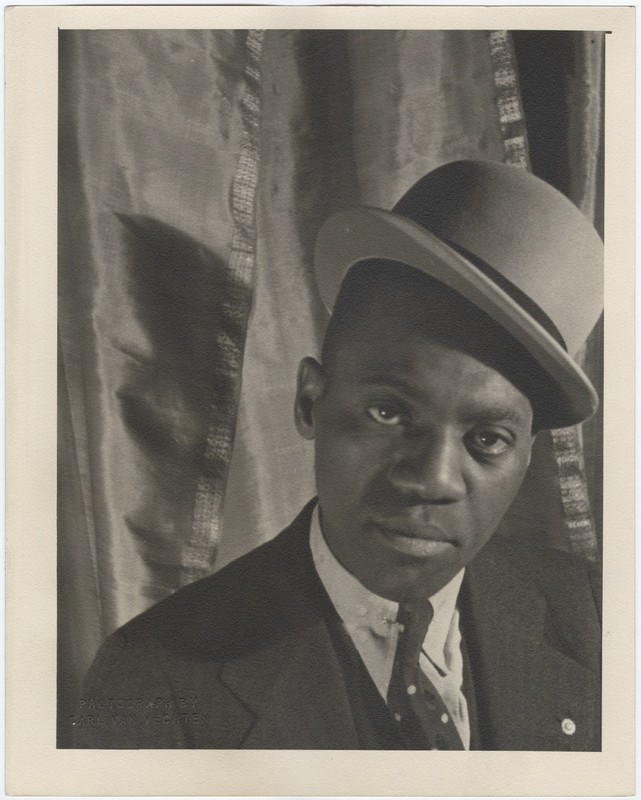 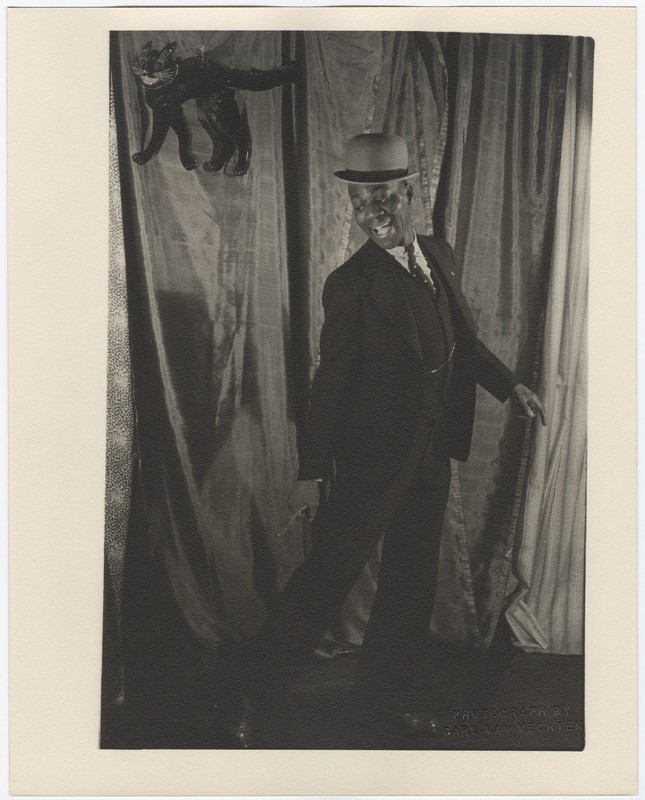 According to his own self-distributed legend, Bill Robinson picked up both the nickname “Bojangles” and the name “Bill” before he was twelve years old: he claimed to have been given the name Luther and to have borrowed his brother’s name, Bill, because it suited him better. Robinson began his performing career on the vaudeville circuit as a “pick” or “pickaninny” child stock character. In 1892, he appeared in the landmark African American musical The South Before the War. By 1920, Robinson was a staple on the vaudeville circuit, the most celebrated tap dancer of his time.

Perhaps surprisingly, Robinson did not debut on Broadway until 1928, when he was 50 years old and rescued Lew Leslie’s Blackbirds revue from failure. Sometimes criticized for his willingness to play buffoonish, even stereotypical characters, Robinson was an ardent defender of African American performers’ rights. He was founding honorary president of the Negro Actors Guild, and he is often credited as the first African American comedic performer to appear onstage without blackface makeup. Robinson became one of the highest paid African American performers of his time, but—thanks to his legendary generosity and a gambling habit—he died without a penny to his name in 1949. Friends ensured a memorial service that did this legend justice. 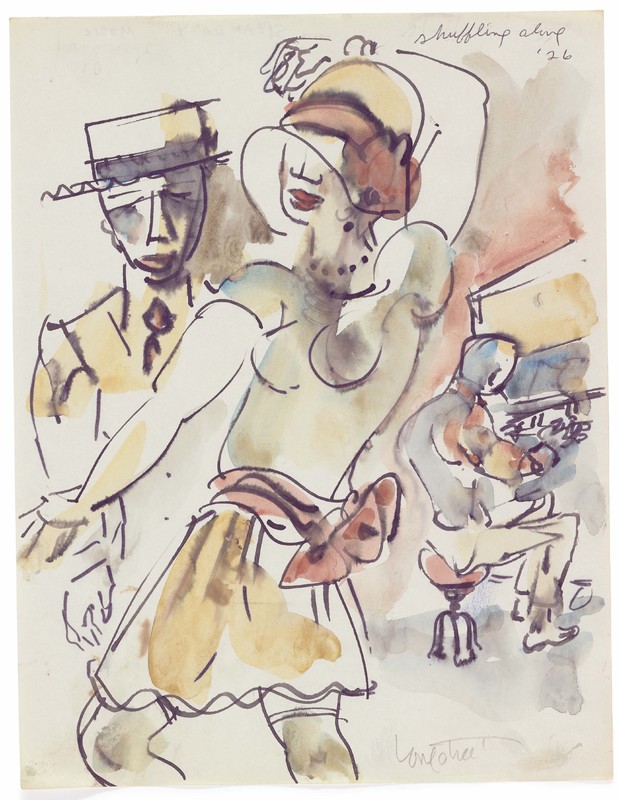 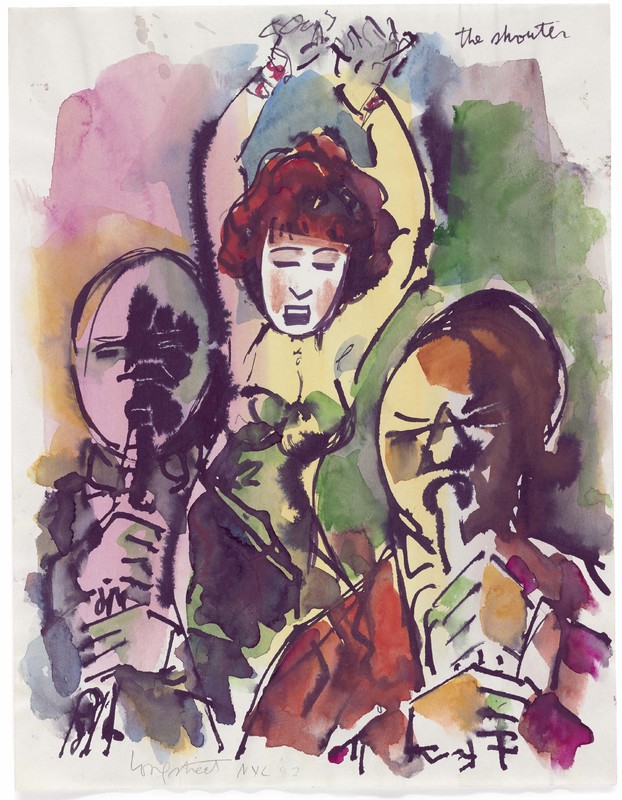 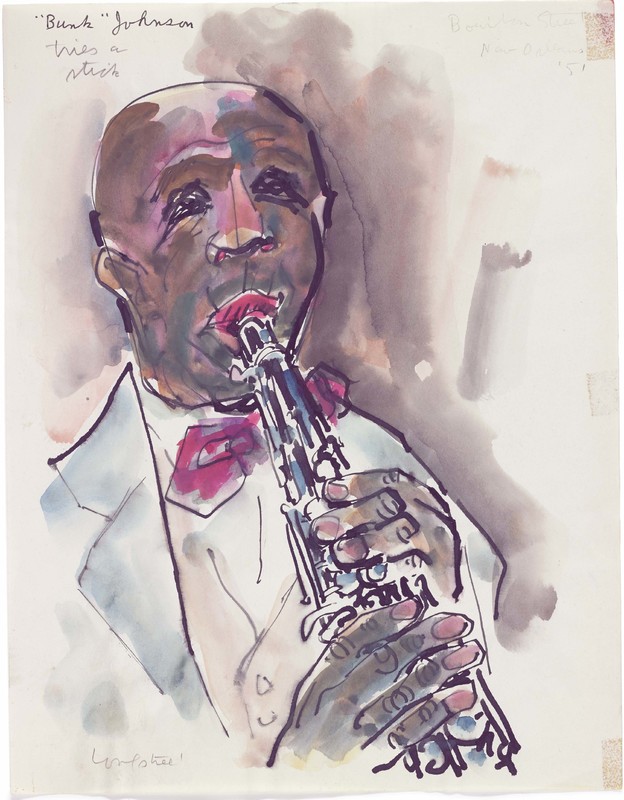 With the advent of the Charleston in 1923, Harlem quickly became famous for the many influential dances introduced in its cabarets and often popularized by their inclusion in Broadway musicals. With suggestive names like the black bottom, the shimmy, the hootchi-cootchi, and the scronch, these dances delighted performers and onlookers alike. They inspired jazz aficionado Stephen Longstreet, whose watercolor Harlem sketchbook attempts to capture something of the dynamism of the dances. Miguel Covarrubias frequently caricatured the dances in his Vanity Fair features. In a piece written with fiction writer Eric Walrond, Covarrubias called out Broadway musicals for borrowing from the cabarets. In another piece, Covarrubias hinted at the color prejudices held against chorus girls and cabaret performers.