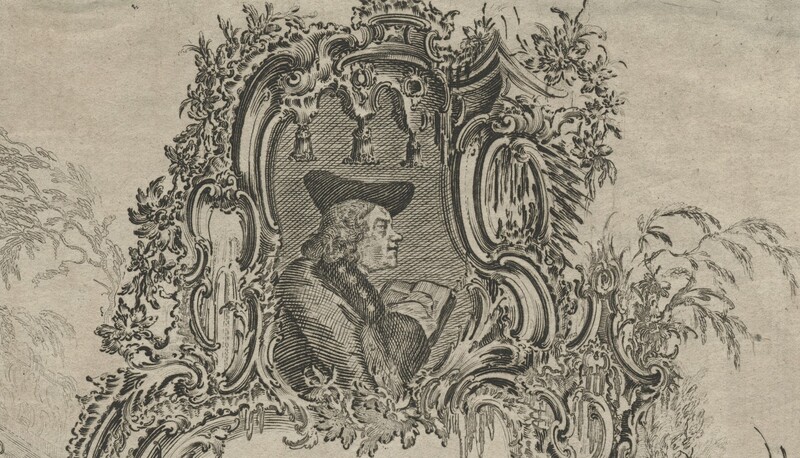 In the Biographical Anecdotes of William Hogarth, John Nichols (1745–­1826) narrates the following episode: “Soon after the peace of Aix la Chapelle [1748], [Hogarth] went over to France, and was taken into custody at Calais, while he was drawing the gate of that town…. He was actually carried before the governor as a spy, and, after a very strict examination, committed a prisoner to Grandsire, his landlord, on his promising that Hogarth should not go out of his house till it was to embark for England.” William Hogarth (1697–­1764) depicted the event in the background of a painting he produced upon his return and later engraved with the title O the Roast Beef of Old England (1749). The artist appears in profile, absorbed in his drawing, with his eyes cast straight in front of him while the spear of an invisible French officer falls from the back onto his shoulder. This representation quickly became one of the most iconic images of the artist and affirmed his capacity to draw an observed topography after nature. Hogarth's self-portrait in profile appeared widely. It was notably appropriated by John Smith (f. 1750–1792) for his own shop-sign and trade card promoting his business as a map and print seller. The shop-sign portrait further inscribed Hogarth within the visual fabric of the city that was his primary muse.

Building on the Calais anecdote, this exhibition explores William Hogarth’s topographical work in three of his lesser-known works. Topography is understood here in the broad definition provided in Dr. Johnson’s Dictionary of the English Language (1755): “Description of particular places.” First, a series of engraved illustrations that the artist produced in his mid-twenties for the Travels of the French explorer Aubry de La Motraye (1723) offers an opportunity to study his methods to depict territories he only visited through textual descriptions. Then the Five Days Peregrination (1732), an impromptu trip to Kent on which Hogarth embarked with four fellows to satirize the tradition of the Grand Tour as well as the practice of antiquarians in Britain, demonstrates his irreverent relationship with historical traces of the country’s past. Finally, Hogarth’s engraved frontispiece for Joshua Kirby’s influential treatise on perspective responds to the longer tradition of perspective studies in Britain and participates in contemporary debates surrounding the respective roles that artists should grant to the eye and to mathematical rules in their representations of space.

“William Hogarth’s Topographies” seeks to contribute to recent historiographic efforts that reconsider the artist’s work in a more international perspective, most notably the “Hogarth and Europe” retrospective at Tate Britain (November 2021–­March 2022), which stresses the necessity of approaching the artist’s work in the light of a broader European and global context that resonates in his production. The online exhibition draws primarily from the extensive collections of the Lewis Walpole Library, with occasional forays into other Yale and outside collections.

This exhibition was produced in Omeka by Kristen McDonald, Public Services, the Lewis Walpole Library.

For questions/comments about the exhibit, please contact The Lewis Walpole Library, walpole@yale.edu