William Hogarth was in his mid-twenties when he joined George Vertue (1684–1756) and a group of British engravers to design the plates for the Travels through Europe, Asia, and into parts of Africa. Published in 1723 by the French explorer Aubry de La Motraye (1674?–1743), this book in two volumes comprised vivid descriptions and many illustrations which afforded European armchair travelers a great deal of invented memories from the East and beyond. La Motraye’s travelogue crowned more than two decades of world exploration, particularly throughout the Mediterranean, Scandinavia, and the Ottoman Empire. During his travels, the author collected historical facts, geographical and ethnographic information, artifacts, as well as all kinds of antiquities.

In the early 1720s, Hogarth was establishing himself as book illustrator after leaving the studio of Ellis Gamble (1712–1733), where he had worked as an apprentice silversmith. The illustrations for the Travels were one of his earliest endeavors as an independent artist. He designed a dozen plates scattered throughout the book, most of which he signed. His subject matter ranges from maps and antiquities to ethnographic scenes, including the representation of a landscape in Sápmi, a region close to the Arctic Circle then known in the West as “Lapland.” This view shows an encampment, in and around which various figures attend to their daily activities described at length in La Motraye’s text.

Hogarth and his fellow engravers never traveled to the places they were meant to represent and therefore relied on preexisting visual sources, which they adapted to La Motraye’s textual commentaries. This section sets Hogarth’s invented topography of Sápmi in dialogue with other depictions of the same regions produced around the same time. All of these images, whether they are included in scientific books, travel diaries, or take the form of caricatures or even panoramas, participate in a phenomenon of cultural dispossession affecting indigenous culture, which contemporary Sámi artists are reclaiming. 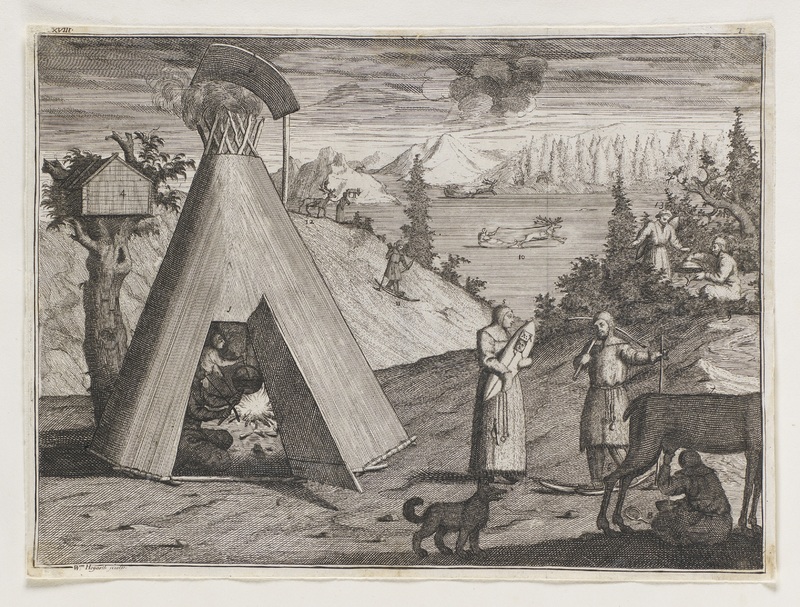 La Motraye’s Travels were first published in English in 1723. A French version of these Voyages appeared in The Hague in 1727, and a revised bilingual edition was issued in 1732. This plate illustrates the twelfth chapter of the second volume, dedicated to an exploration of Sápmi on which La Motraye embarked at his own initiative. He departed from Stockholm on April 7, 1718, and traveled northward for about three months. In this engraving, Hogarth follows the text à la lettre. Inside of the traditional tipi—called “lavvu”—he portrayed a woman according to La Motraye’s observation that “the Lapland Women do their Pewter or Lead Wire with their Teeth, through the divers Holes of a flat Piece of Rhen-Deer Horn.” The small wooden structure perched on top of a tree trunk behind the lavvu represents a “magazine” (i.e., storehouse) in which the locals stock their provisions. On the right-hand side, a woman milks a reindeer beside a man and a woman in traditional winter dress or “Burkamudan” made of the reindeer skin. Hogarth also portrayed in the background two figures in lighter clothes used during the warmer season. La Motraye’s account is particularly remembered for his enthusiastic descriptions of “skidders,” the ancestors of modern skis, “which were lined at the Bottom with Elk Skin” so that “those who know how to use ’em very cleverly, can in sliding out-strip the very Swiftest Beasts of the Field.” The figure numbered 11 in Hogarth’s print, sliding down the hill in the middle ground, provides a demonstration of this then-unusual technique. 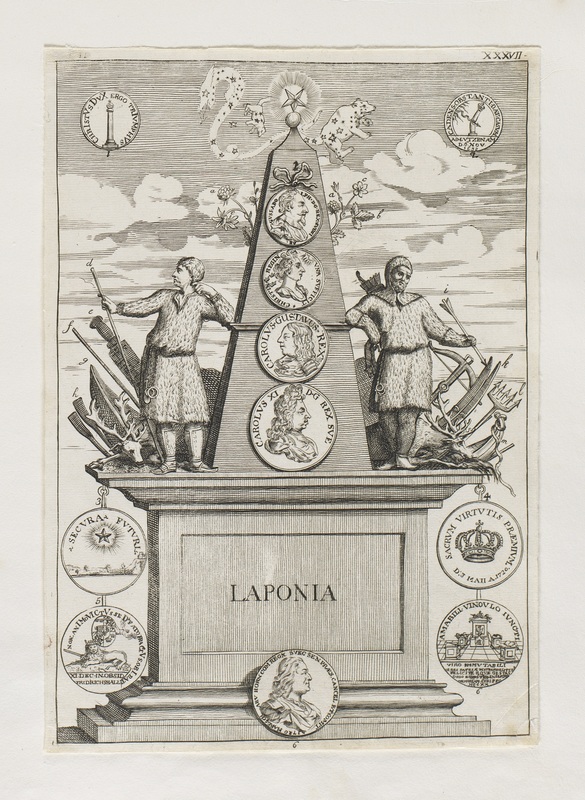 Although unsigned, this other print from La Motraye’s Travels might have been—at least partially—designed by Hogarth. It represents the “Laponia” monument which the Swedes called “Runar.” On the entablature stand two Sámi—the inhabitants of the region—dressed in traditional reindeer furs, at rest in the midst of polar hunting paraphernalia including reindeer head trophies, harpoons, and crossbows. Both lean against an obelisk on and around which hang medallions of the successive kings that claimed ownership of their land. Springing from behind the monument, below the Ursa Major and Minor constellations, a few specimens of herbs, flowers, and fruit exemplify the local flora meticulously inventoried by successive explorers. A key accompanying the illustrations identifies the berries (a and b) as Fragaria Suevorum fructificans which, as La Motraye explains, served in the preparation of various remedies. They were infused with “a moderate Quantity of Cinnamon and Saffron-Flowers.” The locals also transformed the berries into a liquor in which they mixed “Cinnamon, Cloves and Mace…, and another kind of Indian Spice, which they call Paradice-Grain.” These observations indicate that in the early eighteenth century the spices from the so-called West Indies were already well integrated into the region’s culinary traditions. 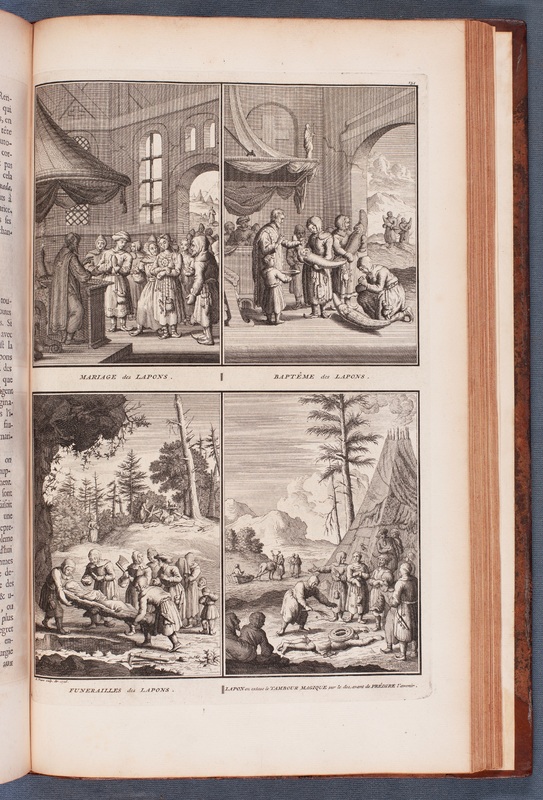 A bestseller of the early eighteenth century, The Ceremonies and Religious Customs of the Various Nations of the Known World was authored and published in French between 1723 and 1737 by Jean-Frédéric Bernard (1680–1744). The seven volumes were illustrated by Bernard Picart (1673–1733), a French engraver established in Amsterdam, and shortly thereafter translated into English. Picart designed these four prints of Sámi ceremonies for a volume published three years after La Motraye’s Travels. In the upper half of the page, he depicted a Sámi wedding and baptism taking place in a church built by Swedish missionaries. They contrast with the two other representations of indigenous customs taking place in nature: a funeral at the bottom of a rock formation and the ceremony of the magic drum, which fascinated most travelers who disparagingly associated this practice with witchcraft. 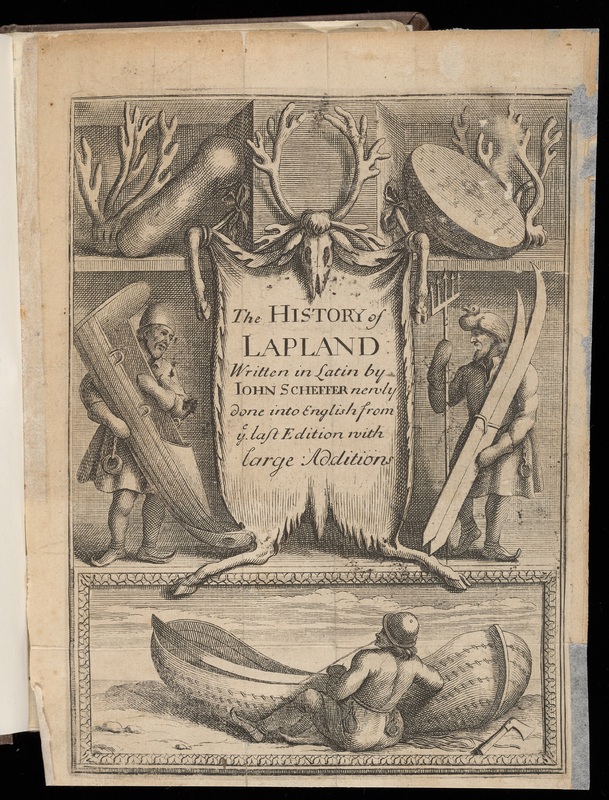 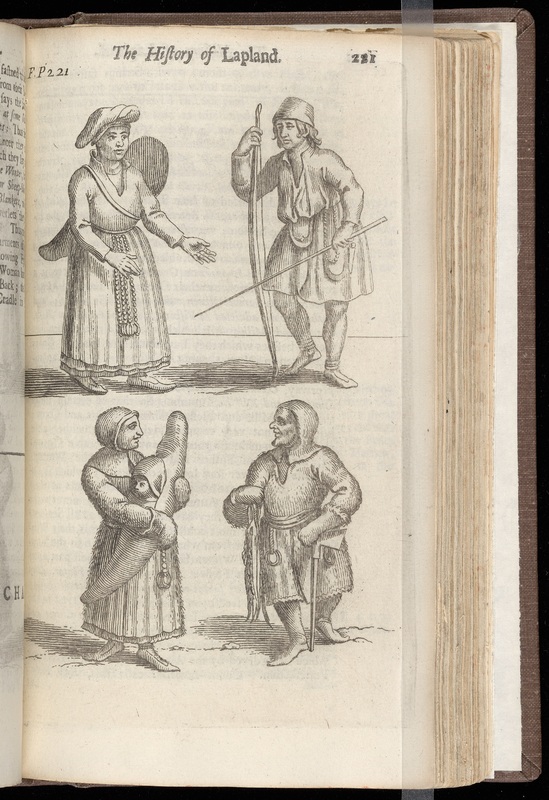 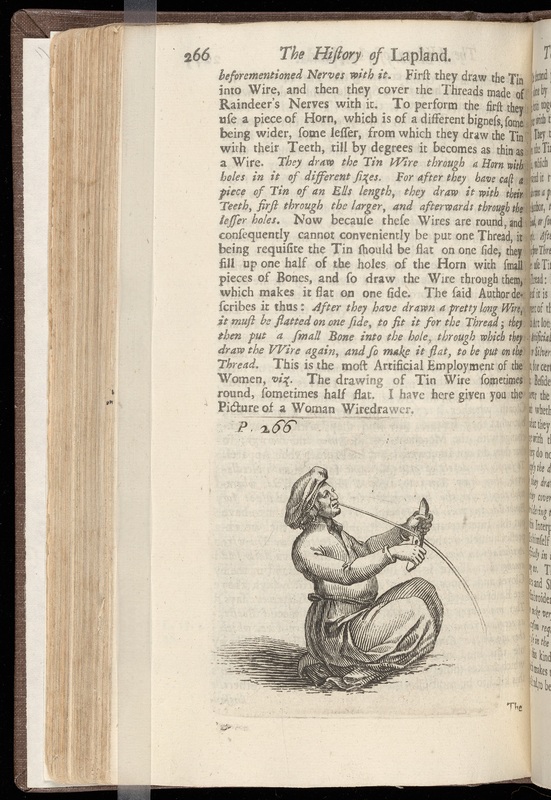 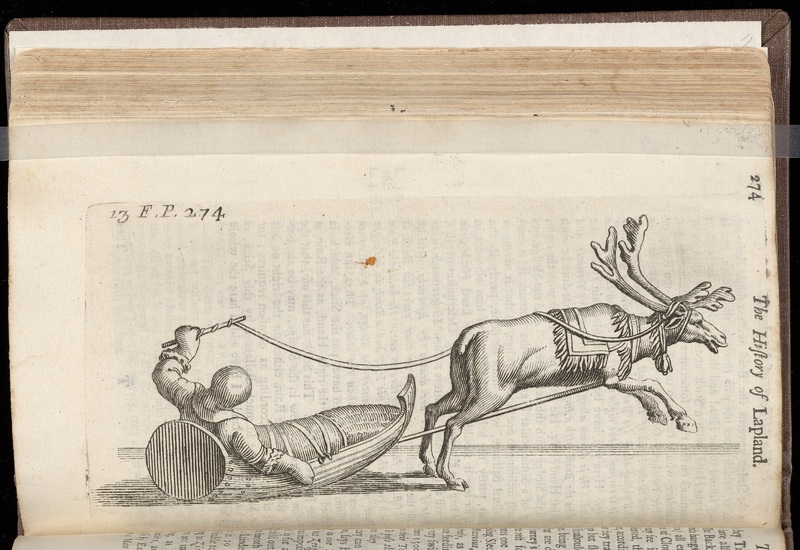 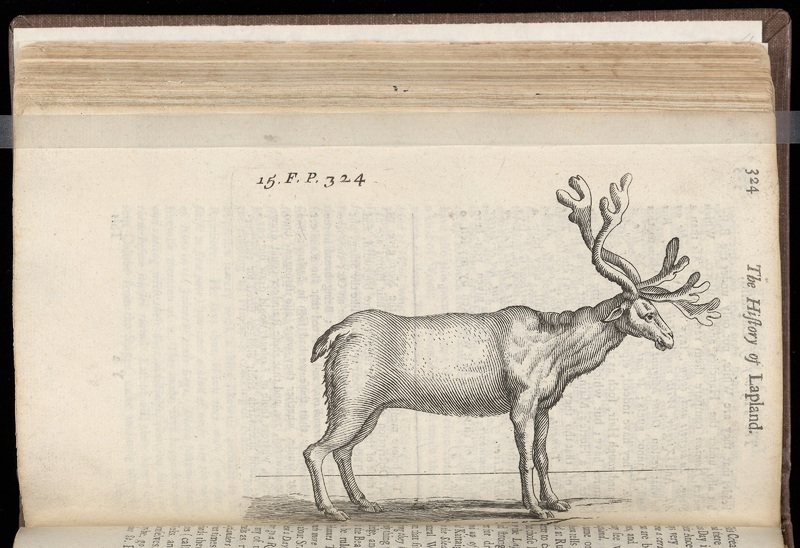 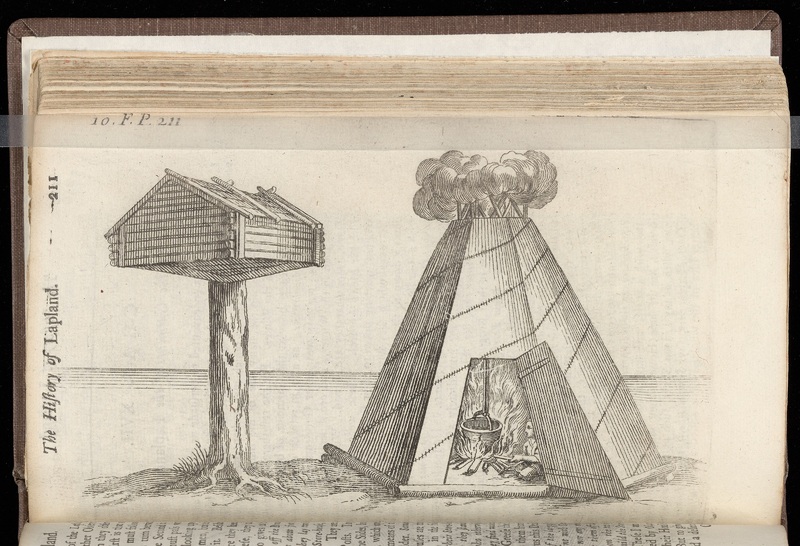 William Hogarth and Bernard Picart shared a common source of inspiration: the illustrated History of Lapland written by the Swedish humanist John Scheffer (1621–1679). The book was first published in Latin in 1673 and translated into English in 1674. Aubry de La Motraye read Scheffer’s book and refers his readers to this more recent edition published in 1704, which he certainly presented to the group of artists in charge of illustrating his Travels. Hogarth’s view of “Lapland” shows striking resemblances to several of the book’s plates: the lavvu with a wire drawer, the storehouse, the mother and her child standing in the middle, the sledge pulled by a reindeer on the ice, and even the reindeer profile in the foreground, all unequivocally come from the engravings of Scheffer’s book. Hogarth constructed his own scene as a collage of figures, slightly adapting them to La Motraye’s descriptions while inventing a Nordic landscape setting. 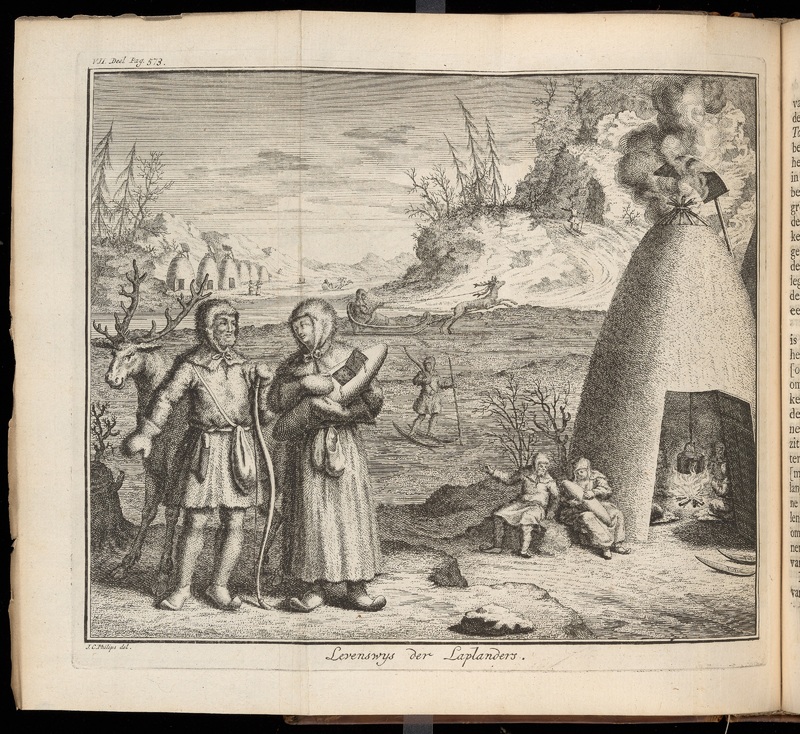 The historian and former soldier of the East India Company Thomas Salmon (1679–1767) published his Modern History, or, The Present State of all Nations between 1724 and 1738. The thirty-one volumes summarized existing literature on the various regions of the world, supplemented with occasional illustrations that also blended previous depictions instead of drawing from direct observations. The Dutch edition, published almost simultaneously, was illustrated by a handful of engravings absent from the original, including a depiction of life in Sápmi by Jan Caspar Philips (ca.1700–1765). Above the lavvu on the right, Philips included an umbrella intended to protect the fire inside from rain and snow, a feature otherwise known only in Hogarth’s print of Sápmi. The assumption that he copied this element from Hogarth’s plate is confirmed by the multiple references made to La Motraye in Salmon’s text. The couple with their child in the foreground, as well as the sledge in the background, are reminiscent of both Hogarth’s view and the woodcuts in John Scheffer’s History of Lapland. 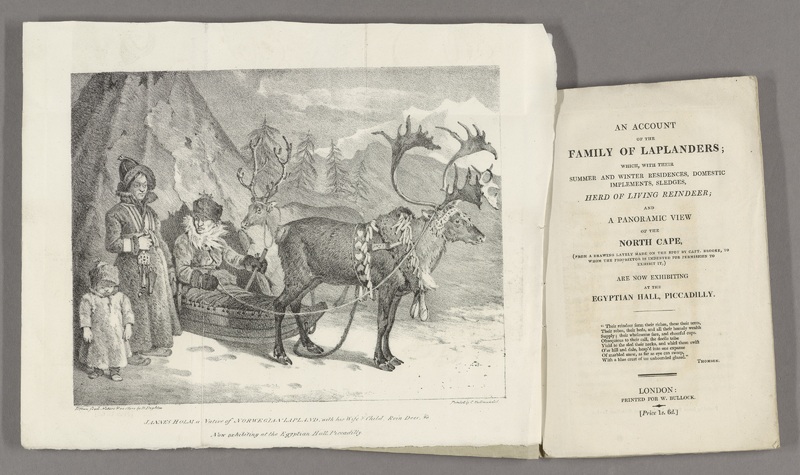 Dennis Dighton
Jannes Holm a Native of Norwegian Lapland with his Wife & Child, Rein Deer, &c.
Lithograph
In [William Bullock], An account of the family of Laplanders…
Published 1822
Yale Center for British Art

One century after the publication of La Motraye’s Travels, the British entrepreneur William Bullock (1773–1849) organized a “Lapland Exhibition” at the Egyptian Hall in Piccadilly, London. The event was advertised in The Times of January 15, 1822, as “A PANORAMIC VIEW of the NORTH CAPE, with a Family of the Lapland Inhabitants full Costume.” Bullock had convinced a family of Sámi—Jens Holm, his wife Karina Christian, and their four-year-old son—to come to London, where they were exhibited alongside a group of reindeer, which died progressively due to their inadaptation to the city’s climate. This print, showing the Sámi family before their lavvu accompanied by a reindeer, served as frontispiece to the short booklet written by Bullock for the occasion, which visitors could purchase to supplement their tour. 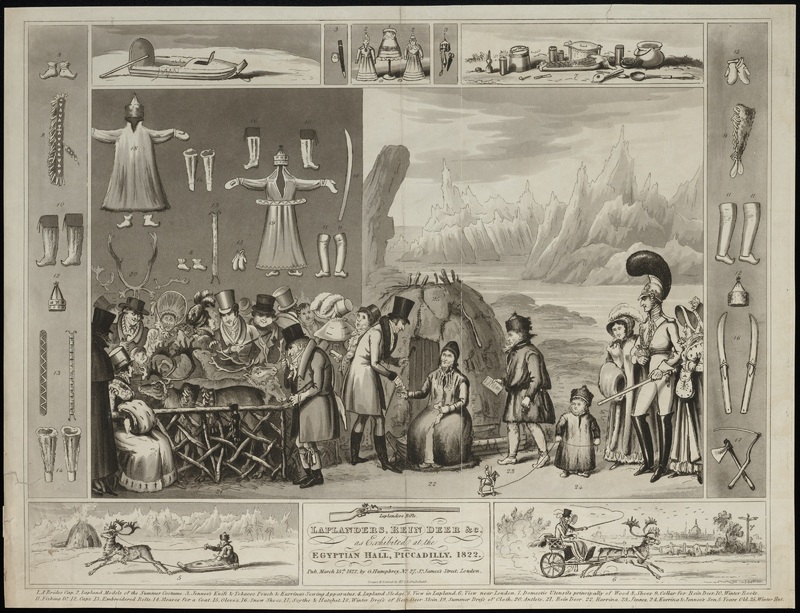 Isaac Cruikshank (1789–1856) provided an evocative treatment of Bullock’s “Lapland Exhibition.” The members of the Sámi family in their traditional fur dresses gather before a “winter hut” set in a painted icy landscape intended to represent their native environment. Around them hang various pieces of clothing and utensils epitomizing Sámi life for Western viewers who could learn about each item in Bullock’s booklet. In the vignettes framing the print’s title, Cruikshank presented a “View near London” with a wheeled carriage drawn by a reindeer on the right, and a “View of Lapland” showing a sledge on a frozen ground carried by the same deer running in the opposite direction. Reindeer were Bullock’s actual priority when he set off for Scandinavia in the winter of 1821: he planned to domesticate these animals in London in order to use them for transportation as well as for their milk and fur. 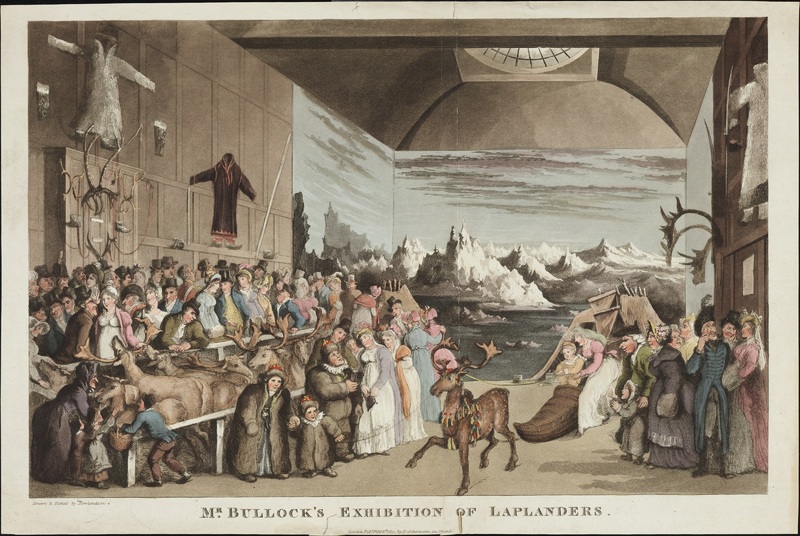 Thomas Rowlandson (1756–1827) also illustrated the “Lapland Exhibition” at the Egyptian Hall but from a different angle, revealing a part of the hors-champ invisible in Cruikshank’s view, and particularly the landscape of Sápmi painted on wood panels covering a mere corner of the room. This cheap décor was a matter of pride for William Bullock, who specified in his booklet that this “Panoramic View of the North Cape” replicated “a drawing made on the spot by Captain Brooke.” Sir Arthur de Capell Brooke (1792–1858) was a geographer who published several travel books on Scandinavia, including Winter Sketches in Lapland (1826). In this print, Rowlandson caricatured the crowds attending the exhibition, and particularly the oppressive rows of visitors surrounding the confined herd of reindeer. The Sámi family stands nearby, looking quite puzzled by another reindeer pulling a white child seated on their sledge next to his encouraging mother, impersonating for a moment a fictive indigeneity. 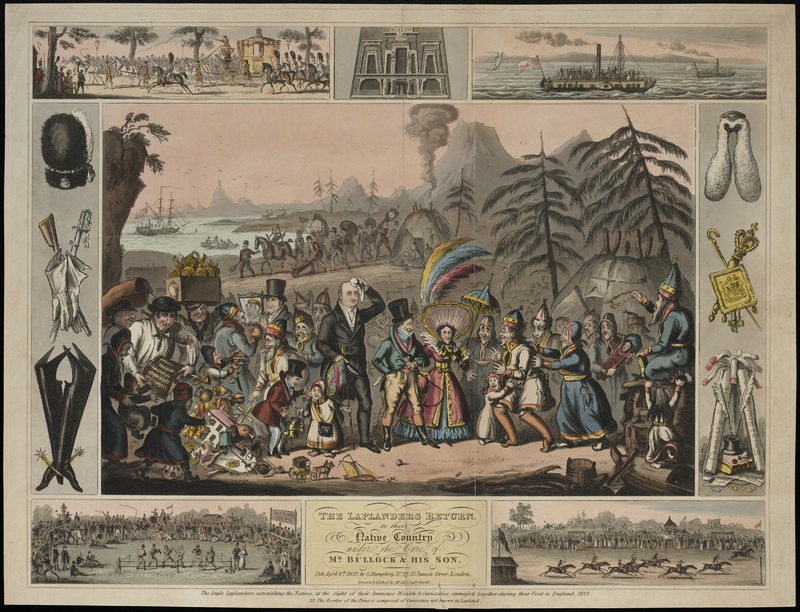 Isaac R. Cruikshank
The Laplanders Return, to their Native Country under the Care of Mr. Bullock and his Son
Etching and aquatint, hand-colored
Published April 8, 1822
The Lewis Walpole Library, Yale University

In this second print, Cruikshank imagined the return of the family of “Laplanders” to their native country after the London exhibition. They are surrounded by a landscape of utter desolation covered by mud and punctuated by a few slender and plucked pine trees.  To their fellows’ bewilderment, Jens Holm, Karina Christian, and their son in the center, exchanged their traditional clothes to adopt London fashion, which Cruikshank illustrated on each side of the frame to return the ethnographic gaze upon the West. A mariner pours out toys from a basket in front of mesmerized children in the foreground, while his colleague carries a box full of crockery behind him, and others further to the rear bring pieces of British furniture. The grayish terrain on which the encounter takes place, and the warmth of the atmosphere that causes Mr. Bullock to wipe his forehead, starkly contrast with Hogarth’s and Brooke’s pristine and snowy landscapes. 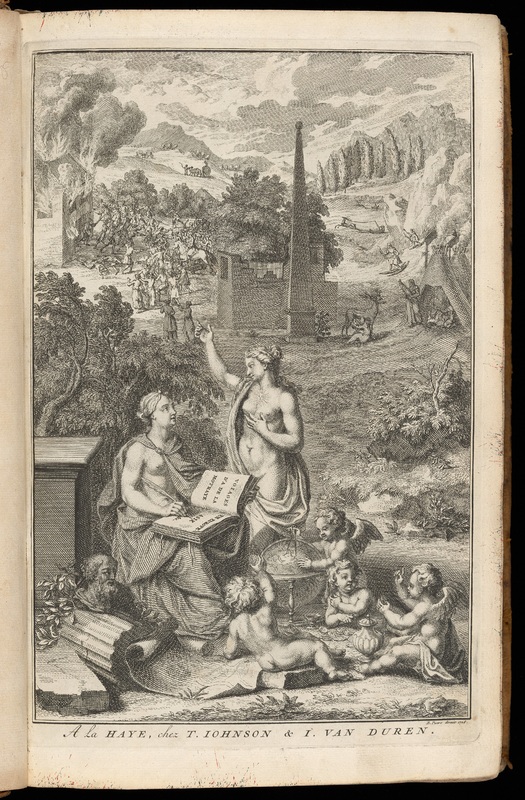 While at work on the Cérémonies et coutumes religieuses, Bernard Picart designed the frontispiece for the first French edition of La Motraye’s Voyages, published in 1727. In the middle ground, he combined details from several of the book’s plates, creating a landscape that visually condenses the geography traversed by the author. Hogarth’s imagined view of Sápmi is thus shrunk and slightly reworked on the right, now facing the ruins of a building, the result of the battle of Charles XII of Sweden against the Turks. The two scenes are separated by a tall obelisk that symbolically separates the warmest and coldest regions visited by La Motraye. Picart exchanged Nordic pine trees for a row of cypresses, confusing even further the northern and southern parts of Europe, while imbuing the scene with macabre omens. In this print, Hogarth’s landscape of Sápmi recedes in the background as a distant memory.