Arnold Klebs and the Founding of the Yale Medical Library

In late 1933, Harvey Cushing returned to his undergraduate alma mater, Yale, as Sterling Professor of Neurology. The following year he suggested to Klebs that they, along with John Fulton, might donate their book collections to Yale as the nucleus of a medical historical collection. That project became entwined with the attempt to get the Yale Corporation to agree to build a Medical Library, in part to house these collections. The Medical School was located on Cedar Street, but the main collection of medical books and journals was fifteen minutes’ walk away at Sterling Memorial Library. After much delay, the Yale Medical Library, designed by Cushing’s Yale classmate Grosvenor Atterbury, was built through 1940 and dedicated in 1941. The Historical Library wing was designed to hold the history of medicine collections. Cushing had died in 1939 and Klebs was unable to travel to the opening of the Library because of the war. However, Klebs’ son-in-law, Rev. Dr. George Stewart, wrote the inspirational words carved over the fireplace in the Historical Library and gave the blessing over the books at the dedication ceremony.

Cushing writes; “Portraits of Yale’s newest building: (1) Day before yesterday (over) (2) Next day – student in the library. H.C. to A.C.K., 14 Oct. 1935 – see what is happening to “our” lot. I asked Richard Light to go up in the Institute of Human Relations and take a snapshot of it. A few days later I found this boomerang on my desk…” The photograph (1) is of Cushing in his library in his New Haven home. The reverse side (2) shows ground cleared on Cedar Street for new construction including the potential library. 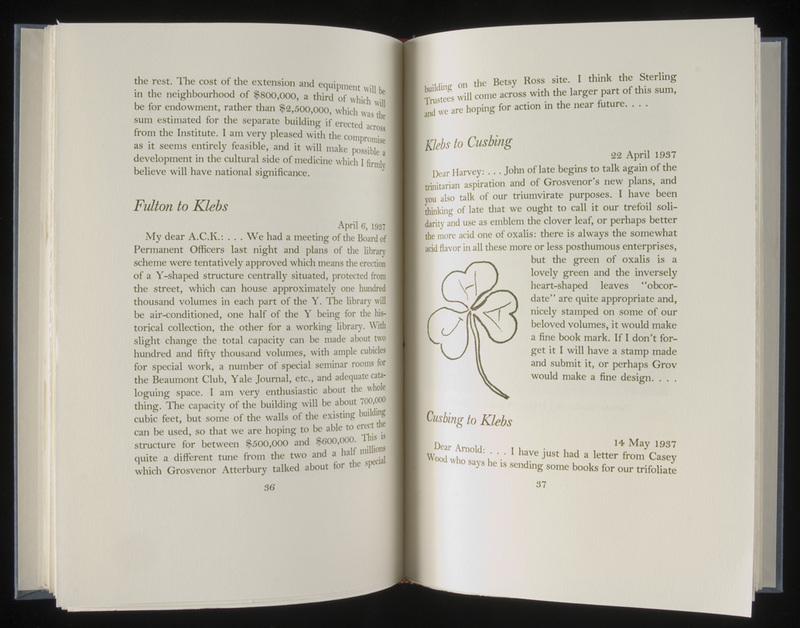 The Making of a Library: Extracts From letters, 1934-1941, of Harvey Cushing, Arnold C. Klebs [and] John F. Fulton ; presented to John Fulton by his friends on his sixtieth birthday, 1 November 1959. New Haven: Yale University Press, c1959.

“Trefoil Solidarity”: The Making of a Library

This small volume, published for John F. Fulton’s 60th birthday in 1959, contains excerpts from the correspondence among Cushing, Klebs, and Fulton on their plans to donate their collections to Yale and the progress of the effort to build a medical library to house them. Klebs designed the oxalis motif on the cover representing the three collections or, as he put it, the “trefoil solidarity.” 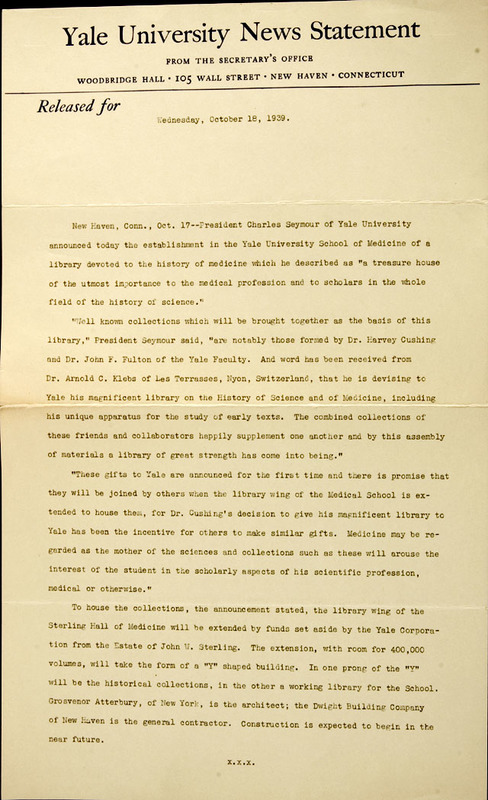 This official announcement appeared eleven days after Cushing’s death. Cushing had received the news that the library would be built shortly before he died on October 7. 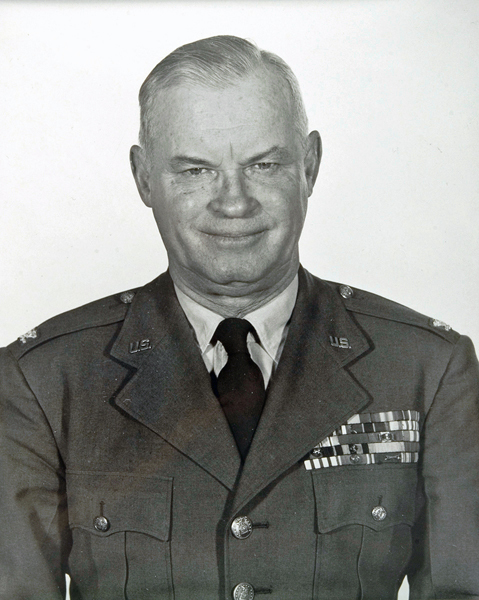 George Stewart (1892-1972) married Klebs’ daughter, Sarah Malcolm Klebs (1899-1957) in 1925. A holder of multiple Yale degrees, Stewart served in both World Wars and wrote several books on his experiences. From 1928 to 1944, he was minister of the First Presbyterian Church of Stamford, Connecticut. Klebs carried on a thoughtful intellectual correspondence with his-son-in-law. 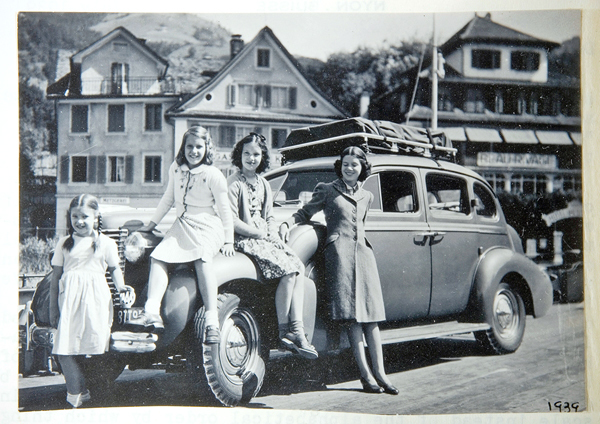 George and Sarah Klebs Stewart had four daughters shown in this photograph taken in Switzerland. It was pasted into a Cushing album of correspondence with Klebs. Left to right: Sarah Malcolm (Sally), Jane, Anne, and Mary. One daughter, Jane Stewart Young, is an honorary member of the Cushing/Whitney Medical Library Associates Board of Trustees, as is also her son, Klebs’ great-grandson, G. Stewart Young. 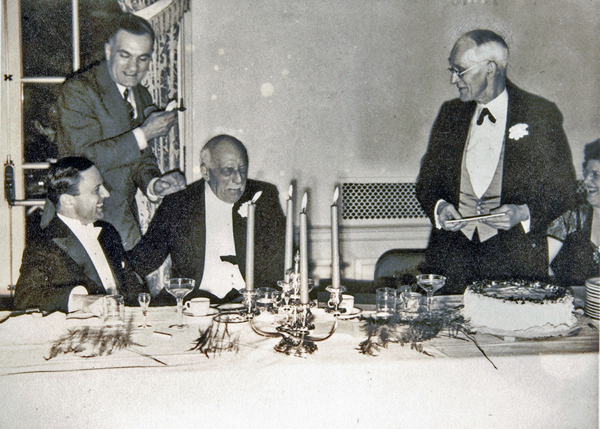 Klebs visited New Haven for the last time in April, 1939 for the celebration of Cushing’s 70th Birthday in conjunction with the annual meeting of the Harvey Cushing Society (now the American Association of Neurological Surgeons). Klebs was seated to Cushing’s right at the banquet and Louise Eisenhardt, M.D., to his left. Ever the bibliographer, Klebs wrote the introduction, titled “Bibliographia animata,” to Cushing’s own bibliography presented by the Harvey Cushing Society to Cushing at the banquet. 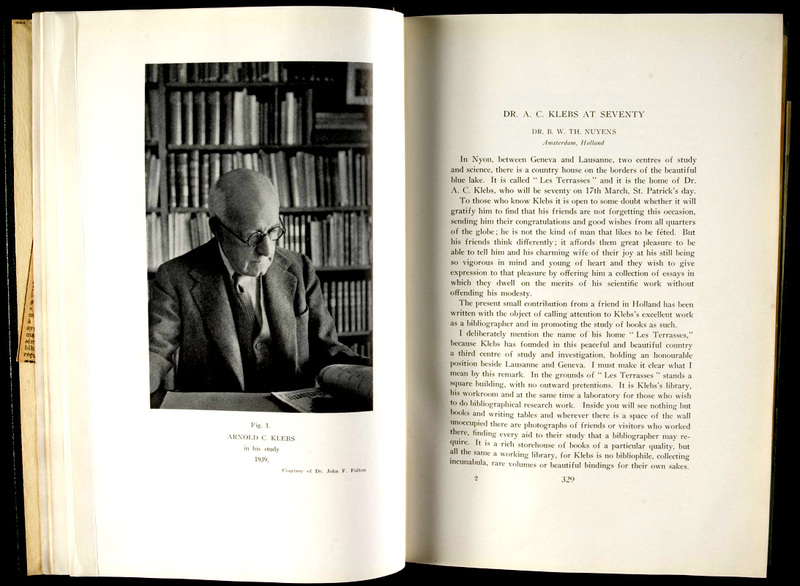 When Klebs turned seventy, the Bulletin of the History of Medicine dedicated an entire issue as a Festschrift. It contained a “congratulatory epistle” by Dr. Henry Sigerist, editor of the Bulletin and head of the Institute for the History of Medicine at Johns Hopkins, “Dr. A.C. Klebs at Seventy,” by B.W. Th. Nuyens, an article by John F. Fulton on Klebs and Cushing in Berne in 1931, various medical historical articles by colleagues, and Klebs’ complete bibliography. Nuyens here describes Klebs’ library at Les Terrasses.

This is Klebs’ own copy of the Festschrift. 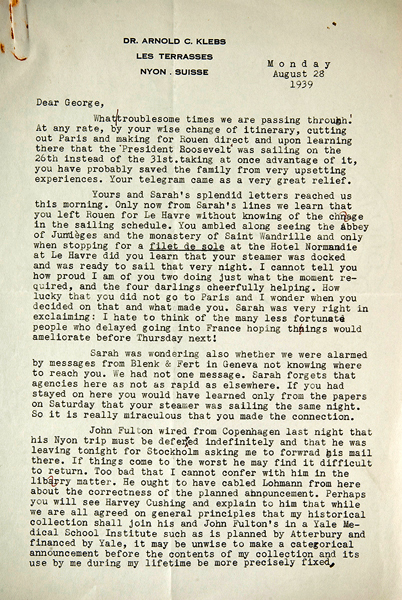 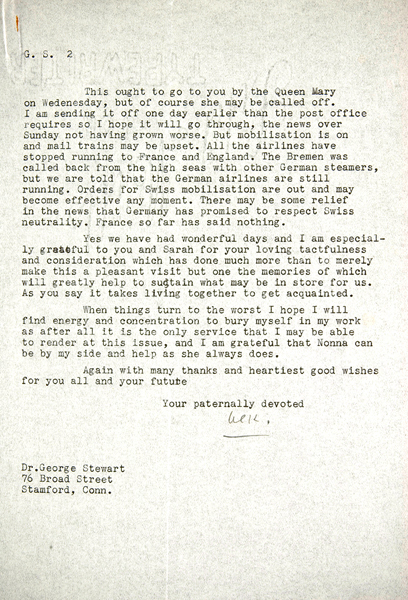 Klebs’ last years were spent at Nyon during World War II, no longer able to travel or be visited by American friends. Here Klebs writes to his son-in-law, who with his family has just escaped from Europe. He notes that John Fulton’s trip to Nyon must be “deferred indefinitely.”

By 1940, Klebs’ wife, Harriet was partially paralyzed and no longer mobile. Fulton kept Klebs informed of the building and dedication of the Library, although Klebs never was able to visit it. Klebs died of a heart attack in his library on March 6, 1943. His books did not arrive at Yale until after the war was over. 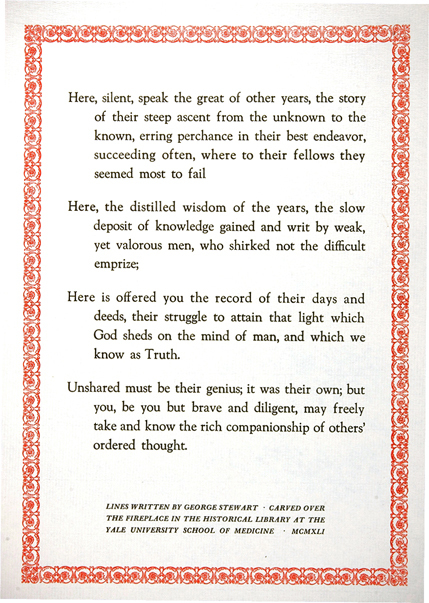 George Stewart’s Lines Engraved Over the Fireplace of the Historical Library, 1941

Klebs’ son-in-law presided over the formal dedication of the Yale Medical Library in June, 1941. He gave a blessing over the books and wrote the now-famous lines engraved over the fireplace in the Historical Library.