Diseases at the Battlefield

The Great War was a major breaking point for the history of medicine. Before the war, information about infectious diseases was limited and public health was something relatively new. World War One marked the way into the understanding that infectious diseases are caused by microorganisms, which contributed to the development of preventive treatment such as vaccines and antimicrobial drugs. For instance, deaths from typhoid were significantly reduced during the Great War because of a newly-developed vaccine. However, the same approach was not sufficient to stop the outbreak of pandemic influenza as the virus was only identified way after the war.

Among the various infectious diseases that were spread during the Great War, there were many lice transmitted disease, as in the case of trench fever. This was a very popular disease during the war that affected all armies and medical personnel. Besides being highly contagious, its recovery time was lengthy. Poor hygienic conditions and lack of public awareness contributed to the transmission of these contagious diseases. Yet, the militarization of medical research contributed at the same time to the evolution and development of knowledge and prevention of these same diseases. 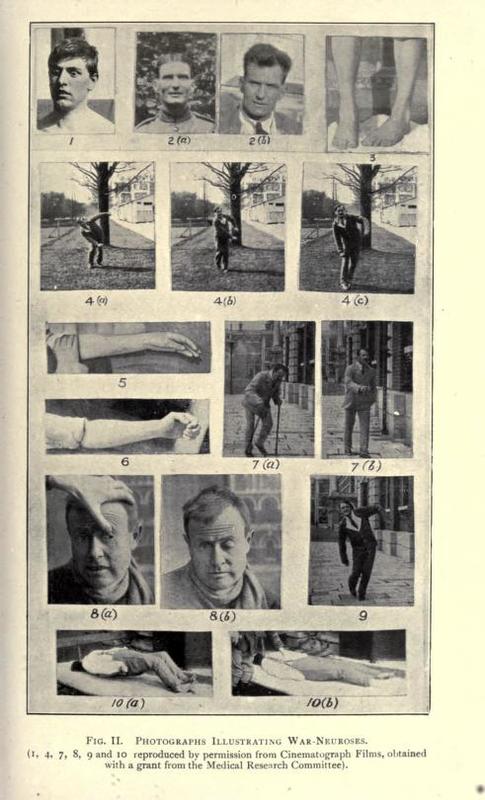 Even as physicians and surgeons during the First World War were treating horrific wounds and addressing casualties of battle, they were also confronted with an array of diseases in the trenches and military camps which afflicted the soldiers and contributed significantly to the war's medical care and mortality rates.  As the conflict was still raging, physicians such as Sir Arthur Frederick Hurst (1879-1944) were recording and publishing observations on these diseases using firsthand experience as well as the research of contemporaries.  Hurst's text, Medical Diseases of the War, first appeared in 1917 and provides an invaluable record of these afflictions, even drawing on parallel experiences from the Boer War and American Civil War.  It proved so useful that the work was revised and reissued in the 1940s as a second world war erupted in Europe. 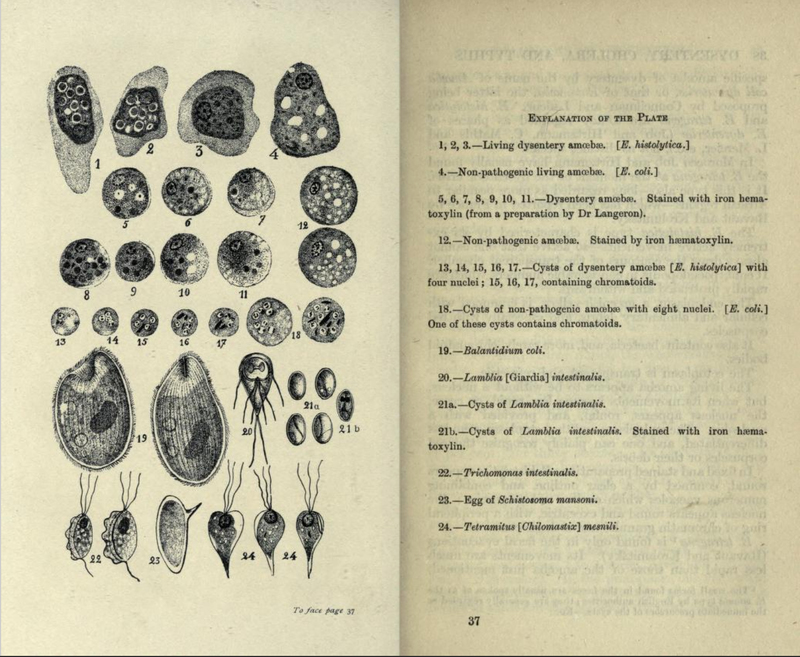 In addition to nervous disorders classed generally under the heading of shell-shock, Sir Arthur Hurst identified a number of infectious diseases commonly seen in the military.  Dysentery, in both amoebic and bacillary forms, was one of the most prevalent afflictions.   Hurst claimed ameobic dysentery to be unusual in Europe until British soldiers at Gallipoli brought it with them, probably from Egypt, in 1915; the infection was spread by flies and deposited on food, and contamination was spread easily through ineffective hygiene.  Gastric pain and chronic diarrhea are the typical indicators of dysentery and, if treated promptly, would rarely result in fatalities.  Many of the cases of amoebic dysentery, however, were followed by secondary infections of amoebic hepatitis and liver abscess, which could result in chronic ill health for months or years after the initial infection. 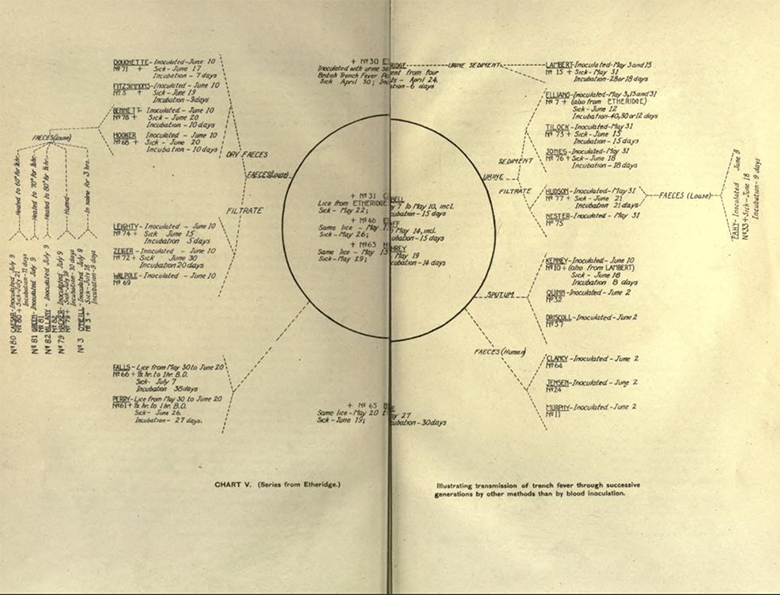 One disease unique to the First World War was trench fever, or "pyrexia of unknown origin," which was first identified in the British Army in France in the summer of 1915.  It had the name because it was "only observed among officers and men living near the trenches, and in the personnel of hospitals, especially among orderlies of wards in which there were patients suffering from the disease."  It was a mystery during the war, and Hurst speculated that some insect, possibly lice, was involved in the spread of the disease, as its occurrence was seen least in battalions with adequate provisions for bathing and the incidence of disease could be lessened by measures against lice.  Patients could be infected--and infectious--for long periods of time, and infection did not confer immunity to subsequent reinfection.  Trench fever also had an incubation period of several weeks, adding to the increased likelihood of spreading infection.  The fever occurred in short and long forms, and periodic bouts were common.  The disease, though debilitating, was never fatal, and it disappeared with the Armistice. 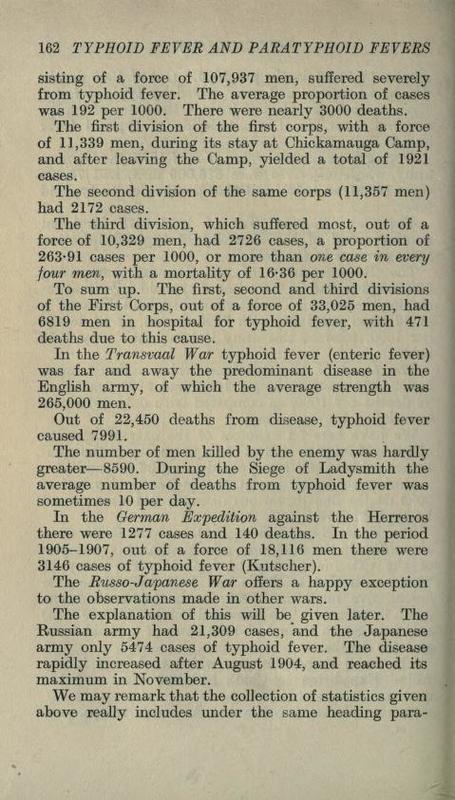 Paratyphoid fever or enteric fever, a form of blood poisoning, also became common during the war, particularly in the early years.  It manifested in patients as headache, abdominal pain, diarrhea, body aches in back, limbs, and joints, and shivering, and fevers lasting anywhere from one to eight weeks.  This was a less severe infection than true typhoid and had a lesser morbidity, though could still lead to death from pneumonia or toxemia.  Forces in the Mediterranean were peculiarly subject to this disease, far more so than in Europe.  Typhoid fever itself was relatively rare during the course of the war, due, in part, to inoculation efforts.  Arthur Hurst recorded over 20,000 cases of typhoid and paratyphoid fevers from 1914 to 1918, but just 1100 deaths, though it had caused a far higher mortality during the Boer War. 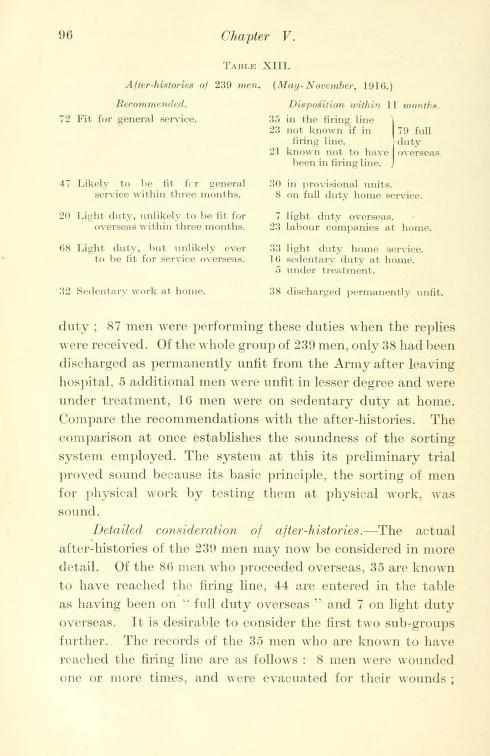 Soldier’s Heart or Effort Syndrome:  Following observations of American Civil War soldiers who exhibited “a form of cardiac palpitation … very rarely met with in civil practice,” J. M. Da Costa and other Philadelphia physicians identified a cardiac phenomenon which he termed “irritable heart.”   Known also as “soldier’s heart” or “effort syndrome”, this phenomenon was another ailment commonly seen in World War I.  Arthur Hurst stated that it “may be associated with prolonged mental strain and insufficient sleep, on a heart and nervous system weakened by the action of some form of toxaemia.”  The toxemia could be associated with a number of different diseases, including typhoid fever, jaundice, trench fever, and dysentery, but Hurst also theorized that excessive smoking could be a contributing factor.  The fever or toxemia weakens the system and exercise then leads to breathlessness, exhaustion, heart palpitations, and cold extremities.  Rest and moderate exercise provided the best relief.  Over 36,000 soldiers were discharged during the war from “heart disease” but many of these cases were not due to any organic defect but some form of effort syndrome. 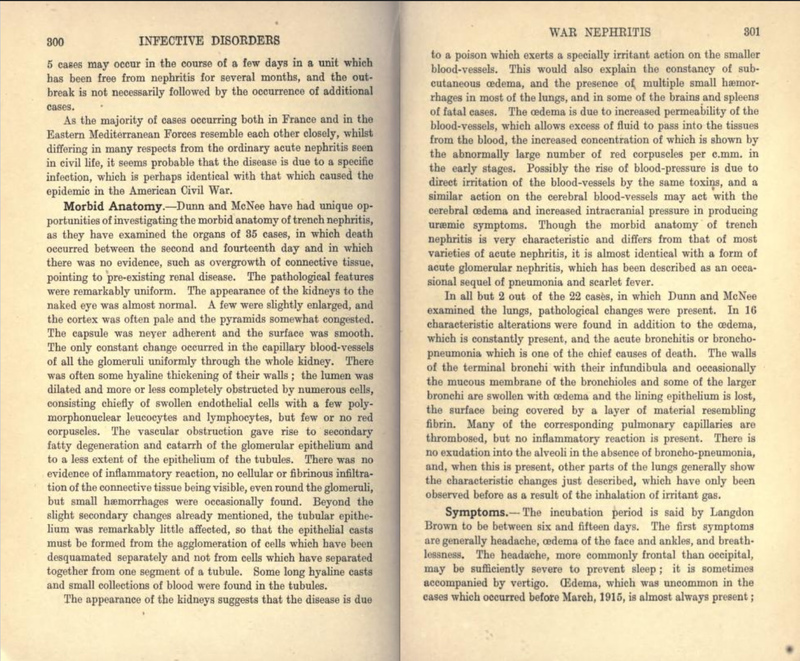 War Nephritis: The Civil War saw an outbreak of cases of acute nephritis, and the frequency of cases during World War I prompted Arthur Hurst to identify a “war nephritis”, probably due to some specific infection.  The disease was only mildly contagious and manifested itself by edema, severe headache, vertigo, and breathlessness.  Rest and diet were the recommended treatments.  The disease rarely caused death, though recovery could be a matter of weeks to months.  Hurst speculated that “it is not a specific disease, but is a form of nephritis occurring among soldiers and presenting certain unusual features as a result of the very different conditions of life of a war-worn soldier.” 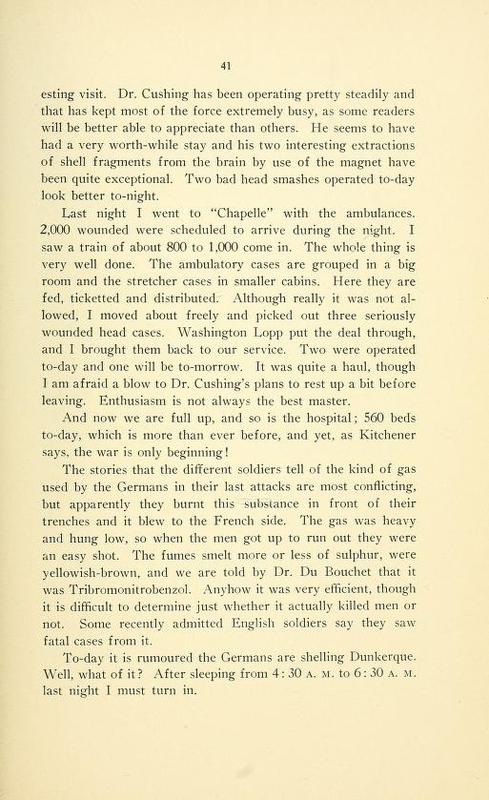 Gas poisoning as described in Eliott Carr Cutler, A Journal of the Harvard Medical School Unit to the American Ambulance Hospital in Paris, 1915.

April 1915 saw the first use of chlorine as a poison gas leading to asphyxiation at Ypres.  There were over 15,000 casualties, a third of those fatal.  The attack prompted the quick issue of respirators to soldiers.  There were two subsequent chlorine gas attacks in 1915, and phosgene was also used.   Gas shells were then introduced in 1916, and shells with mustard gas, the most effective of the chemical weapons, first appeared in 1917.  Gas poisoning manifested itself by eye and throat irritation, coughing, vomiting, and headache and could lead to bronchitis and pneumonia.  Many soldiers recovered from gassing but could suffer permanent lung damage, and, in the case of mustard gas, eye damage.  Arthur Hurst records over 160,000 cases of gassed soldiers treated at casualty clearing stations of the British Expeditionary Force.

Major George A. Soper of the U.S. Army, in a 1919 article in The Military Surgeon, reviewed statistical information on the experience of diseases among American troops in 1918 and concluded that:

"The large amount of sickness, which customarily occurs when large numbers of green troops are rapidly mobilized, has not been wholly avoided in this war.  The intestinal diseases and malarial infections, which in former wars constituted so conspicuous a cause of disability and death, were practically eliminated.  The sickness has been confined almost exclusively to the respiratory type of infections.  A large part of the respiratory disease was connected with epidemics, of which the influenza outbreaks which occurred in the spring and early fall were the most conspicuous examples.  It is probable that had it not been for the pandemic the death rate would have been little more than one-third of the rate recorded."