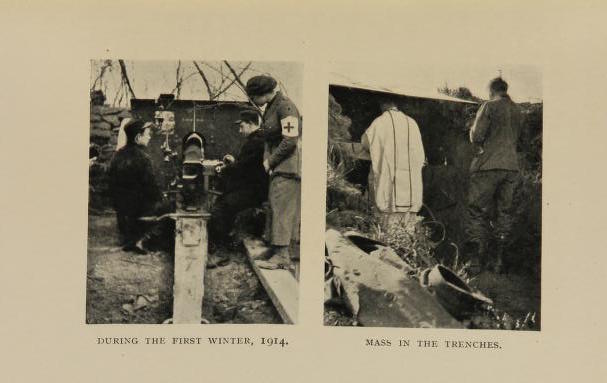 From Grace McDougall,
A nurse at the war: nursing adventures in Belgium and France. New York, 1917.

During the period of US neutral intervention during the war, domestic organizations like the American Red Cross saw in the conflict a great humanitarian crisis that beckoned large-scale medical relief. In 1914, the American Red Cross organized the S.S. Red Cross – the “Mercy Ship” expedition, which would carry medical supplies, and 170 trained nurses and doctors to Europe  to provide medical relief to soldiers and to fight against the calamities of war. Personnel from the Mercy Ship units served in hospitals in both Allied and Central Power nations, as neutral units throughout Europe: Paignton, England; Pau, France; Kiev, Russia; Kosel and Gleiwitz, Germany; Budapest, Hungary; and Vienna, Austria. See To the front in Europe's war; a photographic review of the equipping and loading of the steamship "Red Cross" and her departure from New York, 1914. 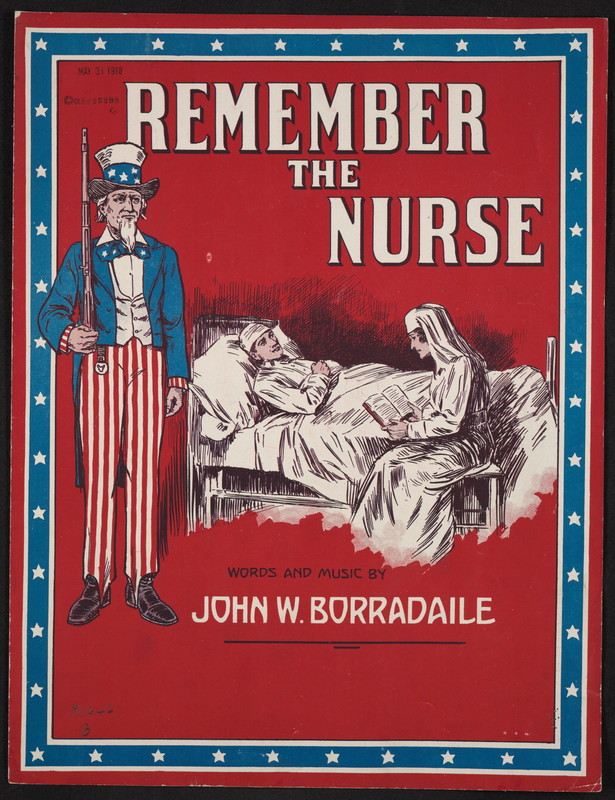 A sample of popular war music on nursing: Remember the Nurse, with words and music by John W. Borradaile, Philadelphia, 1918.

Established in 1909, the nursing service of the Red Cross had as its principal task to provide trained nurses to the U.S. Army and Navy  After US entry into the war in April 1917, the number of American Red Cross nurses enrolled in the nursing service dramatically increased to a total of 23, 822 nurses who served throughout the course of the war with Army and Navy Medical Units.  Lavinia Dock’s 1922 History of American Red Cross Nursing describes the contributions of nurses toward the war effort.

Although their work was exhausting and sometimes even upsetting, nurses were constantly romanticized in popular culture. The nurse as an angel at the bedside was a myth universally admired as we can see in the number of songs and literature that had nurses as their protagonists.  Many nurses were writers also, and the recount of their experiences became a popular literary genre at the time. While some accounts, such as Grace McDougall’s 1917 A nurse at the war: nursing adventures in Belgium and France, supported a heroic and adventurous portrait of nursing, others graphically critiqued wartime nursing. Originally written as a series of Atlantic Monthly articles and published in book form in 1916, Ellen LaMotte’s The Backwash of War: The Human Wreckage of the Battlefield as Witnessed by an American Hospital Nurse is a frank and powerful critique of the war based on her experience working as a nurse at a French hospital in Belgium. Its distribution was suppressed in Britain and France upon publication in 1916 and again when the United States entered the war, but it was later republished in 1934