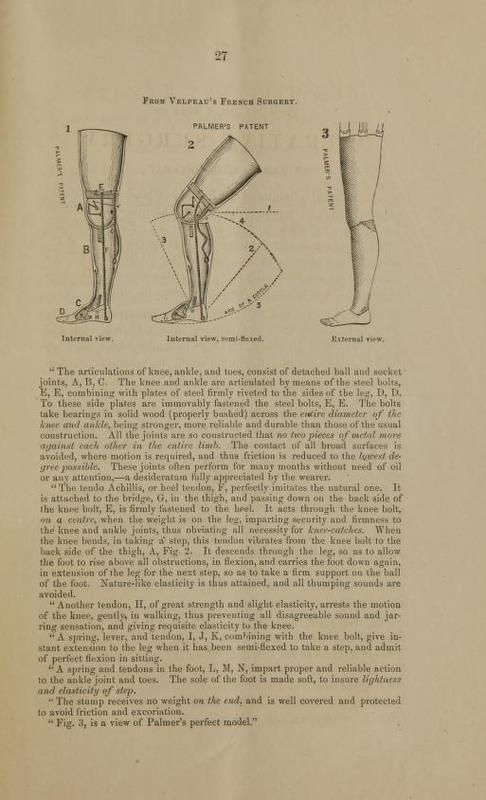 B. Frank Palmer. Palmer Arm and Leg: Adopted for the U.S. Army and Navy by the Surgeon General U.S.A. and by the Chief of the Bureau of Medicine and Surgery: Manufactured Only Under the Direction of the Inventor and Patentee. Philadelphia, 1865.

Prosthetic devices had long been in use before World War I. Benjamin Franklin Palmer, for instance, patented the first artificial leg in the United States in 1847, although even earlier technologies existed. A modern turning point in artificial limb development was the American Civil War in the 1860s, during which Palmer established the American Artificial Limb Company. Palmer’s Arms and Legs aided those injured servicemen who escaped or survived the infection and gangrene that killed many amputees. 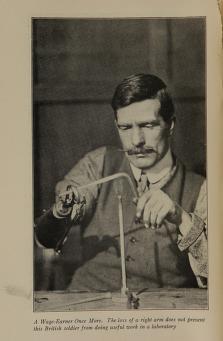 However, the unparalleled destruction of the First World War combined with improved emergency medical care resulted in thousands of servicemen surviving their devastating injuries and subsequent amputations. The situation demanded both increased production of artificial limbs and improvements in prosthetic device technology. In response, the Walter Reed General Hospital in Washington, D.C. opened its Artificial Limb Laboratory in 1917. There, doctors and craftsmen worked together to fit wounded veterans with artificial hands, arms, feet, and legs. The government aimed not just to restore these men aesthetically with prostheses but also to return them to the workforce. Douglas C. McMurtrie, director of the Red Cross Institute for Crippled and Disabled Men, published an extensive report on the rehabilitation of wounded veterans in the United States and abroad in 1919. He described the productivity that men attained by using prosthetic devices. Many of them even worked in the artificial limb industry constructing devices for others. Through trial and error, workers and engineers modified both prostheses and work equipment to better accommodate artificial limb users.

Prosthetic devices have evolved remarkably in the past century since the First World War, and Walter Reed’s Military Advanced Training Center continues to lead the way in prosthetic limb technology.

Frontispiece from George R. Fuller Co. The Making of a Man: Being a Description of Artificial Limbs and How They May Be Adopted by Those Who Have Suffered Loss of Their Natural Limbs. Rochester, N.Y., 1902

If you are interested in learning more about prosthetic limbs, download these books from the Medical Heritage Library!

Palmer, Benjamin Franklin. The Palmer Arm and Leg: Adopted for the U.S. Army and Navy by the Surgeon General U.S.A. and by the Chief of the Bureau of Medicine and Surgery: Manufactured Only Under the Direction of the Inventor and Patentee. Philadelphia: American Artificial Leg Company, 1865.