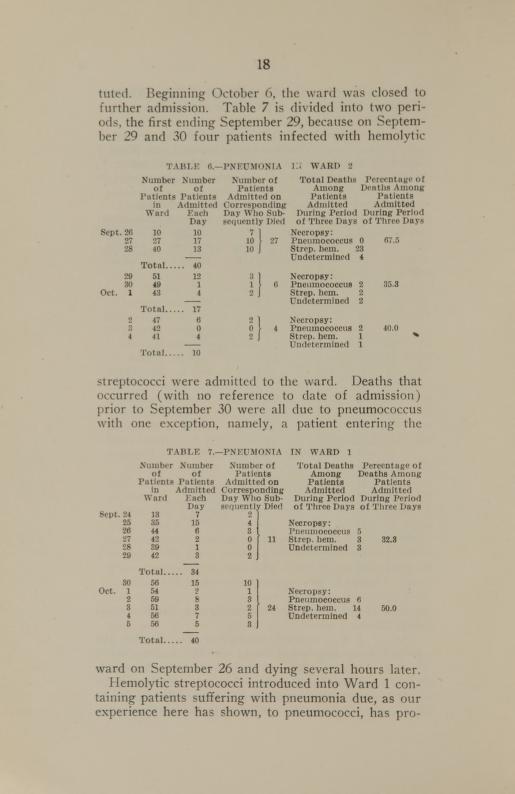 The Spanish Flu Pandemic of 1918–1919 stands out for its scope and virulence. The numbers overwhelm.  Five hundred million worldwide took sick, and up to a fifth of them died. The pattern of these deaths was atypical; while most dread diseases disproportionately attack the very young, the very old, and the very feeble, this flu--and its attendant pneumonia--attacked the youthful and vigorous as well. And the Spanish Flu outbreak was entwined with the Great War: conditions of war led to the flu’s rise and spread. In turn influenza affected the course of the war and of the peace that followed. 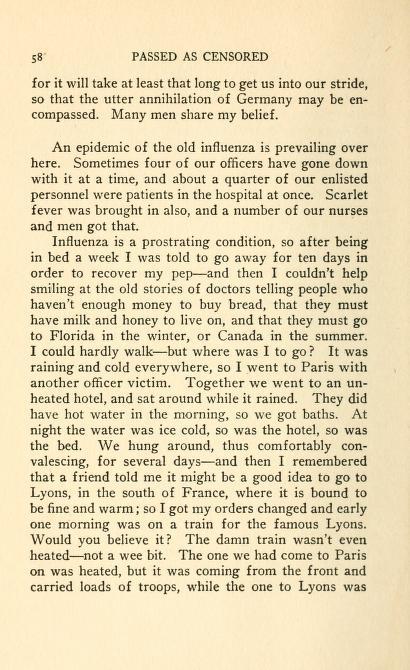 Influenza did not emerge in a single outbreak. Instead, it came in waves. The disease likely first arose in the United States in the spring of 1918. At the time the outbreak was not thought terribly out-of-the-ordinary, especially amid the spectacle of war. This first outbreak made its way across the Atlantic through the ranks of the massed troops and into the civilian populations. It was highly contagious and spread rapidly. “Spanish influenza had rounded the globe in four months following its appearance in the United States and duly earned a promotion from epidemic to pandemic.”  The flu’s next wave was far more virulent. Starting in mid- to late August, almost simultaneously in the port cities of Freetown, Sierra Leone, Brest, France (a major entry spot for American troops), and Boston, new outbreaks rapidly overtook the population. Within days, thousands were stricken, with many now dying. Within the military, this outbreak peaked in October 1918; with civilians, the sickest times came in November, followed by another wave starting mid-January 1919. The disease persisted even into 1920. Overall, 25% to 30% of the U.S. population sickened, and perhaps 5-6% died, half a million or more, before the disease ran its course.

The course of the disease was quick, with only a few hours separating apparent health from the onset of debilitating symptoms: high fever, weakness, and severe aches. Recovery took weeks. Not only did the flu debilitate, it killed.  At its most virulent, some 5 to 10% of cases proceeded to pneumonia, which more often proved fatal than not.

What led to its rapid spread? As an air-borne disease, it would have quickly traveled from person to person in any case. But the conditions of war—even of training, as the first Boston accounts were in troop training camps—made matters worse. War brought together persons from widely different backgrounds and immunological histories. Many American men were from the rural Midwest and had poorly developed immune systems, not having been exposed to the panoply of childhood diseases that those from urban areas likely would have experienced. Cramped barracks, the stress of training and of war, and poor food, clothing, and shelter all contributed to vulnerability. The constant flow of people made transmitting the disease all too easy—troop transports, supply ships, railroad stations; civilians coming on and off bases; doctors and nurses moving from one ward to another, tending the sick, all helped spread the flu.

Nor was there any treatment. In the days before antibiotics (or even any precise knowledge of the source of the flu, which was viral) only bedrest and nursing made any difference. Against the pneumonia that often followed, little could be done but hope. This flu also and inexplicably attacked the young. Mortality statistics showed that those in their 20s died at much the same rate as infants and the elderly, and so the men at war succumbed.

The flu affected the course of the war. It added to the burden of the armies in the field by taking so many men out of commission, suddenly and for weeks. German generals thought that the flu had stymied their effort for a decisive push to victory in the summer of 1918. In 1919, Woodrow Wilson, in the midst of the negotiations in the Versailles Treaty, came down with the flu. He noticeably lack the stamina thereafter to hold to his position of reconciliation and peace.

The Spanish Flu produced the largest single loss of life from any epidemic, ever. This human disaster, however, was in many ways overshadowed by that of the War. After two terrible years, with little to be done to alleviate its terrors, the flu receded. And just as a veil of silence was drawn over the horrors of war, so too did the Spanish flu outbreak of 1918-1919 fade from memory.

Interested in reading more on influenza during World War 1?  See these free, downloadable books and films from that time!