The Stress of War 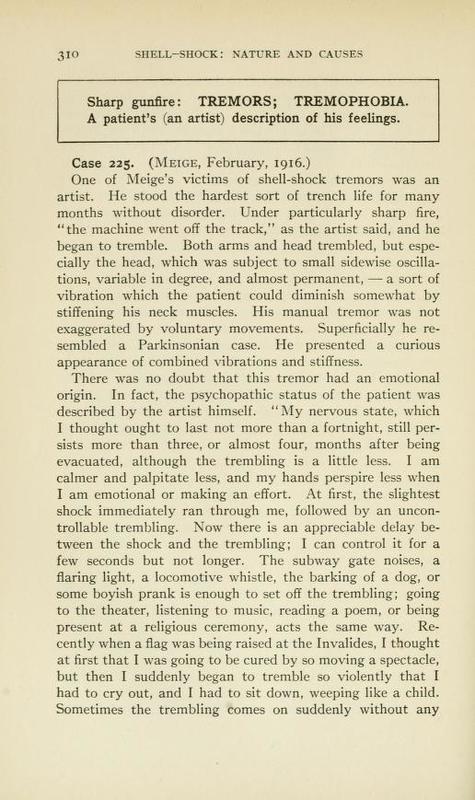 Page from Elmer Ernest Southard, Shell-shock and other neuropsychiatric problems. London, 1919.  Presented in five hundred and eighty-nine case histories, this study by E.E. Southard is a comprehensive analysis of diverse mental disorders, methods of examination and treatment.

The term “shell shock” first appeared in the British medical journal The Lancet in February 1915. It was used to refer to the strange disorders that some soldiers presented after nearby shell explosions. At first, British doctors believed that the condition was related to the physical effects of explosions. However, it was later perceived as “neurasthenia,” a nervous breakdown precipitated by stress of war. Therefore, shell shock included both conditions: the organic injury from a blast force, and the nervous breakdown resulted from it. Eventually it was used to make reference to the vast majority of mental disorders during warfare. 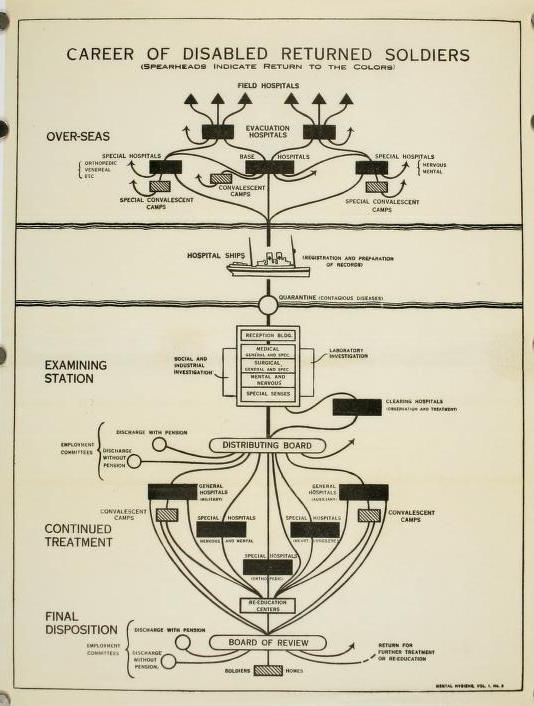 Chart on the "Career of Disabled Soldiers," indicating pathways of treatment and work.  From

The most common treatment for shell shock was, at the time, electric shock therapy. During the course of war, shell shock became recognized as one of the primary afflictions and new forms of treatment were incorporated, including psychotherapy. Although an estimated 10% of the military wounded were attributed to shell shock, there were not enough studies on this condition during postwar years, with limited methods of treatment during war and afterwards.

This film, War Neuroses : Netley Hospital,1917, shows the symptomatology of shell-shock in 18 British other rankers and its treatment by two leading R.A.M.C. neurologists in two British military hospitals towards the end of the First World War. Captions tell us the men's names, rank, medical condition, details of their symptoms and how long it took to complete the cure, which in one case was in two and a half hours. Clinical features shown include a variety of ataxic and hysterical gaits hysterical paralyses, contractures and anaesthesias facial ties and spasms loss of knee and ankle-jerk reflexes paraplegia war hyperthyroidism amnesia word-blindness and word-deafness. Although there are no precise details of the kind of treatment given, apart from the description 'cured and re-educated' we do see a little physiotherapy and hypnotic suggestion in treatment, and of 'cured' men undertaking farm-work, drill and a mock battles entitled 'Re-enacting the Battle of Seale Hayne / Convalescent war neurosis patients'.